How to Unchoke a Cherry Tree 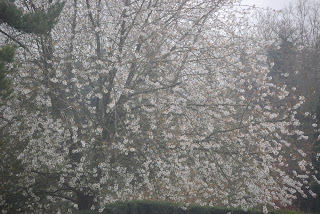 Exhibit A is a normal cherry tree in full blossom in May — the sort of thing the young George Washington had it in for. Notice the cherry blossom (as in shoe polish) which will yield cherries in the end for the birds to pinch before we get them (“feckin’ birds” as Father Ted’s friend Fr Jack used to say). Normal cherry tree. 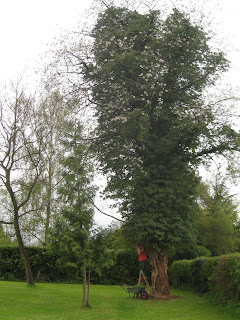 Now this weird old thing, Exhibit B, is a cherry tree that has been systematically garotted by Ivy for the past 40 years. Note the weird colouring, lack of blossom and spindly shape. I gather the Ivy isn’t actually parasitic — it just clogs everything up and voraciously steals nutrients. I’m somewhat amazed that poor old Mr Cherry has managed to survive at all. 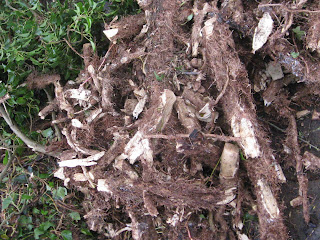 Lucy has now hacked out a thick mass of offending accretions, so as to give the real tree a chance to live again. Some of the tendrils of ivy were two inches thick! It’ll be interesting to see the tree next year, especially once ivy higher up the bark dies and comes off. In a few years time the birds may have two trees worth of cherries out of the garden here. 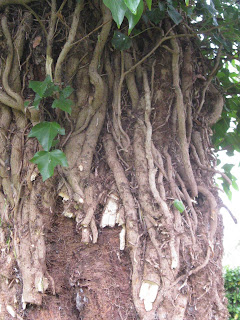 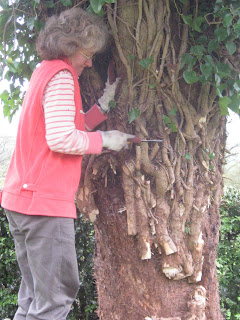 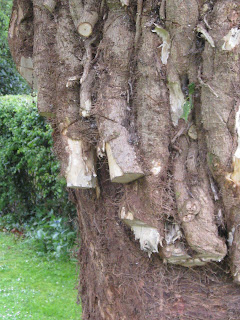 And that, friends, is how Elizabethans saw the English Reformation. Their radical method was to pull everything back to the scriptures and creeds. That, they believed, would enable the secondaries to look after themselves, and the whole tree to flourish. Hmmm...
Posted by Bishop Alan Wilson