Pittsburgh: the parting of friends? 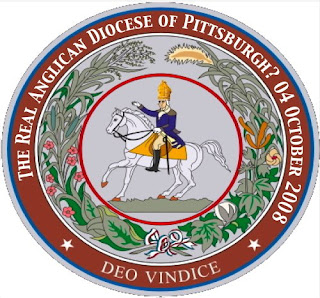 I am not expert enough, or fool, to enter seriously into the serpentine constitutionalities, let alone politics, of US Episcopalianism, but one or two people have asked me for a reaction to the recent Pittsburgh Diocesan Convention. Perhaps I can annoy everybody all round, equally:

To be true to our beliefs, it would be far better to bless each other in separating, each going our own way than to continue the internecine warfare of winner-take-all. It will take courage to let each other go and to bless each other in the going. We have an opportunity today to make this convention a testimony to love and forbearance among brothers and sisters in Christ. To be a blessing to each other. Do we have the courage to do it? Will we do it? Can we forgo parliamentary shenanigans that in the end will cause more pain and more distrust and bless nobody? Can we get on with it decently and in order?

I suppose some will feel that this noble view does leave open the question of where the truth of the matter actually lies, as well as drawing discreet veils over past “parliamentary shenanigans” on both sides that have caused pain and distrust, but its sentiments and intentions are surely the best...
Posted by Bishop Alan Wilson

I guess the "rightness" of what happened this weekend depends on whether you believe that the leadership of TEC have apostatised from the historic Christian faith. If the answer to that is "yes" then Pittsburgh leaving for the Southern Cone is a moment of courage, a principled stand for truth. If the answer is "no" then they're schismatics tearing the church apart. There is practically no middle ground.

I cannot disagree with Peter more. Perceived theological error on the part of Episcopal Church leaders might be a justification for leaving The Episcopal Church. (I consider this hypothetical, as I do not personally believe church leaders have abandoned the Christian faith, but this is not essential to the point I want to make here.) It is not a justification for disobeying church canons one has sworn allegiance to merely to seize power and real estate. The “realigners,” if they were seeking to be pure Christian dissenters from The Episcopal Church, should simply have walked away empty handed.

Perhaps I can put it more succinctly. I am not one for proof-texting, but I’ll make an exception, in this case. I offer to the “realigners” this biblical admonition: “Thou shalt not steal.”

I'm sure these reflections convey the reason what is happening is happening. The use of the word apostasy inevitably reminds me (because it was my academic field) of Keble's assize sermon of 1833, on national apostasy. The sign of this for him was the suppression of three irish bishoprics, but what is most interesting is his counsel about what to do in the face of apostasy — sincere intercession and remonstrance: "calm, distinct, and persevering, in public and in private, direct and indirect, by word, look, and demeanour, is the unequivocal duty of every Christian, according to his opportunities, when the Church landmarks are being broken down."
Heigh ho. If present disputes spawn a holiness movement, we shall all be blessed. By their fruits ye shall know them, I suppose. We'll see. I would caution against simplistic interpretation of the so-called ralignment movement. In the summer I met Conservative Evangelical bishops who have had absolutely no truck with the gay movement, but have still have had parishes "realign" seemingly inspired by personal politics and ambition.