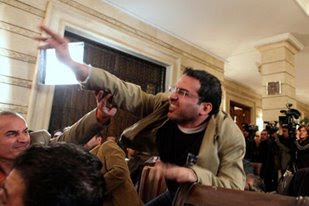 Praying the Bible liturgically every day you don’t half get to know the bits that aren’t headlines or sound bites. Seldom do you see them enacted before your very eyes, like Muntadar al-Zeidi’s dramatic gesture at Sunday’s Bush Iraq presser — a graphic example of the ancient Semitic gesture of disgust and contempt to be found in Psalm 60:8 (Doublet at Psalm 108:9): עַל-אֱדוֹם אַשְׁלִיךְ נַעֲלִי — Over Edom will I cast out my shoe (Coverdale).

The curious can regularly encounter this gesture in the prayers of monastic communities at around 5.45 a.m. every Wednesday and Saturday morning. None of us are at our most compos mentis that early. Jerome rather softened it (“In Idumæam extendam calceamentum meam,”). The Hebrew is down and dirty – (root שלך: looks like a straight hiph‘îl)— to chuck/ pitch an offending object, like the rocks God tossed down from heaven in Joshua 10:10. The 1945 Latin liturgical psalter headed back towards the orignal (“Super Edom ponam calceamentum meam’’), but 1980 went a bit soft — “Super Idumæam extendam ...” Call me old-fashioned, but Coverdale’s BCP hit the nail on the head.

President Bush himself was correct — This is the 8th century BC Semitic equivalent of giving the finger on the freeway, but more considered, contemptuous and rather more dramatic. It was very striking to see this done on cable TV, and eliciting so much comment. The Bible speaks today! Whatever next? ritual shaving for humiliation? Cutting animals in half to make a contract? Moloch?

If it takes some heat out of the situation, the Ship of Fools has a Biblical Curse Generator, where you can smite your enemies with boils like Amalekite Dogs...
Posted by Bishop Alan Wilson

While it wasn't enacted before my very eyes, I had an experience 30 years ago that came close.

I was staying with a group of church workers living in a kind of commune in Johannesburg, among them Richard Kraft, who later became bishop of Pretoria, and John Stubbs, now dean of Grahamstown, but then bosser-up of a church youth leadership training programme called Nomads.

We went in for evening prayer having just had news of the defenestration of Phakamile Mabija, a church youth leader in Kimberley. John was especially upset, because Phakamile had been part of the Nomads programme, and some said we should leave out the psalms to shorten it. But we asked if we could read them anyway, because God has something to say through them.

So we read the Psalm, Psalm 94, from the Jerusalem Bible, which says:

You never consent to that corrupt tribunal
that imposes disorder as law
that takes the life of the virtuous
and condemns the innocent to death.

And even after 30 years, that still gives me goosebumps.

Ritual shaving for humiliation was done to relationship-collaborating women after the Second World War.

Here is a place to get your shoes for throwing. Already it is the thing to do via mail. Lot of "finger pointing" going on around the world.

I wonder on the connection to Deut.25:9

"then his brother's wife shall go up to him in the presence of the elders, and pull his sandal off his foot, and spit in his face; and she shall answer and say, `So shall it be done to the man who does not build up his brother's house.'"

Thanks, Steve. it's strange how the parts of the psalms they used to put in brackets in the ASB because they were supposed to be too ungenteel for modern use won't lie down; really powerful to get a connection like you did...

Thanks, Adrian for the Collaborateurs reference — there are some scary pictures of the phenomenon — they always look to me like shop mannequins...

Many thanks for the virtual shoes, Ann. I gather the guy is now becomeing a big hero around the Arab world; I've liked and disliked US policy around the place off and on since the Vietnam war, but I don't think I've ever known a president held in such near universal loathing, ridicule and contempt outside his own country. It's a dangerous and very unhappy place for all of us to be. GWB’s "Jimmy Crack Corn and I don't care" response really speaks volumes. All the next guy has to do is demonstrate 1% self awareness and all sorts of people will heave major sighs of relief, whatever their politics.

Erp, is this the levirate divorce thing? If I remember aright, and I'll look it up after senior staff today, it's how you divorce, a la book of Ruth. Victorian commentators related it to Bedouin custom, and the casting off of the shoe was a public "act of consideration" as we'd call it in English contract law, that brought public shame on the object. Thus the prophet — where is your bill of divorcement...? It's a sign of public humiliation. Strikes me this is the ggheaded version of the basic gesture.

It was for failing to follow the levirate custom and not taking your deceased male kin's childless widow as wife. It was not a divorce since they were never married.

At least a shoe might be a bit better than Onan's punishment for failure to follow the custom.

The very same — I looked it up this afternoon, and it's one bit of the OT Henry VIII wasn't too crazy about, I believe! Agree about Onan (and refuse to acknowledge the joke about the old lady with the parrot called Onan who was always spilling his seed...)