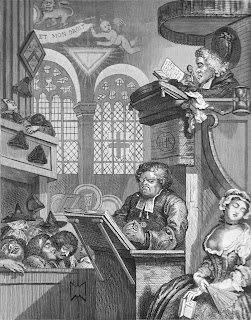 When and why did the English stop going to Church en masse? Earlier than we think, perhaps. The Church in an Age of Danger, Parsons and Parishioners 1660-1740 is a rewritten PhD thesis by Donald Spaeth, that pokes about in the unfashionable basement of popular religion in 17th/18th century Wiltshire. He suggests the rot set in earlier than we like to think, and for relational rather than theological reasons. 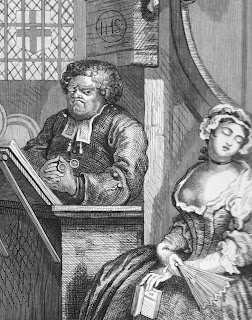 Health warning: I have received considerable spiritual benefit from Evangelical and Tractarian revivals, and spent 21 years of ministry as a resident parson in a parish. What follows is hypothetical historical sketching, not bitter twisted comment on any of those fine things in themselves. But, remembering Ronald Reagan’s wise words “Don’t be afraid to see what you see,” here goes...

Evangelical and Tractarian historiographies have tended to suggest their people saved the Church from terrible neglect. 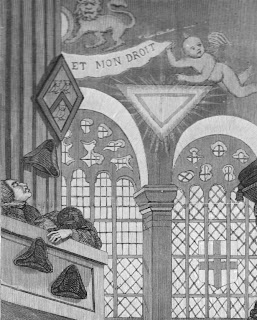 Terrible it may have been, but, paradoxically, far more people went to Church. Every place had its own story, but the mass of people seem to have become detached from their village churches as relationships broke down. The English did not become anticlerical like the French did, but got into habits of ploughing their own furrows, as the Church became more top-down, professional and exclusive.

So here’s one possible historical narrative of how congregations dwindled. 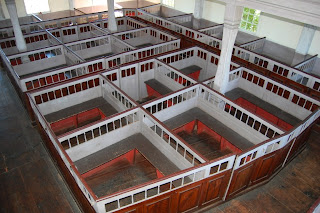 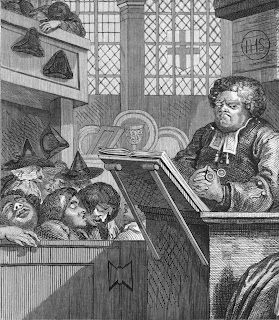 All three waves brought new model professional guardians of the sacred, each with powerful authoritarian notions of how things should be, and a tendency to impose their will regardless. Each new wave recruited smallish groups of enthusiastic blue eyed boys & girls, but alienated all the others. As people moved to industrial towns in the 19th century, the village church was part of the social baggage they gratefully left behind.
Et Voilà! Any questions?

A very interesting analysis, Bishop. I'm going to have to digest this a bit more, but I think, without trying to be overly simplistic of a complex situation/problem, if I could sum it up in a few simple words, what I think I hear you saying is that church attendance has to do with the relevance of religion in people's lives - which is, in and of itself, a very complex issue. I'm also thinking of the American book "Bowling Alone," which has a great deal to say, to me at least, about declining church membership/attendance. "The Tipping Point" is another helpful book, if you read it from the reverse side of the mirror. Again, very provocative thoughts. Thank you.

The explanation for difference between European and American churchgoing has been, at the European end, social class, made visible though these theological movements, and at the American end, the maintenance of religion as a means of identity, social gathering and selling themselves.

Elizabeth, thanks for the Bowling alone reference. I'm sure it is relevant to churchgoing behaviour. In the US going to Church was an expression of community and identity, where in England it was less voluntary, whilst not going to church was an allowable form of social dissent. So Adrian, I'm very much with your analysis. In the last fifty years, churchgoing has become a much more voluntary activity in the UK — people opting in, rather than holding it to be a social norm with the majority opting out, as they did from the 18th century on.

I also suspect that churchgoing statistics always have had an element of mythology about them. Stories of "successful" eras often don't stand up to scrutiny of the registers.

The issue that is emerging with a lot of people I meet is that they are giving up on church because it doesn't reflect what they find genuine in the spirituality.

Thanks, Mike for an inconvenient truth. I find similar things to be the case, sometimes about our attenuated spirituality (people find our buildings most spiritual when we're not there!), and also about discriminatory/ arbitrary behaviour by Church leadership, in church and over appointments, diversity etc. For them this is a profoundly moral issue; as surely for us all? Major challenge.

Resident gentlemen clergy after residence was legally enforced in the early nineteenth century. In came big Georgian rectories, out went peasant curates who were less learned and often part time, but radically incarnational in village life.

Bishop Alan that change in the model jumped out at me, especially the loss of clergy who were "radically incarnational in village life", a loss, indeed, it would seem to me. Of course, I'm simply a observer from across the pond, but it surely seems a lovely idea and a sad thing to lose hold of it.

I live in an area, south Louisiana, in which it is still the norm to attend church and one makes a conscious decision to opt out of church. However, church attendance is in decline, and who knows what the young people coming up will do. My thought is that quite a few will opt out.

Again we agreeably engage over the issue of Church Tribalism and the problems caused by it. I am finding it encouraging and inspirational. Prophetic even.

At a recent interview in another diocese I was pushed to label myself in terms of churchpersonship as I didn't fit into their pre-defined boxes. I had to explain how I saw the spirit of the prayerbook and Anglicanism as both reformed and catholic, sacramental and evangelical, centered and deep.

We discussed before mixed 'theological DNA'. In the news today the problems of pedigree dogs at Crufts and the weaknesses they have inherited from inbreeding were highlighted yet again. Perhaps our Church is suffering the same problems.

Or to use an agricultural analogy is growing in a limited soil rotting us?

And yet Christians rooted in a strong identity seem to be far more effective in discipleship. Especially in urban areas.

So how can we be rooted but not rotted? How can we regain a strong identity in the richness of the Christian faith without becoming ineffective mongrels?