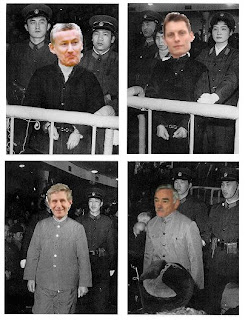 Today Four Big Bankers were wheeled into the Treasury Select Committee for Ritual Humiliation and Group Self-Criticism. There they confessed publicly to various errors of judgment, crimes against the workers, and sundry false consciousness. I hope we all feel better. I’m slightly surprised these Titans had no idea anything like this might happen. People reading, for example Kevin Phillips’ Bad Money, appear to have been better informed about these comrades’ businesses than they were themseles. Cost? £17·39 for awareness these comrades couldn't manage on £4·4m a year. Why, Jon Molton warned them a year ago on national TV. Heigh-ho.

Simple minds thought the Gang of Four got paid telephone number sums of money every year because they took big risks. But apparently they didn’t. We did. They just got the money anyway. Big sorry. Surprisingly, I’m told none of the four had done any banking exams. Really? So they were only amateurs anyway. Big Multimillion pound Banking, like flower arranging, Gilbert & Sullivan, and Morris Dancing, turns out to have been a mainly amateur activity in the UK. Perhaps we should all have a go. Mary Poppins will be revolving in her grave.

I don’t think they will need to be beheaded. Instead someone like Mr Darling should be very cross with them. Furthermore he should write them a letter telling them he is very cross. Then, when we have all stumped up a few more billion pounds, it can start up all over again, and the good times will roll? or maybe not. Perhaps we will not be returning to 2007 again, any of us. Make no mistake. We have all been collectively foolish, fuelling what Andreas Whittam-Smith calls our banking “Doomsday Machine.” (h/t Ruth Gledhill, for a really helpful link) We’re all in this thing, like it or not. These were just ordinary people, doing their jobs as best they could; we mustn’t let their extraordinary wages blind us to that disturbing fact...

Now is the time to put hefty taxes on bonuses associated with senior jobs in the financial sector, It's not as if they'll slink off and get jobs somewhere else if we do that now.

I'm just a nice litttle vicar, and thus reasonably impervious to considerations of worldly lucre (:-/), but I have to say I think you're right, Tony. It has done these people, and millions of ordinary savers and other sundry mugs, no good at all to pay them huge sums of money on the basis of what turns out to have been low accountability when it all goes wrong, in a regime where they have often, apparently, paid lower marginal rates of tax than their office cleaners... Something has been going distinctly rotten in the state of Denmark...