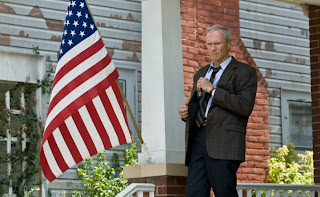 Clint is back in force in Gran Torino. He plays Walt Kowalski, Polack Korean War veteran, retired Ford Worker, and all round old git. Don’t call him Walt, though. He lives as a widower with dear old Daisy the Dog in a run down suburb of Detroit, if you can imagine such a place.

Walt is semi-detached Catholic, and spends much of the first half of the film grunting his disapproval of everything and anything in a kind of deep throat Hrrrmh, that sounds like a Model T starting up on a frosty morning. It’s the best dyspeptic Hrrrmh there is, right up there with Marge Simpson’s, and fractionally deeper. It rattled the light fittings in the High Wycombe fleapit, anyway. 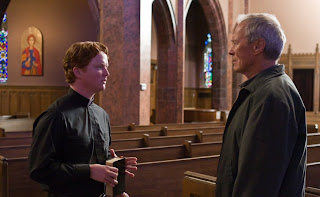 Walt is profoundly damaged goods. His dead missus used to try forlornly to make him go to confession and clear the decks. Sadly stripling whippersnapper priests are another Walt dislike, and he hasn’t been in 50 years.

Actually when we get to hear his confession many may wonder what all the fuss was about — one of the slight plot infelicities that make this a very good rather than a great movie. Walt’s prize possession is his immaculate 1972 Gran Torino, which he did not buy second hand from Starsky & Hutch, but which he built with his own fair hand back in the days when Fords were Fords. 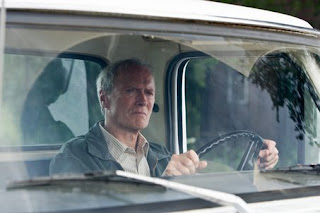 The whole area is going to the dogs. Good ol’ fashioned blue collar whites are moving out and gooks and worse are moving in. Hrrrmh. As Walt contemplates the descent of his neighborhood into punk dystopolis, he has only his Korean War memories to comfort him, and you don’t wanna know how nasty they are. Hrrrmh. Just to make things even worse, Walt’s own family have gone all middle class on him; his grand-daughter’s belly button peeks out from under her tank top at Grandma’s funeral (hrrrmh) and, worst of all, his son now sells Toyotas (double hrrrmh). 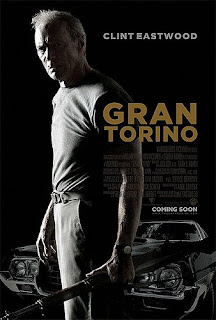 Walt could do with a chum like Morgan Freeman to give him wisdom, or even a nubile female boxer in need of training to cheer him up, but this is Detroit, remember? Instead, the Chinese move in next door. There’s no proper man of the house, only young Thao aged 16 or thereabouts. Young Thao has nasty cousins, and they put him up to an attempt to pinch Walt’s Gran Torino; a thoroughly bad notion. After some Dirty Harry sorting out of various local punks, including Thao’s nasty cousins, the Chinese start leaving yummy whole glazed pigs on Walt's doorstep — unusual behaviour, and the pigs go straight in the bin of course, but it begins to melt the old so-and-so’s heart. 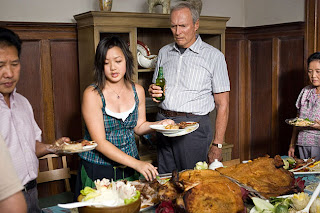 Young Sue, leader of the Chinese next door, is cheerful, indeed spunky, in a thoroughly nice All-American sense of the term. She befriends Walt and draws him into her world, using Duff beer. I now have to adopt the voiceover style of a ghastly Marks and Spencers food ad campaign this side of the pond and reveal that these are not any old common or garden Chinese. These are handpicked Hmong Chinese, ejected by goddam commies from Laos. Walt takes young Thao in hand and sets him up for a life of his own with a manly trade. But the baddies need dealing with, and these days that requires not Dirty Harry annihilation, but a redemptive sacrifice. 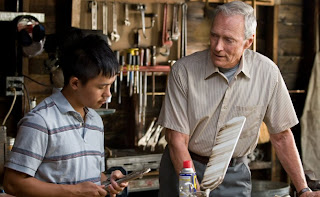 Suspend your disbelief and this is a delightful, even inspiring film. It blends Clint’s early rough justice lawman thing with his late dyspeptic heart-of-gold thing. The infrastructure that carries what is actually a far more improbable plot than it seems at the time, is beautifully crafted and visually superb. 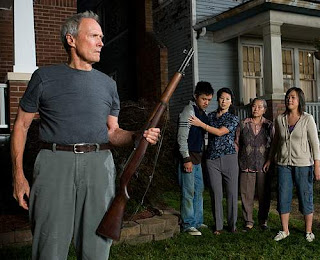 Yes, it’s hokum, I suppose, with necessary but slightly unpleasant Archie Bunker racist undertones. However this is a very good movie indeed, and Lucy and I thoroughly enjoyed ourselves. I am slightly surprised it didn’t fare better at the Oscars, but I’m not sure which award would have been right. Direction was a tad slack early on but tightened up beautifully as the story ascended Mount Improbable.

Clint must have a shelf of lifetime achievement awards, and this movie amply justifies them. Dyspeptic but profoundly decent old git is Clint’s natural métier these days, and he plays it with the same effortless superiority Lassie exhibits playing a Border Collie. All right thinking people will salute him and enjoy this movie for what it is; almost as good as Million Dollar Baby, but probably not quite.
Posted by Bishop Alan Wilson

The whole "Dirty Harry" cult mystifies me. The character is repellent, a violent policeman with no redeeming qualities. Surrounding caricatures like this with even more repulsive villains doesn't make them heroes. "Damaged" is about the right word. I found Eastwood's Flags of Our Fathers quite watchable but if this is Eastwood back in "Dirty Harry" mode I think I'll give it a miss.

An entertaining & stimulating review for a film I plan to see soon. I've never heard Clint compared to Marge Simpson, but now I will never forget that. Inspired!

enjoyed your correction re: bovver/hovvver @ silliman's blog today,so looked you up.

Just saw this today and thought it excellent.

Isn't the real confession scene the one where Walt speaks through the grille to Thao in his house? Visually, the mise-en-scene (and its proximity to the 'thin' confession with the priest in church) is compelling in the suggestion.

Then, having confessed to what it is like to have killed a number of young Korean men, he seeks his own penance and absolution by sacrificing his life to a group of young Hmong men, in order to save others from their terrorisation.

Many thanks for great comment; Tony, I understand what you're saying. I suppose Dirty Harry is very appealing to those who like their lawmen to be maverick shootists... which doesn't include me. There's this tremendous ambiguity about law and government in the US Right narrative. On one hand it's the most litigious place on earth, with people going to law over the heat of the coffee in MacDonalds. On the other hand there is still a political appeal in the right to bear arms — apowerful irrational instinct that the government is about to come up the road, or the British, or someone the hell, and you will have to pull out your six shooter and defend your family in the log cabin. Do maverick lawmen, from John Wayne to Clint Eastwood somehow connect these two incompatible instincts about how life works into a seamless whole?

Thanks, Dave. Bill, not so much a correction as a piece of cultural detail that I suspect you'd have to dig quite hard to find in a PhD thesis on Andrew Motion. And, like you, I'm not sure there'll be too many of those, and we'll have to wait 50 years for it anyway, even if anyone ever bothers. Missed the Wrestler at the cinema, drat!, because I just didn't have time that week. Have heard great things of it. Agree about the subtle way Sue comes over in this movie, and also the gender dynamics.

Paul, thanks for a connection which I had not instantly made, which fabuously opens up that bit of the plot which was niggling with me. I wasn't quite sure what to make, apart from the obvious, of his giving the little lad his medal. Is this the tangible, sacramental sign, of absolution and hope?

I guess, if we are content to follow the RC imagery allusions, we could read the medal on Thao's chest as a Sacred Heart.

I think, though, I would be content with saying this is a twist on the tradition of 'The Red Badge of Courage', as started in Civil War stories by Stephen Drane.