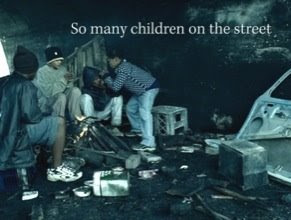 As someone who leads a strictly non-profit, but I hope not entirely unproftable, life, I don’t do advertising, but my eye was caught by the Trail of Hope. In a year Slumdog drew attention to Indian Streetkids, two friends from South Africa have hatched a vision for creating a community of Capetown’s homeless young people, under the auspices of the MyLife foundation. Albert Arcona and Tendai Joe are riding motorbikes from Capetown to London this autumn, taking in various sights along the way — the HIV/AIDS context mkes the need particularly acute, and anyone interested in Streetkids, Zimbabwe, South Africa, could well want to be part of this project.

Meanwhile, Beyond the Fringe taught us there is a time in any struggle when a pointless gesture is called for. As thousands take to the streets of Tehran, there are not many oogedy boogedy Ayatollahs using Twitter, but we know many democracy campaigners are. If they open the main Twitter stream, which we know they are using as a significant tool in getting and keeping their act together, and see a large number of green avatars, they know they are not alone, and have an instant database of overseas friends and allies.

The proposal is that anyone anywhere else in the world who supports Iranian democracy can “Green their Avatar” to show solidarity and support to people who need it, when they need it. So, that’s my futile gesture for a bit. I'm greening my Twitter Avatar for a while in support of Iranian Democracy. If you’re a Real Twit, why don’t you?
Posted by Bishop Alan Wilson

Thank you for posting this.
Done

I did this the other day on Twitter -- thanks for bring it up again I am quite stunned by the Iran situation - pray that we can live in hope and it will come 'round right as the old Shaker song says.

I syspect that it depends on whether the protesters' cause is seen to benefit Western bankers and oil magnates. If it is, the protesters are the good guys and the police are the bad guys, but if those parties aren't likely to benefit, it's the other way round.

Just imagine if the Sky News reporting on the recent economic protests in London were transferred to Tehran, with suitable changes of name -- it might sound like quite a different story