Beware the Jabberwock, my Son 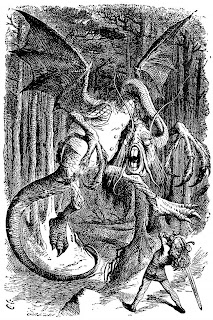 Interesting times battling against “followersfree.com” an evil Twitter Spambot thing! This is a first for me, and, let it be said, entirely my own silly fault. Whilst in the general Twitterstream at the weekend, I noticed a grow your numbers scheme called “followersforfree.com.” This, I thought, was a reincarnation of a similar automated scheme Twitter banned earlier this year which included the ability to follow/ unfollow people en masse. I have at the same time been trying to get round a change in the Twitter display that doesn't show immediately whether you can direct message people you follow, in other words whether they are following you. I thought I’d try and see if this site held some way of getting multiple follow/ unfollow/ people listed, as this is a classic pattern indicative of activity by spammers and the like. Big mistake.

Do not touch this site with a bargepole. The advice Twitter itelf gives is good — never give out details to any scheme that claims to be able to build your numbers. Within minutes I found this evil SpamBot was sending out a message in my name, which had transferred across to publish through Facebook.

I then tried to unsubscribe, and blow me down, it sent out another spam in my name to say I'd unsubscribed. I tried changing my Twitter password, but it kept on changing back! I tried suspending access privileges on my account, but it hadn't got these in the first place. Every time I changed password, out went another evil Spam message!

Twitter has currently limited my acccount’s ability to change password, probably as a reaction to all the gyrations. I am wondering whether the evil bot has some way of changing my password back (I can’t see how that would work). In the meanwhile I need to say:

sadly i have found it amusing - this from a woman who once activated so many virus protectors and anti spam agents that they cancelled one another and wrecked the computer :o(

If it's any comfort, you're not the only one to have gone down with spambotflu - one of my followers, Chloe, got eaten by one today. If you want the sordid details, which conveniently highlights a list of similar sites to avoid, do this twitter search: http://twitter.com/#search?q=chloelowewew11.