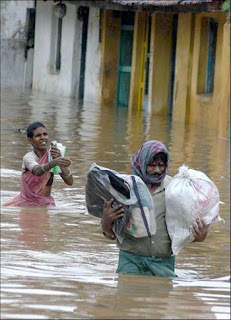 The Diocese of Nandyal continues to respond to the grave situation it finds itself in: Three items of news, two from India and one from Oxford speak of immediate action — It’s sometimes said that the local Church, when it is most truly itself, is the hope of the world. It’s time to put that hypothesis into action... 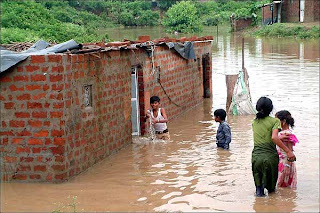 I am extremely thankful to the Churches, congregations, Institutions and individuals for their prayers, support and contributions in this hour of crisis. With all your support the Diocese of Nandyal is moving forward in rehabilitating and rebuilding the lives and communities. The progress made in the relief work so far is as follows.

We are grateful to all those who are responding with prayers and support. Our contact person for voluntary contributions is Rev.N.Isaac, The Treasurer, Diocese of Nandyal, Diocesan Office, Cathedral Road, Nandyal – 518 502, Kurnool District, A.P, South India.(Ph: 9949291215) (email: revnandam@yahoo.com)

A BRIEF REPORT ON THE FLOODS IN NANDYAL & KURNOOL DISTRICT

Under the influence of a low pressure in the Bay of Bengal heavy rains lashed Kurnool district on 2nd and 3rd October 2009. It caused revivers and stream to swell. The heavy rains in Karnataka and Maharashtra added to the woes of Andhra Pradesh. Srisailam and Nagarjunasagar dams received heavy inflow of waters. On first two days the inflow is more than the outflow of the dams. This resulted in heavy floods that have completely thrown normal life out of gear.

The Kurnool city was the worst affected by the floods in the state. Flood water reached even second floor and thousands of people were trapped in their own houses. The trapped people have to go without food, drinking water and electricity for about two days. Women, children and aged people are the worst affected. More than two hundred people took shelter in the recently constructed CSI Christ Church, Kurnool. The rescue teams of CASA have saved the lives of more than thirty people in Kurnool. Relief and rescue operations were in full swing in Kurnool under the leadership of our Vice President, Rev. Varaprasad.

Nandyal town is also very badly affected by the floods. The town is engulfed by the flood water of river Kundu. More than forty percent of the town was affected by the floods. People living in fourteen colonies were evacuated. Nandyal town is cut off from Kurnool because of overflowing river Kundu. Thousands of people became homeless overnight and are in relief camps eagerly waiting for the water to recede. The villages Jupadubangla, Pamulapadu, Pagidyala, Nehru Nagar, Santhajutur, Velugodu, Bandi Athmakru, Vempenta, Mitnala, Kundanala, Chapirevula, Danielpuram, Yerraguntla, Kakanuru, Narayanapuram, Bayatipeta, Tharigopula and Peddabodhanam were completely submerged along with hamlet of villages around them. In total nearly two hundred villages belonging to the diocese are affected by the floods. . More than two lakh people were affected because of the floods. More than twenty churches were completely washed out.

THE VITAL ROLE OF THE DIOCESE OF NANDYAL: IN RELIEF WORK:

Under the able leadership of the Bishop Rt.Rev.Dr.P.J.Lawrence an emergency meeting was called on the evening of the 2nd October to take stock of the flood situation. All the diocesan institutions, schools and hostels in Nandyal town were made into make shift relief camps to receive the flood victims. As the diocese has a good networking with the government and other NGO’s, the following relief measurers were taken up on war footing.

At present more than five thousand people were staying in the relief camps organized by the diocese. These people need and deserve more help in the coming days. Post flood situation requires lot of planning and hard work to bring back life to normalcy.

THE CHALLENGES BEFORE THE DIOCESE IN the POST FLOOD scenario.

I went to a meeting of the Nandyal steering group of headteachers yesterday. They were all very disturbed to hear about the floods particularly as they knew the places that were mentioned in the news reports from Bishop Lawrence.

They are sending a letter to all our heads to ask them to raise funds to help children and communities who have been affected and also to remember Nandyal in their assembly prayers.
They have asked me to immediately send £2000 from the funds that we keep for them- Chalfont St Peter's School has given an additional £500 to add to this.
We also have the possibility of getting some funding from BMS through Mark Craig.

Thank you all for your prayers and thoughts for the people of India. I feel very privileged to work in a Diocese where so much concern is shown for others across the world.

Thank you Bishop John for sending money from your outreach fund. I am really pleased that we can respond in such a positive way as I personally know how desperate it is for poor people in the area. Sometimes immersed in our worries here we can quickly forget the plight of people in very deprived areas like Nandyal. The Indian Government is helping a lot but it is good for the Diocese in Nandyal to know that we also care.

So everyone is getting stuck in, in various ways. Contact for direct aid is above. Tear Fund and Christian Aid are also involved. There will be longer term needs, of course, but I’m glad the ball has begun to roll in a better direction.

Thanks to all for your prayers and concern.
Posted by Bishop Alan Wilson