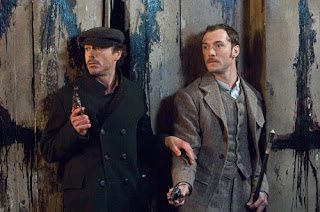 Crash, bang, wallop, what a picture! Guy Ritchie has transformed Dick van Dykes’ Hollywood London Town into a schlock horror Gotham City for his hyperactive Sherlock Holmes. Gone are the dancing chimneysweeps, to be replaced by low life slimy rodents, many of them human, and plastic bats. The walls glisten and the streets heave with shifty urchins and cheeky beggars. The weather is crap. That bit, at least, is profoundly authentic. 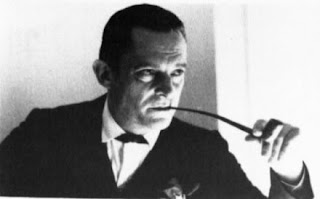 The Doyen of screen Sherlock Holmeses, so far, has been Jeremy Brett, who spent most of his time in a darkened room being feline and aloof, taxing his brain. This made it possible to believe he could actually deduce from the dirt under a girl’s fingernails that her stepfather was a Cavalry sergeant who had served in the Indian Mutiny, played the bassoon, and married his housemaid. 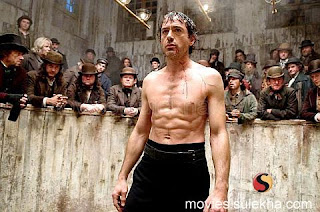 Robert Downey Jr’s Holmes is shallower, I fear — “less cocaine, more speed.” I ended up wishing he’d try Ritalin. When not tripping, this Great Detective comes over as a bit of a layabout. He must pop out to the gym on the quiet, for at least the occasional trip on nandrolone. I deduce this from his generally ripped appearance when, Ladies watch out, he removes his shirt for a spot of bare knuckle boxing. Even then, though, he’s so tripped out that his slow-mo Hong Kong click-click-click bits occur before they’ve actually happened. So, Sherlock Holmes is an 007 paced action romp, with direction that’s rather itchy and scratchy, annoying even at times, but, as they say in Newcastle, it gets yer there. 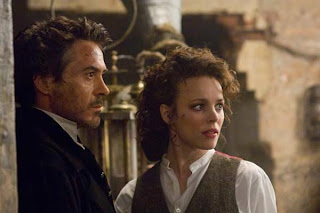 Universal Education means the criminal classes can now read. Pentonville Prison thus bears the legend “Pentonville Prison” in six foot high letters. The same bloke’s probably painted “Hangings Tonite” round the back in three foot letters, with a big sign on the chimney saying “This Way Up,” for really thick crooks. The general effect of all this public signage is rather Mel Brooks. Frankly, if I were Professor Moriarty, greatest criminal mind of my generation, I’d feel slightly patronised. I’d do something really dastardly, like going to the London Hospital for War Heroes (labelled “London Hospital for War Heroes”) and turning the last “o” into a “p.” But I digress. 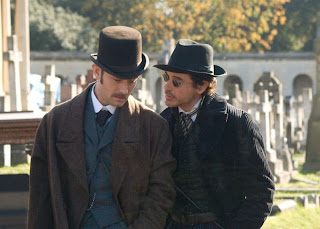 Tower Bridge is a-building and all London’s aghast at the sadistic antics of Lord Blackwood, who indulges in “I don’t expect you to talk, Mr Bond: I expect you to die” fun with bandsaws in a Porky Scratchings factory in Southwark. He maintains a shedload of Black Magic gear, and what Arlo Guthrie used to call Implements of Destruction, in a creepy crypt underneath Parliament. Blackwood has gathered a band of prominent baddies, à la Da Vinci Code, and, guess what, for their next trick they are planning to take over the world. This is especially spooky because back at the beginning of the first reel Lord B was actuallly hanged at Pentonville (in a hanging shed labelled “Hanging Shed”) and certified dead, by Dr Watson, no less. 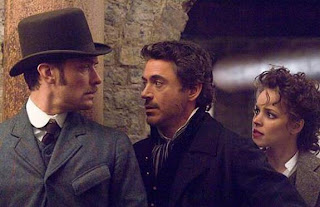 In spite of a faintly Hammer film ambiance, this film is all good fun, and pacy enough to keep most people awake, if not on the edge of their seats. What’s not to like? Well, the CGI is superb, and although I don’t think Downey will redefine the character, Holmes himself is just believable. Rachel McAdams pouts and puzzles her way through over two hours as a sultry action heroine. Unfortunately I’m not sure anyone, her included, has quite worked out what she’s doing there, or indeed, whether she’s a goodie or baddie. Bit of both, really. Anyway the movie ends (without giving everything away) with the most blatant pitch for a second series since Alan Partridge went for a BBC lunch, so we may yet discover new depths in the character on her next outing. Seven out of Ten.

Have not seen the movie yet, but as a long time Holmes fan (I bought a deerslayer hat when I was twelve), I look forward to it! Don't know where you find the time to write such good stuff!

Bishop Alan, only 69% of the critics in the US give Sherlock Holmes a positive rating. I haven't seen the movie yet, but it seems that if one attends without expecting to find the Holmes character that we all know and love, then the viewing might be an enjoyable experience.

Thanks for your take on the film.

I've never left a comment, and rarely I comment on other blogs but I read you everyday, and often more than once a day.

I support you on this and I'll try to leave few words here and there.
anti keylogger