Out of Africa: Toxic Prawn Cocktail 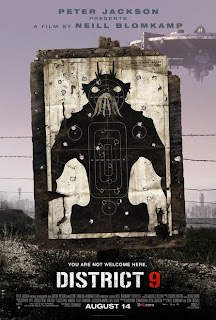 Neill Blomkamp’s District 9, now available on DVD, is original, thought provoking, and unforgettable, even for non sci-fi wonks. Movie Aliens have clasically taken various ingenious forms — killer tomatoes, fifty foot women, even a bloke in a gorilla suit with a diving helmet. Since Close Encounters of the Third Kind, however, most regular aliens have had smooth ectoplasmic bodies and almond eyes. Men In Black introduced a telling variation — jumbo cockroaches, with feelers, manners and mores to match. 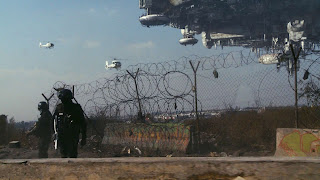 Here’s an easy one for your next pub quiz: What country does Wikus van der Merwe come from? Answer: Wikus and his lovely blonde wife come from the right end of the spectrum of the Rainbow Nation. Wikus isn’t embarrassingly bright, but he is married to the daughter of his boss, a Pik Botha lookalike bald meany. Wikus he has been given a big job by his employer, a government agency called MNU, to clear prawns from District 9. 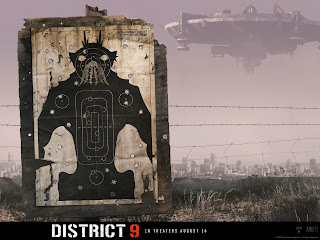 But I’m running ahead of myself. A bunch of aliens has landed. It’s come, obviously, from a galaxy far far away — they always do. Their ship is all smooth white metal, neat pipes and designer bumps on the outside, but on the inside it’s worse than a teenager’s bedroom — literally indescribable, so I won’t try. The ship may have broken down, or perhaps not. The aliens themselves are slightly mellowed Men in Black insectoid.

They came to Johannesburg, but Johannesburg received them not. Or rather, Johannesburg received them in its own inimitable way, by piling them behind a concrete wall into a shanty town called District 9, for a bit of separate development. That don’t seem particularly friendly, but on the plus side, the locals have christened their uninvited guests “Prawns.” I could watch this film all day for the sheer pleasure of hearing the word pronounced in fullest rolling Afrikaans. “Prawns.” Say it loud and a brass band’s playing. Say it soft and it’s almost like braying... 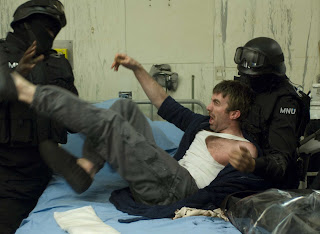 District 9 contains all kinds of people you wouldn’t want your daughter to date, from Wikus’ dim freebooting mercenaries to a bunch of unpleasant Nigerians who do various nasty, occasionally violent, scams involving raw meat. When not otherwise employed, we assume they send out emails al over the world telling people they’ve won a million dollars. 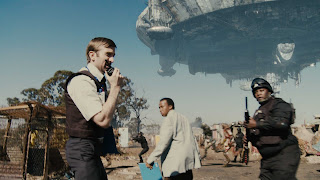 The Prawns have outstayed their welcome, and the government has built them a lovely new concentration camp up country. Unfortunately, the little Blighters don’t know a good thing when they see it, and Wikus is the man to win them, and their wives and kiddies, over. Soon disturbing evidence begins to emerge that they have been cooking up a few little surprises of their own. 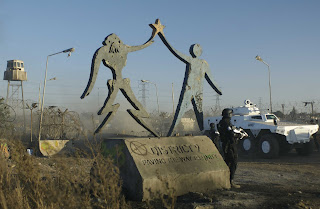 A sharp script and taut handling prevents the transitions from action flick to mockumentary clunking, and good humoured gags abound throughout. Some more humourless Nigerians will not find them all funny, but this is an outstanding film, with a significant message to ponder about how people handle difference. District 9 proves it is possible to make a first class movie for only 30 million dollars, and get it all back on your opening weekend in the US. Perhaps the film industry has a future, after all. I’m giving it nine and a half out of ten.

I'm glad you enjoyed it. It's one of the best South African films ever, I think. And one of the things we find annoying is that some films on South African theme's, like Cry the beloved country and that rubgy one onsist on using foreign actors to portray South Africans.

One of the things we were wondering were how many people in other countries would get some of the local cultural references -- there's something about that in my review of it at District 9 — science fiction as social satire: Khanya. Were there things you found inexplicable because they were too culturally alien?

Thanks, Steve for your review, which brought D9 alive for me again.

Lucy and I have got a couple of airline tickets aywhere int he world, and have decided to have a week in Capetown in a fortnight's time (if not prevented by the current UK Ice Age), so I'm looking forward to going to SA for the first time as a visitor soon.

I found D9 wonderful, as did our 14 year old sons... it had something for everyone. I'm sure there are lots of local references we didn't get (shades of old Rumsfeld's unknown unknowns) but enough there to make it a real world class bit of Cinema — Definitely one of the top two or threee of 09.

I hope you enjoy your stay in Cape Town... sorry we won't get a chance to meet you here for a beer or something.