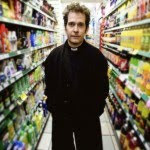 Adam Smallbone, the new BBC Rev., is engaging, with real spiritual depth. At last the BBC has moved beyond The Vicar of Dibley. She engaged millions with woolly jumpers and chocolate silliness, with a good humoured take on life, the Universe and everything. Rev. is engaging in a very different way, much closer to where many urban vicars are, in fact.
People talk of the Church of England as an institution, forgetting it isn’t anything of the sort — just a ragbag of around 20,000 trusts and bodies, loosely aligned, that has evolved over the past 1600 years. Its ties bind in all kinds of intriguing elasticated ways. Describing life in such a place is no light task. 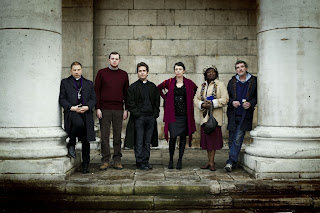 It’s easy for any outsider to critique the detail of any TV depiction of anything. Years ago the BBC broadcast Sergeant Musgrave’s Dance. Next Day a retired military gentleman complained that “the Buffs in fact had seven buttons down their tunics not nine as portrayed by the BBC last night.” As any ful kno. This kind of complaint is rarely as clever as it seems to the person who makes it. We all know that few Archdeacons cruise round London in Taxis wearing Gestapo surplus leather gloves, but that’s not the point. The point is that’s how it feels. 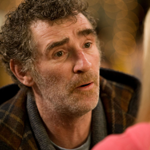 On a personal and emotional level, Rev: is remarkably sure-footed. It brings back vividly for me memories of ten years’ urban ministry — trying to be a Christian and pray, feeling rather bemused often, filling the diary, trying to love people in the face of my own inadequacy, the size of the task, and the vagaries of human nature. Rev: has a clutch of improbable vicarage characters I could match almost name for name, as, I suspect, could anyone who’s ever been an urban vicar for any reasonable length of time.

For all its tendency to self-parody and caricature, I like Rev. It’s a noble enterprise. Those who wrote it know whereof they speak. Adam sits in his Church trying to pray the office, wishing God would bloody do something, but secretly suspecting he won’t until his unworthy servant has made it through the next funeral. It’s a ministry that resents all the distractions, until it realises that the ministry is the distractions. 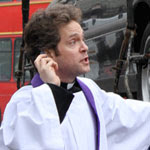 There’s holiness in the unglamorous, haphazard, but profoundly kind and patient way C of E vicars do urban ministry, even in some of the crazier characters vicars encounter. It’s highly implicit, always understated, rarely obvious. Light very occasionally streams in serendipitously, but the grind is always there. You just have to pray for people, and try to help them make the best of themselves, and never give up.

There is, actually, courage, resilience, faith and even holiness wrapped up far more than thousands of urban vicars will ever know in their ministries. It deserves more understanding and respect than it sometimes gets, and this show does acknowledge its reality and worth. For all Rev:’s occasional TV simplification, full marks to writers, cast and crew for trying to capture it, and occasionally succeeding.

PS: I studied in Shoreditch thirty years ago. St Leonard’s was an amazing place, and it’s good of the telly people to give the old dump its own TV show.
Posted by Bishop Alan Wilson

Very well said and I for one completely agree!

Rev deals with the grimier parts of urban mininstry with understanding and sensitivity.

I am reminded of an incident about 16 years ago when my Dad was incumbent of a church in West Reading. After Midnight Mass one year the congregation alerted Dad to a prone lifeless looking figure slumped against the church hall. Dad went over to him, and the poor bloke came to with a start to see a clergy man in full gold vestment, chasuble and all bending over him, I bet he wondered whether he had gone to 'the other place'.

As you say, it is alarming how even a newbie Curate such as I can name names that match each of the skillfully observed characters. It is alarming, it is uncanny.

It was also a joy to be sat in a room with a whole peer group of a diocese's curates one evening as we all watched. For my part though, I am glad it wasn't the 'Isn't Jesus Awesome' one! Smoothie anyone?

As an urban priest, suddenly I feel mainstream. I am even married to a solicitor Mrs Vicarage who doesn't 'do' vicar wife stuff so much, so that keeps 'Er Indoors' happy too.

Alas, we can't watch this in the US - the iBBC player won't show the video, although we can get the audio. I shall put the DVD season on my Christmas list - it sounds like a treat.

Can hardly wait for this one to "cross the pond"....

Amen! That is the prayer... those things where we have to show God's love.

I watch the Rev and Shoreditch Church with a touch of Nostalgia. It is my home ground, where my family hadlived for generations (back to about 1642) until my generation left for the suburbs after the blitz and post-war dispersal that took place in East London. I left to join the Army in 1967 and never went back. Although I travel through it regularly driving to events in London.

I was RC at that time, so Shoreditch Church and its congregation were perceived as the enemy (virtually pagan according to my father?). Fortunately, I came to my senses and joined the CofE.

I think that the Rev gives an insight into things that I will not experience in my leafy suburb, in the same intensity. But while I test a vocation - it is also a reality check on what can happen to those who minister to us.

Do I really want to be doing this? Well the answer is I don't but something bigger than I am seems to have other ideas.

I blame my Vicar - he should have put me off - but he didn't and look where it has got me.

A good & fair review; I cannot comment on whether it is a fair reflection of Anglican inner-city ministry but it is funny, challenging, wise & seems to have a heart - a blend that seems absent from most TV comedy today.

I love Rev. I think it is so intelligently done. It also makes me laugh out loud, and most comedies don't. I love the Archdeacon and his scary leather gloves and strange stare. He's not overplayed though - you mostly twig how sinister he is through Tom Hollander's petrified reactions.

In the most recent episode I really liked the contrast between the way the "successful" clergyman (played by Hugh Bonneville) shamelessly stole something from Adam (his idea for a radio slot), whereas hopeless old Colin, who sleeps rough and is a bit of an embarrassment and an official "failure" in life, did the reverse - he went and got something that had been stolen from Adam back (his church robes), and got his face bruised in the process, but he didn't care about that.

I also liked the breakout quote on the page of a newspaper article that the Hugh Bonneville character had supposedly written - "We are all chained to the radiator of life." This was suitably meaningless in just the right way. They only showed it for a second.