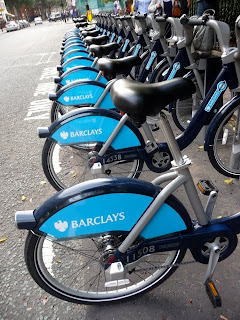 Time to take the plunge and try the new Cycle Hire Scheme for London. Ken’s Koncept, but the Bikes are Boris’ if not Barclays Bank’s.
Yesterday I had a meeting at Lambeth and half an hour to get there from Marylebone Station. According to the Transport for London calculator it should take 27 minutes to cycle the route. I had nothing to lose but my chains. Lose one of mine, and gain one of Boris’ Cycle Chains... 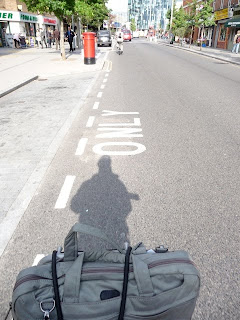 Well, my first 27 minute journey took 33 minutes, but mainly because I took a couple of wrong turns and had to hoof my bike down some steps near Carlton House Terrace. I'm glad my dear mama brought us up to know our way round London, because you do have to have some idea of where you're going. You can generally use bus lanes, and even car lanes, and when desperate can pick up thy bike and walk. This is slightly weird, but it works as long as you have some idea of your way round London. If you have no idea where you are tryinug to go, you have a problem — but there's only one way to learn. 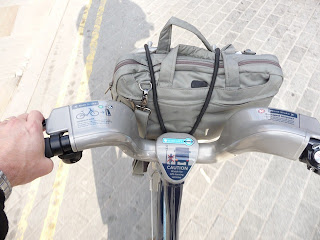 It was so much fun that I happily dropped off my bike and, after my meeting, went off to Tate Modern, which is not easily accessible by tube. I then picked up my third bike of the day, and headed back to Marylebone — another half hour trip up Fleet Street and through Covent Garden. With a stand every 600 feet across the centre of London you will usually be closer to your destination than bus or tube would have got you, and finding the last place you wanted taken on the stand is no more annoying than just missing the tube would have been.

On a slightly muggy day, with a coat on because it looked like rain, furious pedaling does slightly raise the heartbeat in good and bad ways. It’s all very invigorating, but if Ladies glow, bishops sweat like pigs. If in doubt, take your coat off and stow it. You certainly get around at a similar speed to other forms of transport, and probably faster than you would be car. London is not an especially cycle-friendly city (yet...?), and there are occasions on every London cycle ride when you need balls of steel (or female equivalent) if you don't want to end up as a high class hedgehog on the tarmac. Those who hesitate are lost. 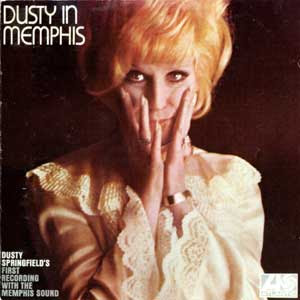 Confession. I didn’t wear a helmet. I just didn’t have one in my laptop bag. But soft! The CTC reports research by Dr Ian Walker of the University of Bath. Apparently, motorists give cyclists more room when they don’t wear a helmet than when they do. They give the widest berth of all to cyclists wearing big blonde wigs. So perhaps I should carry, not a helmet, but a Big Dusty Springfield Wig. That said, there are other reasons to steer well clear of a bearded fifty-something man wearing someone else’s Big Hair, even if he is not riding a bike. I don’t know. The jury’s out on that one.

But I digress. With no cycle clips, I tucked my trousers into my socks. You would need a substantial rain cape on some days — for various reasons holding an umbrella off the front of the bike is unlikely to be a winner.
Snow will pose more serious particular challenges, but all forms of transport experience difficuty when it snows. It wouldn't be British to have a fully functional system on snow days.

The whole régime around charging and paying is good in parts, and could be superb once it’s fully up and running. Registering on the internet was easy. Activating my key was glitchy because after ten minutes of listening to music and selecting items off a seven item menu, whilst being reassured my call was important, the operator the other end still failed to work the magic he promised to work for me. As a result all I got was a red light when I tried to use it. I phoned the number at the stand, and they got me going, but again, after ten minutes of listening to Miles Davis etc. etc. The second time round, it worked. So I learn, if in doubt, phone them up. It's also a good idea to set your preferences to automatically deduct access charges, so you don’t have to go on the internet between trips.

The bikes themselves are rugged and pleasing to drive. The 3 gears are basic but rugged. The storage for a laptop bag is excellent. It’s rather jolly zipping up between columns of traffic dodging wing mirrors. Health benefits are obvious, but with two major caveats that could be particularly upsetting to anyone with paranoid tendencies
I came away from a sunny day feeling surprisingly positive about the whole expirience. There are doubtless developments to come which will further refine the service, but it's perfectly usable, and reasonable fun. Would I do it again? You bet.
Posted by Bishop Alan Wilson

Where would you store your coat and a little bit of shopping even if it's only your lunch or an A-Z?

Interesting question, Erika. I got a laptop bag as per the photos into the sturdy rack on the front, which holds things in with the big elastic arrangement you may be able to see. I think a bag that was about a third wider and half as big again would have gone in there. It wouldn't manage a suitcase, and I don't know how wearing a small backpack would work from a safety point of view. The bikes will take a standard kind of business case, especially a soft one, but it will hold considerably more shopping from Cartiers jewellers than Tesco's Extra...

I don't see any problem wearing a small backpack from a safety point of view. I wore one for several yearws when I rode a bike to work and when I was at theological college. Anything up to 20-25 litres should be no problem, though it does depend a little on how upright you sit on the bike.

I would so love to take up cycling round London but I just can't ride a bike very well and even though you can get training for it these days, I drive around London and I know how the traffic behaves, and I'm just not sure I'm willing to submit myself to the tender mercies of double decker buses, van drivers and young blokes going hell for leather trying to get ahead of everyone else. I have tried walking round London for my health instead, but pick the wrong route and you tend to end up feeling as if you're on 60 a day doing that as well. It's tricky.