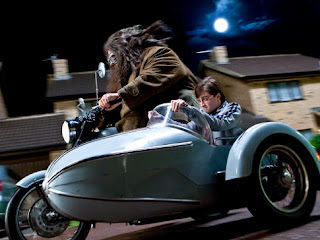 Potter world is now going to hell in a handcart. It really is. The benign old buffers who used to scoff custard creams in the Ministry of Magic have lost it, and Dumbledore’s body lies a mould’ring in the grave — actually it doesn’t moulder, it kinda glows, obviously. Things are falling apart, the centre cannot hold. On the streets there's a purge of mudbloods. The Dark Mark fills the horizon, Black wispy Satanic candyfloss on speed zaps through darkened skies. It smokes like the rear end of my Morris 1100 used to when the big ends were going. Death Eaters loiter around the mouth of the Dartford Tunnel splatting owls. 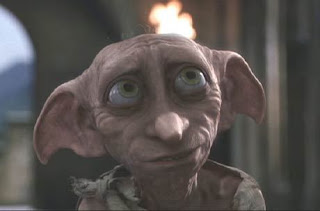 Through the pallid dystopia created by Lord Voldemort and his dark chums trek Harry, Hermione and Ron like hobbits who wandered onto the wrong set. They camp out in a wee Canvas tent like my old dad had in the scouts, seeking Horcruxes to zap. That’s pretty much it, apart from assorted bangs and whistles, a few snakes snapping away like angry crocs, and a hooligan gang modeled on Adam and the ants. Dobby the House Elf provides the only emotional relief, blasted at the end. 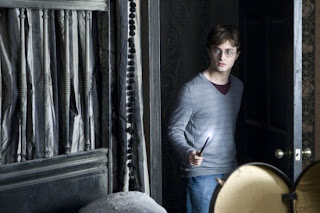 I doubt that this particular movie will turn out to be many people’s Pick of the Potters. Not quite enough happens, and as the characters age, the school adventure fun has gone. The plot is all characterisation, setting up the characters for the final showdown. It’s really only starters for a main course to be served up next year — Deathly Hallows part 2. 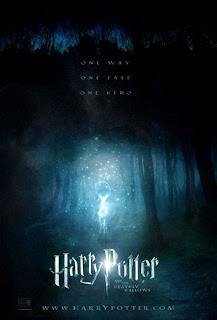 It may be the final countdown, but that’s only a warm-up act for a rumble in the jungle that will make Armageddon look like a Sunday School outing. The elderly should bring earplugs. The young should clutch transitional objects and therapy buddies. Everyone, pack spare underwear. Forget Ali/ Frazier — this is Potter/ Voldemort, and the Dark Lord is already mooching around, his slitty little nose twitching at the smell of blood... Harry Potter is coming of age. And not just Harry. The New York Daily News tells us, in the real world, that Emma Watson kisses like an animal. “What kind of animal?” we may wonder, indiscreetly. An Anteater? A Slow Loris? a Manatee? Watch this space. 4 stars out of 5.
Posted by Bishop Alan Wilson

Personally I loved it - it's the best Potter film since PoA, and I thought the animated fairy-tale sequence was inspired.

Dumbledore's body was apparently incorrupt - S. Albus of Hogwarts, anyone?

Our newspaper reviewer gave the latest Potter film 3 1/2 stars of 4, calling it "the best of the franchise to date". You've dampened my enthusiasm a bit, Bishop Alan, but not to worry. I'd rather see a movie under-expecting and be pleasantly surprised, rather than over-expecting and come away disappointed. I'll get back to you once we've seen the movie.

Finally trudged up to the Detroit (a 75-year old movie house cut in half longitudinally, complete with a near non-existant heat and peeling wallpaper) to see it. With hands wrapped in my John's scarf it did keep me spellbound for a good 2 1/4 hours. The action sequences are breathtaking and the character development between the three leads is very poignant.

What differs from the past films is twofold: Firstly, it's about the truest to the book and by splitting the book in half the pace of dialogue is slower, especially for He who must not be named, no longer flitting about a cauldron and throwing his lines a mile a minute.

One scene dear to my heart was left out, the 'memorial' that only wizards and witches could see at Goderic's Hallow. That could have been a calming moment after the snake encounter at Bagshot's house.

I saw the latest Potter film under-expecting, but I still came away disappointed. I was lost, because I had missed 4 movies in between the first two and "Deathly Hallows", and I'd read only the first book.

To me, a movie should stand on its own, unless the filmmakers advertise in the trailer that one should not spend one's money unless one has seen all the movies or read all the books.

I remember the first movie as somewhat dark, with terrific special effects and a lot of fun. The second movie was not so enjoyable nor as much fun, which is the reason I skipped the next 4 films.

I'd give the movie a 2 out of 5. May the wrath of true-blue Potter fans not come upon me!