Presuming to Criticise the Great Oz 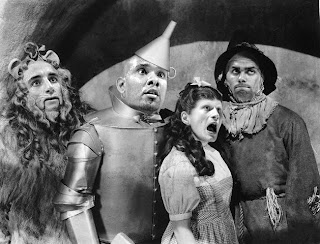 Is he a very bad man, or just a good man who's been a very bad wizard? MP's added a session to their schedules to hail the morrow, as after travelling all the way from, er, Oz, Rupert Murdoch, who does not instinctively do humility, announced that Tuesday was the most “humble” day of his life. A new message is coming through loud and clear — “Pay no attention to the man behind the curtain.” This and the truth of Corporal Jones‘ immortal observation “They don’t mind dishin’ it out, but they don’t like it up the rear.” 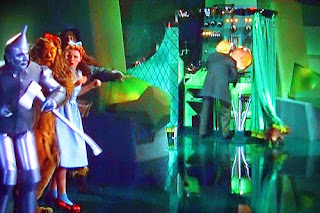 This is a critical turning point for everyone. For years we have all believed in a monolithic puissant Behemoth called “The Media.” The power that drove its steely flanks was terrible and swift, and derived from owning the means of production — Scott's old joke about a free press in England, as long as you happen to own a press. Now we all own a press, and carry it around in our pockets, and if we don’t like Mr Murdoch and his works he may not listen, but he can't prevent us expressing ourselves, or manipulate the stories we tell without us being able to do anything about it. His value came from a monopoly on the means of production, and that monopoly is busted.

The digital reformation that drives this change has been afoot for a long time. Ironically the Murdoch Bunker in Wapping is a concrete monument to its first wave, when, three decades ago, he rode into town on the tail of Eddie Shah and cleared out old Fleet Street of its quaint Spanish Practices. Now his empire is as obsolete as the older order it displaced. Mr Murdoch has even more humble days to come, no doubt.

As dramatic and iconic as the NI tale may be, don’t let's obsess on Mr Murdoch. For a start, as Rebekah Brooks hinted darkly on Tuesday, the word on the street was that other titles have behaved equally, if not more, unethically than the News of the World. Her attempt to suggest the Home of Dity Tricks was the Observer hardly stacked up, when everybody knows the Daily Mail has led the ruthless pack. The principle holds, however, that the scope of this deflation is far broader than just NI.

So what wll the news title of the future look like, and how will hacks make a living? I suggest, ont heir wit, like they always did. Human beings have an insatiable appetite for words and information — they just don't want it controlled by unaccountable Big Beasts. The market will segment into a variety of models, of which the Huffington Post and Financial Times seem to represent two. HP draws in writing talent from wherever and aggregates it, whilst the FT contains information that’s actually worth the money for its (specialised) audience.

What of the Murdoch staff? They have various dates down the station, whilst the politicians gyrate to dodge the bullets flying around this story. There is a global dimension, of course, given the 9/11 hacks if for no other reason. There is the question of compensation to 9,000 victims who may not feel as obliging and negotable as the first handful did when Rebekah Brooks paid them off, thinking, she says, they were the only ones.

As to the Dinosaur press, I have a Times sub, but if I'm honest must confess I seldom bother to download it any more. It's a reasonable production and I can look back to half a dozen articles this year I have much valued but frankly I find the whining editorial tone, the monochrome thinking and narrow selectivity of narratives the paper brings to every issue boring, lifeless and mediochre. I wade through a load of padding to get to a few nuggets of gold, when my browser would find me stuff I actually wanted to read in a fraction of the time, free to boot. So I keep the subscription going out of a blend of guilt and optimism, but my heart's not in it.

You may say that I’m a dreamer but I’m not the only one. The future will be different, and I for one will not miss the former contents of the crumpled and deflated green robes over in the corner.
Posted by Bishop Alan Wilson

If charged with having an obsessive-compulsive disorder regarding newspapers, I would have to plead guilty. That said, I am of the view that some do carry thoughtful articles.

One such was in Harry Eyres' column ("The Slow Lane") in yesterday's FT (30/31 July 2011). Entitled "Second that emotion" it contrasted the responses of Prime Minister David Cameron and his Norwegian opposite number Jens Stoltenberg to the horrific events in Oslo and Utoya island. Cameron emphasised his "outrage". Eyres comments that:

In the coverage from Norway and interviews with those who had witnessed the attacks and people in the street I heard no one expressing “outrage” or any similar emotion, or the desire to hit back against evil. What was so moving was the restraint and dignity and solidarity of the Norwegian people, gathered in communal expression of grief."

Eyres goes on to comment that "the right words, connected to properly differentiated feelings matter enormously at all times".

I agree that the FT "contains information that’s actually worth the money for its (specialised) audience". But as someone with no interest in or understanding of technical financial matters I reckon the quality of that paper's analysis of a range of public policy issues is excellent. I don't associate it with expressing contempt for individuals or perspectives, something I find very refreshing.

What a very thought-provoking blog post. You make some extremely valid points that, I'm ashamed to admit, hadn't occurred to me. Thank you for giving me more to think about when it comes to the "man behind the curtain"—it's a sad truth about the media, and I hope that it leads to change in the future.