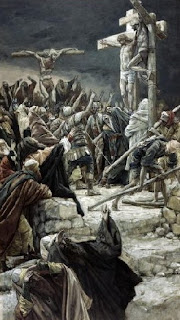 God's word is the hammer that shatters rocks in pieces, even or perhaps especially on the tenth anniversary of 9/11. This Sunday many of my colleagues may have been sucking their pencils and feeling blank, but some of them will preach the sermon of their lives. By “sheer coincidence” the Lectionary serves up readings today about forgiveness.

Romans 14 is about the handling of profound conscientious difference that produce strong mutual antagonism among Christians— something they experienced in the first century, too:

we will all stand before the judgment seat of God... then, each of us will be accountable to God. Let us therefore no longer pass judgment on one another, but resolve instead never to put a stumbling block or hindrance in the way of another. I know and am persuaded in the Lord Jesus that nothing is unclean in itself; but it is unclean for anyone who thinks it unclean...


This approach has not generally been taken by the top brass of the Anglican Communion in the last ten years. Their occasional eschewings of judgment have ministered grace, but their fondest strategies for dodging the embarrassment of sexuality issues, or devising an ingenious lawyer’s band aid, have simply backfired and compounded the hurt. Go figure. Romans 14 really is the only way. Sooner rather than later, I hope.

And then Matthew 18, the Gospel of our Lord Jesus Christ, who uncompromisingly told his followers to love their enemies, kicks in, straight to the solar plexus


Peter came and said to him, "Lord, if another member of the church sins against me, how often should I forgive? As many as seven times?" Jesus said to him, "Not seven times, but, I tell you, seventy-seven times.

Jesus goes on to tell the story of the unforgiving servant, that exposes the complete idiocy of our wraths and sorrows. How do we love our enemies, though?

Here in Great Missenden, Rosie the Vicar explored with tremendous clarity what forgiveness is and isn’t. The thief hanging on the cross was unquestionably guilty, and Jesus unquestionably innocent. Their interaction is outrageously simple.

This made me reflect that if we try to forgive out of our own supposed resources of niceness, we will only compound the anger and hurt. All we can work out of, fruitfully, is our own receiving of forgiveness, love as strong as death, love with open eyes.

Her sermon went on to say true forgiveness is the hardest thing in the world. It is NOT
It is a personal transaction that releases the one offended against from the offence. That’s all.

She went on to quote the Roman Catholic psychiatrist Dr Jack Dominian, one of the Church’s greatest and wisest teachers about the reality of being human. He was talking here about marriage breakdown:

Forgiveness is not enough. We need to go beyond forgiveness and do as Christ did, who knew what it was to be man. We must try to understand what lies behind the act of aggression. One set of reasons is that the aggressor himself is hurt, insecure, vulnerable, bored, tired, depressed, confused, under stress and is seeking help through aggression. If that is the case, it is not good enough to forgive. We have to do something about remedying the cause of the aggression.

Even more important, the cause may be ourselves. There is nothing more hypocritical in Christian life than to forgive the aggressor with magnanimity when in fact we are responsible for his aggression.

She went on to say

I wondered, leaving Church, whether the same skill of costly forgiveness that Jesus commanded his followers to exercise an infinite number of times when they fell out, the grace to let go, is not also necessary if we are to be released from idols, especially those we have inherited from the past, and so become what God is calling us to be as we embrace his future.
Posted by Bishop Alan Wilson

Our Curate preaching this morning reminded us about the completeness of forgiveness. Giving the example of Terry Waite, who had forgiven his captors but felt his forgiveness was incomplete as they had not shown or expressed any remorse for their actions.

This is something I will be writing on as it is such an emotive topic for me.

I've been there in a marriage breakdown. I've felt myself the victim and lost my faith as one outcome. I can now clearly see that somewhere I had missed my own part in that breakdown and had never acknowledged the incompleteness of forgiveness required. Lots more of currents running there to reflect on.

Coming back to 9/11, I can remember watching in horror and disbelief as it happened on a TV in my office. I knew something had changed in the world that day. David Cloake on his blog expressed it as "the world turned in a different way that day" and how the enormity of what was happening was "like a Arnie Shwarzenager movie", until the reality hit home.

My prayers today are for forgiveness and reconciliation between all peoples, that we might live in justice, peace and harmony - sharing the worlds resources fairly and for the Kingdom to be here and now.

Excellent post,you always give me much food for thought! Your words are most appropriate at this time.

It would seem that this evening is my time to be moved to tears by the inspirational words of others. First, those of two young girls, Bushra and Serjuntae, on Songs of Praise and now your blog. Thank-you!

What a wonderful sermon, I wish I had been able to hear it. Can we persuade Rosie to publish it in full?

I think one of the deepest problems we have with forgiveness is that we always think it is conditional.
I cannot count the number of times people have thrown the story of the woman taken in adultery at me, because "go and sin no more" is the strongest proof that the judgment was right, that those judging are morally superior to those being judged, and that, yes, we magnanimously forgive your worst sins, provided you stop doing them and follow our moral code - NOW. Because, clearly, that's how Jesus forgave too.

I remember a conversation where I mentioned the man hanging on the cross next to Jesus only to be told that he would clearly not have any further opportunity to sin and that we must assume that, having understood who Jesus was, he would henceforth have lived a moral life had he lived.

How do we move on from that?

Thanks all. Erika. I agree strongly. Often we glimpse what forgiveness is, then recoil from its outageous simplicity. I've found Robert Farrar Capon to be a reliable guide to the phenomenon...