Mimi the Dead Cat. She Being Dead yet Speaketh. 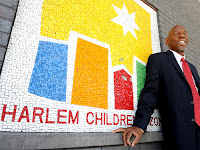 Academies are all the rage in England. It all began with visits by UK politicians to Charter Schools in the US, especially KIPP and the Harlem Children's Zone. Here were transformational inner city projects that helped the poorest achieve great things. They were also non-unionised, and non selective — indeed most energy was focussed on those with the greatest obstacles to learning. Almost 12,000 children's lives are impacted by HCZ, with an almost 100% graduation rate. What’s not to like?

Very little; indeed after spending a day in NY with HCZ, I’d love to see something similar in the UK. The current government-driven academies programme is a less than flattering imitation of the original.
Many in the UK mouth platitudes about improving education, but if they don’t actually believe in equality, the class system wins every time. Without the motive to engage in the way HCZ does, all our politicians are able to do is clip out bits of the Charter Schools programme that sound as though they might be appealing back home. Concept without values is meaningless. The result is a government that blunders around aping something from the US it doesn’t really understand, and wouldn't actually want if it did.

They say history begins as tragedy and ends as farce. Comparing the UK government driven approach to HCZ, I was reminded of Mimi the Persian Cat. Alive she was quite a looker. Stuffed by a semi-competent taxidermist, she lost her charms...
Don’t our children deserve better than this?

I'd forgotten this clip - wonderful stuff!!

What I don't quite understand is why we cannot implement this in Britain. It fits the current ideas of improving education, access to education, improving behaviour, improving parenting skills, getting private finance to do it, and it fits with the Government's Big Society.

Good question: A hand list of possible answers include Obsession about Class, Inertia, political desire for control and the quick fix, centralism, the way budgets are kept so that holistic (cross agency) work is almost impossible to fund, elitism. Something like that. It's very sad.

But the obsession about class has shown us precisely that we need an educated working class to compete in a service based economy, that having whole estates largely on benefits is more costly than education would be (especially if it's privately financed), and that we need to be seen to do something.

Political desire for control is already relinquished to the academies.

Cost centre accounting is definitely a factor that hampers a lot of joined up thinking and long term planning. But I keep coming back to this being largely privately financed... it ticks all the boxes for a conservative government....or should do.

Charter schools and academies are a mixed bag here in the US. Some perform quite well, even as others do worse than even bad public schools (not like your Etons and Harrows, but rather state-supported schools). It seems to me that when the goal of the school is equality, then the by-product is often excellence. What's to quarrel with? The truth is that in our supposed classless society, there is no demand for equality from those with influence. What! My kids in school with that rabble?

But we also find that, the very rich apart, most families paying for private education are very happy to stop doing so and to send their children to the local secondary school when it provides good education.

Our own small sixth form of 80 students in a year has succeeded in getting 2 to Oxbridge and several more into other top universities this year, a neighbouring 6th form of about 200 students in a year has 6 students taking up places in Oxbridge this autumn.
While there are many private schools in the area, our secondaries are excellent and full of people from all social backgrounds.

Apart from those who have inherited all their wealth and status, the majority of people seem to be meritocratically minded and not at all prejudiced against conventional schools.

It's different in parts of the countries where secondaries are not as good and parents feel they have no option but to scrimp and save to give their children a private education.