I  spend the morning of Good Friday, when possible, listening to the St John Passion. This year a particular theme stood out of the narrative: Unity — something bishops are supposed to represent, and something Anglicans have been mortgaging the farm to try and create. Today’s narrative seems to contain three concepts of Unity 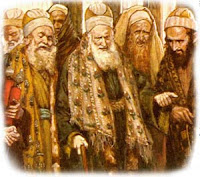 So bishops who  want to focus real unity will not settle for patched up falsehood — the totemic unity pushed by the Sanhedrin or the  political balancing act of Herod and Pilate. Real unity grows in people's hearts, as they recognise a bigger source of spiritual unity as the gift of God and live out the implications, however hard it may be to do so. Real unity comes when people see they belong to others because God accepts all his children so it is foolish to play off one against another. Real unity cannot be engineered by pretending but begins with union that accepts loss and despair.

You cannot create unity that is worth anything by appealing to it as a general principle, or by religious or political manipulation. True unity is the gift of God — love with open eyes.

Much needed for a Good Friday that falls in a season thick with the church's self-deception. The phrase "God accepts all his children so it is foolish to play off one against another" should be on the lips of anyone willing to pit brother against brother for just about any expediency when the Gospel is a fundamentally inconvenient calling.

For various reasons I have been engaging with how to pray in the world of the covenant and with the legislation about women bishops in the wings. And this Holy Week came to mind "Lord, break us more, that we may be more united". I am not sure it is wholly orthodox, but in the face of the cross, the idea that brokenness is to be wholly despised (Isaiah 53 anyone) - or that a broken body is a wholly abandoned body - dissolves theologically. Only a broken body can carry the hope of resurrection.

This has been staring us in the face for the past 10 or 20 years. We need to be broken to start again.

The bits that are not redeemable, are things like the House of Bishops, The Diocesan Structure, General Synod and the Civil Service employed in places like Lambeth Palace and Church House.

If we want to re-imagine Ministry, we need to re-imagine what Church is for, what Jesus calls us to be and not what we have created over centuries of tradition and sometimes uncomfortable agreements, which is what the Anglican Covenant would have been.

While we are at it, we need to re-imagine the Anglican Communion back to what I believe it was intended to be - a network of churches, working together to spread the Good news, not to centralise and control. Mission at its essence would be a good start.

Thank you for this. It has always seemed to me that in the great prayer for unity in John's gospel the crucial phrase is "as you and I are one". A unity here that is totally transparent ....and that is a grace from God. The unity of Christians is, I believe, a gift given to the church when it/we are trying to follow the way of Christ - which may well be a way of brokenness - and when we are true to ourselves and recognise the integrity of the other - including when we differ. (NB this is nothing like the oxymoron of a church of "2 integrities") This uinty is not a means to an end ; it is a gift, and to confuse the gift that is given by God with the end we are searching for, seems to be dangerous. If we put Christ and Christ's love first in our dealings with each other then we shall be a long way down a road to unity (because we won't be bothering about structures, but relationships). if we aim for unity first then everything else gets lost and sacrificed (sic) for this spurious goal

How can anyone put broken bread back together? We can't ourselves - but if we recognise outselves and others as Christ's broken body then we can be held together by Christ. Surely, this is the new covenant for the "forgiveness of sins"
A joyous Easter everyone!