Of Camp Fires and Wagon Wheels 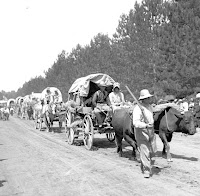 The wagon train had come far. Over forty wagons bore a ragbag of settlers — immigrants most of them — with their children, animals and treasures, family Bibles, traveling essentials, to build a new life. Wagons snaked across the arid wastes of the great Alkali Plain towards crags and outlandish rock formations out West. Never before had the settlers seen such things, but hope of a new life overcame fear of the unknown as they pressed on.

Such travelers are inherently independent, often unruly, a rabble with mixed and often contradictory motives, dreams and capacities.

All that drew them on together was hope of a better life.

Each night the wagons circled round and lit a campfire. This prevented the animals running away, and kept the wagons safe from marauding beasts and occasional native American raiding parties.

The captain had some responsibility, but little rank to pull. His role was largely confined to getting everyone moving in the morning and selecting when and where to camp come nightfall.

Cap’n Carey, moon-faced and avuncular, always dreamt of the clipped lawns, neat spires and town halls of his native New England. A large gold watch dangled on his rotund frontage, and gave him some air of authority. Strangers could think him self-important, but his friends knew this to be wrong. “We're building a nation” he used to say. “We're official.”

The Cap’n had official symbols painted on every wagon. They didn't particularly scare off the beasts or Indians, but they helped him feel more at home. Much of his energy went into the Wagon Train Committee. The task of the WTC was to keep everything orderly and official and minimise trouble. Few settlers knew who was on the committee or what they did, but its very existence made everything official, along with the Postal Service roundels, especially to committee members around their own campfire in the evenings.


Captain Williams was more a poet than a Captain. But his dreams were so powerful, his words so beautiful, that he had seemed just the man to lead a journey to the Unknown. The evenings seemed timeless as the settlers whiled away nights under the stars of heaven telling stories, comparing their family Bibles, and playing the guitar not very well.

Their own campfire songs became, increasingly, enticing. What with those and the occasional sausage sizzle, the settlers stayed up so late talking that the last thing they felt like any morning was saddling up or moving on, so they began not to. They say a diet of beans makes the cowboys gassy. Campfire talk got animated, contentious even. The cut of the women's bonnets and occasional line-dancing indiscretions became major topics for debate.

Some said the campfire was going down. Every now and then coffee dregs landed on red embers with a menacing hiss, but life could be worse. Was it weeks, months, or even years that settlers sat in a circle of wagons, by night telling tales, mostly about themselves, and by day snoozing.

Maybe this was the new world, thought some, whilst others became restless. Most settlers forgot how to saddle up or shoot and their spirited campfire discussions said less and less about the journey, the geography,  or even the horses.

In the end even the Cap’n had enough and signed off. All that remained were the embers of the fire, some creaky old wagons, a few family treasures, and ancient rock formations all around.

Over to You, Cap’n Welby. Over to us, too? Can those ancient rock formations reignite the passion to journey?
Posted by Bishop Alan Wilson

This fire ain't dead yet I'm sure. I reckon the bellows will soon be found, and the embers re-ignited. At least I pray so.

Will it end like the Donner party or the Stevens party?