Not Quite Dawn French... 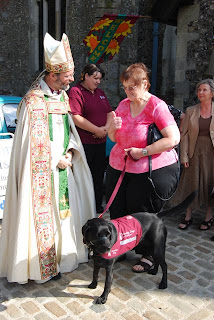 On Sunday I did a Francis of Assisi and preached to 100 dogs, in Great Missenden Church to celebrate 25 years of Hearing Dogs for Deaf People, whose headquarters is not far away in a converted stud farm at Saunderton. 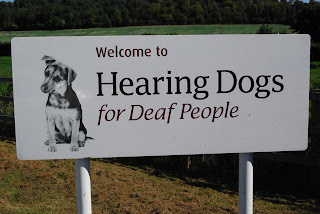 Hearing dogs began in a Portakabin, but has now become the second largest assistance dogs charity in the UK, placing about 1,400 specially trained dogs with deaf people. Many of the animals are rescue dogs. The whole operation calls into question patronising and sentimental views of animals. It also challenges the odd habit of defining exceptional people by what they can't do, and putting them in a box. A hearing dog, for many profoundly deaf people, is a good way out of the box. 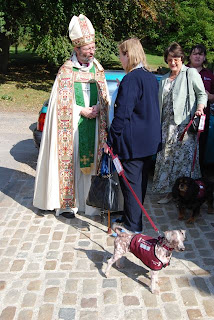 Not only are recipients able to tackle daily tasks at home and at work more easily, but the dogs have a considerable confidence boosting impact on the whole context of their lives. These are working animals like shepherd dogs. 8 million people used to watch One Man and his Dog — it's fascinating to see working partnerships like this on the streets of Britain as well as the hillsides of Wales and Cumbria.

It's always energizing to be with dedicated people, but seeing this partnership in action, and the way in which it turns round the isolation that deaf people often experience, was a real joy.

Incidence of hearing loss is going up, and present demand indicates a need to double the size of the charity towards a target of 3,000 dogs. That's something of a quantum leap (from £5m to £10m at today's prices) but when you consider that there are 2,000 profoundly deaf people in the Thames Valley alone 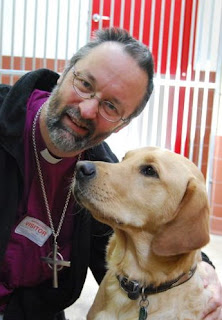 it seems anything but far-fetched.

Thanks to a fantastic group of people for a positive and happy afternoon, especially deaf recipients I met, and the charity's supporters and workers. Particular thanks to Peter, Ruth and Ann from Hearing Dogs, and Abi for so ably signing words I would have thought were impossible to sign, like "Buckinghamshire" and "Hammarskjold!" It was good to work with Roger Williams, our diocesan chaplain for deaf people. Believe it or not, there were absolutely no K9 noises off during the celebration (not even during the sermon)!
Posted by Bishop Alan Wilson

Was really happy to read this. Made my day. The second photo shows me with my bald hairless (VERY hairless) Chinese Crested Hearing Dog Amos. I'm a deaf nun, and Amos LOVES going to church! So he was very happy at this service because not only was it CHURCH but lots of other dogs. He was almost beside himself with joy - thought all his Christmases had come at once! Thank you Bishop Alan for leading this service - it helped as it was just two days after my beloved mother died with me and Amos at her side. Sister Marika Rebicsek