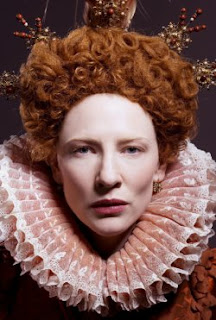 The Flicks with Stewart (at his request) yesterday to see Cate Blanchett do Elizabeth I. It's very different from her first outing in the role. She’s amazing, but more Flora Robson/ Mrs Thatcher than last time round. Cinematography & design are sumptuous. The script is lousy. Is it historical? The Chronology of Raleigh’s marriage ain’t, and Sir Walter does unhistorical Errol Flynn duty. It’s a simple binary Catholic/Protestant world with no awareness of Elizabeth’s religion the way it was, defined against popular Protestantism.

Has Blackadder the Second ruined the genre? There’s a flat pack Osama-like Philip of Spain who seems to spend all day down the Cathedral, shadowing a procession of a dozen Cardinals, who maintain their group cohesion like Kenyans on a training run, tripping out on Dago devotions. His Catholic Majesty strides purposefully around, with the air of a man looking for the rest room, or an exit. He also has a Chucky like daughter with a ghastly Mrs Thatcher doll. Off in England his shifty Jesuitical henchmen, mysteriously, seem to spend most of their working time tie-dying bedsheets red. Elizabeth treats herself to quality time down the health spa with the girlies from the office and has, weirdly, a Mini-Me who pootles nonchalantly around the Throne on state occasions, like the little chaps on Fort Boyard. Historical? Nah. 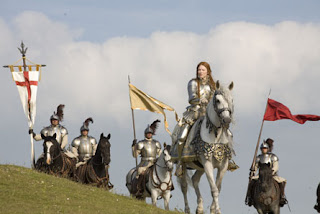 If, however, a myth is a made up story which gets the facts over, this is a historical melodrama steeped in authentic fantasy. Its ambience is what Gilly Goolden used to call “old toffee soaked in turpentine and strained through a tramp’s sweaty vest.” Cate is extraordinary, and, incredibly, almost manages to carry off the Clotheshorse Gloriana / Mrs Thatcher (3rd time mention)/ Menopausal Bridget Jones/ Boddice ripping thing. This film probably doesn’t quite work, and won’t be getting any Oscars, but it perishes in a noble and unusual quest.

PS You need to work out why the gun wasn’t loaded, or you won't actually understand the Mary Queen of Scots bit. (Tip for parents of 12 year olds)
PPS Since we’ve only got to 1590 there's still time for us male Cate fans of a certain age to see if she can make William Shakespeare blush in a notional part 3 (sponsored by a prostate charity?). This one get four stars out of five, for effort and design. Shame about the script.
Posted by Bishop Alan Wilson