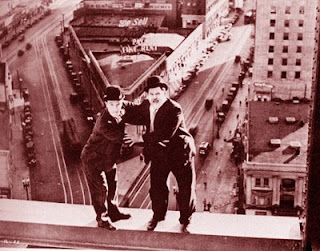 Excellent summary by Thinking Anglicans and analysis by David Keen, here and here, of this week's press puffdoodle about church attendance. A basically serious Christian Research Report has, apparently, been hacked around and hammed up, with an hysterical sauce added about, guess what, Muslims. What a surprise. 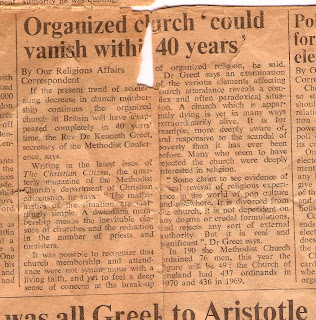 All I can add is this yellowing cutting from the Times of 29 July 1971. It solemnly announces, as a matter of mathematical certainty, that as Britain secularises all churchgoing in the UK “will have disappeared completely” by... er... 2011. So, according to the Times of 29 July 1971, in two and half years time there won't be anything left at all. What are you waiting for? Pull your finger out! Get your skates on! Haven’t you got homes to go to?

Gentle Reader, this all goes to show... the fun of statistics. I note that the paid circulation of the Daily Telegraph in 1971 was 1,454,581. In 2005, allowing for giveaways, it was 605,555. At that rate, the Diocese of Oxford Reporter, with its stable circulation of 65,000 will overtake the Daily Telegraph, as a matter of mathematical certainty, by 2035. What a bunch of crap!

It also goes to show how elusive and subtle the phenomena of religious participation are. Despite the efforts of Christian Research and others it could be we simply don't have the reach and depth of figures that would shed light on the detailed position. There’s a really thoughtful reflective trail on the real situation and its implications on Richard Hall’s excellent blog, and, from a Conservative Evangelical perspective, John Richardson’s. See also the Interesting discussion of hammed up news by Simon Barrow here.
Posted by Bishop Alan Wilson

The Evangelical Anglican I attend here in Surrey has more than 200 in the Sunday School, and, 450 miles away, within 5 mins drive of my in-law's house in Perth, Scotland, there are nine Evangelical churches. (At Christmas I identified eight, but have just discovered one more during my latest visit to Scotland!) Also, a large, clearly well-resourced National Centre for Christian Outreach has also just opened down the road from us in Perth.

I am reminded of Dr Arnold}s comment in 1836 — No human power can save the Church. Reports of our death always seem a bit exaggerated!