I ordained 6 priests yesterday at St Michael’s Waddesdon. Many thanks to Liz Welters, Team vicar and David Meakin, Team Rector for looking after such a large crowd so beautifully. Will Adam, rector of Girton (near Cambridge) preached a really thought provoking sermon, drawing attention to the things that change and the bigger calling that doesn’t. Pictures to follow. 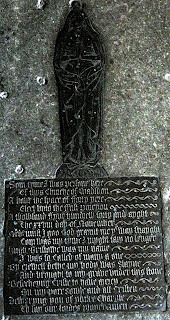 Meanwhile, amazing brasses in the Chancel tell their own tale of English parish clergy on the eve of the Reformation. Medieval Waddesdon was a prebendary (stall) of Lincoln Minster, a parish large enough to be divided into three rectories. In 1520 there were three rectors, each with a “portion” — Sir Richard Huntingdon of the third, Sir Nicholas Manuaring of the second, and plain Mr Hugh Bristowe of the first. Guess which one did all the work? Huntingdon and Manuaring were both censured for allowing their houses to become ruinous, so you can pretty much guess how much time they spent in the place. They have their own conventional brasses, clothed in magnificent vestments, holding chalice and paten. 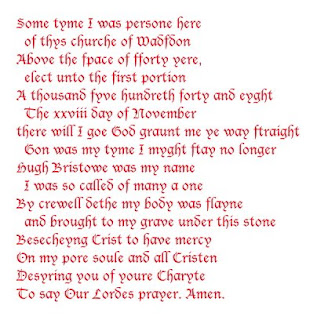 Bristowe’s brass of 1548 tells a very different tale. It shows him as a corpse in a winding sheet, as became very fashionable among later Anglican clergy (such as John Donne’s grave in St Paul’s). Hugh’s grave carries a plain inscription in crude English verse (Right)

On whose soul, God have mercy according to his beseeching! and inspire all of us who are ordained to follow him truthfully and humbly in the way that leads us home; and bless his servants Tim Bustin, Mark Griffiths, Paul Mansell, Kay Peck, Robert Tobin and Rachel Weir, ordained priests yesterday a few feet away from Hugh Bristowe’s grave, almost 460 years after his death.
Posted by Bishop Alan Wilson

That must be one of the best parts of your job!

The relative status of these priests would, however, have been the opposite of that which you imply.

"Sir" amongst the clergy was not a title of honour, but the opposite: it indicated a priest without a degree, and as such inferior to one entitled "M[aste]r" - a priest who was a Master of Arts.

It was the priest of higher status who did his duty.

WJ, many thanks for your correction, which makes the story even more fascinating for me. I assumed the title of M[agiste]r — it isn't in the brass. What is sure was that HB was the man who lived in the village and did the duty, because of the others being summoned for failing to maintain their local properties. It would make a powerful point about servant leadership if the highest status one was the one who was the mpst cmmitted pastor. Thanks, indeed for your point.