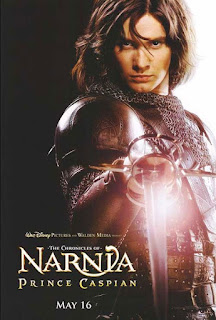 All aboard, me hearties, for Narnia round two‚ ding, ding. After a slightly frustrating year trying to engineer Adolf Hitler’s downfall from their home counties prep school, the Pevensie kids are raring to go. Down the Underground, they get a blast of the Narnian Pot Noodle horn and it beams them back, Scotty, to something truly surreal — the world’s first surf romp scene shot entirely in Trutex flannel school uniforms. Plainly, something magical is about to happen... 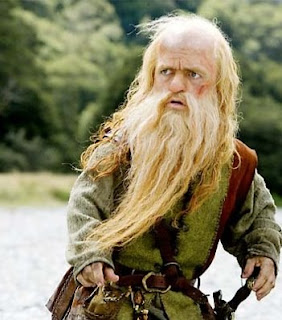 Narnia news is not good. Aslan seems to have done a bunk for 1300 years. Narnian Heritage are even more hopeless at looking after ruined castles than their English equivalent. Worse, a race of piratical nasties has invaded and taken over, and true Narnians are living, again, in their own underground. Prince Caspian’s a nice young man but his wicked uncle Miraz, more Philip of Spain than Osama, is jackbooting around the place with a nasty army of hardback beardies. These aren’t nice hairy Richard Branson, Rowan Williams beardies. These Beardies are Bad, and they have tin beards on the fronts of their little helmets, so don’t you forget it. There’s a big showdown, and once Aslan weighs in, guess who wins. Er... that’s it. 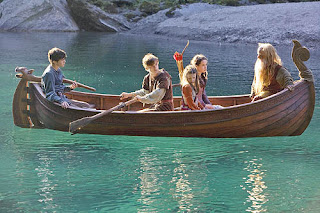 Dawkins Left brain headbangers will probably find less to offend them here than they did in the stone table sacrifice last time round. More imaginative people will enjoy the cornucopia of weirdos and misfits from the Classics department. Where else can you see a Dryad, a Naiad and all-age centaurs, derring do with a talking badger, a Rambomouse, and testosterone-charged gnomes? I hope it’s not giving too much away to say that Aslan’s fighting trees make the whomping willow look like Mary Poppins. It’s a potent bunch of chums, but perhaps too inyerface for Right brain Enya fans — light on poetry and heavy on action. Still, most of us use both halves of our brains, so there’s plenty here for everyone to like in a good natured action romp for all the family. 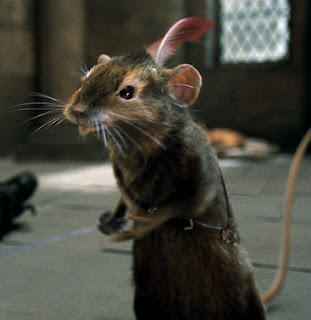 Even the beheading is tastefully done, according to the film’s slightly Janet-and-John house style. And therein lies the glory, but also the limitation of the main characters. They’re not wooden — just British. It was surely a good call not to stick sneakers on the kids; but this may limit many people’s capacity to identify with them. It comes off because the whole context is so surreal that the back-to-the-future aspects entertain rather than clunking or jarring. One or two tongue-in-cheek one liners cut into the action, lending a bit of irony and fun to the proceedings.

So what is this film really about, on a macro level, apart from chivalry and enchanted critters? 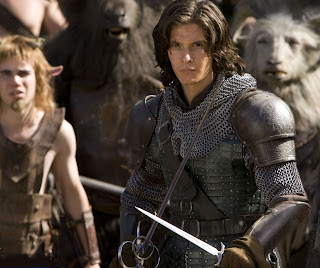 On a micro level, it says something very special about the London underground that four children can fall off the platform, grab a shedload of offensive weapons along with feisty gnomes, ten foot centaurs and assorted furry animals, then swashbuckle their way to glory through an enchanted kingdom, all without the management realising anything unusual is going on down there.
How long, O Lord? London Underground smashed Bob Kiley. Who’s next? Ken did his best. Maybe Boris can sort out the mess.


Check out my blog at www.trierer.blogg.se and give me your opinion on Western Sahara!

Well, you obviously liked it, Alan!

I didn't. I love the books, and for me this book surrendered too much of the magic and replaced it with endless battle scenes. The whole episode of the assault on Miraz' castle isn't in the book at all, and given that the plot was already crowded (and they were already leaving out a lot of Lewis' story) I've absolutely no idea why they would add that scene - other than it being yet another battle scene, of course.

They left out a lot of the homely touches, and they also left out almost all of the actual dialogue from Lewis' book. That's bad, because I think Lewis' dialogue is great (and, given that he had hosted evacuees in his home during the war, I think he had a much better idea of what their conversation would be like that 21st century film makers would have).

And what happened to the river god rising out of the river and saying to Aslan 'Hail, Lord - loose my chains'? In the movie the river god has become a sort of aquatic Rambo who is quite capable of loosing his own chains, thank you very much - and killing a lot of Telmarines while he's about it!

No thanks - if this is where we're going with this movie franchise, I'm getting off here. I'm especially glad they aren't going to get their hands on 'The Silver Chair' (my personal favourite).

So far I haven't read a single review that has made me want to go and see the film, and Tim Chesterton's comment above has just confirmed that view for me.

The station platform from which Queen Susan's horn called them to Narnia was not in the Underground but on a small sleepy country station along the lines of Adlestrop or somewhere. I know they're going for gritty and urban, but really...

Inspired by these comments I've had a look at teh book again. yes, the river god has been rather turned into an action hero, hasn't he? The novel is strong on characterisation and not as strong on action zapping up, so quite a bit of narrative filling in has happened. Was this just to show off CGI? I hope they stay a bit closer to the story in Dawn Treader, and would be horrified if the silver chair (personal favourite) gets too mch of this treatment. We'll see...