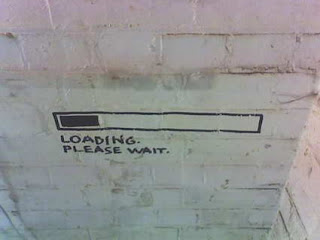 Whilst packing toothbrush and kit, I’ve been trying to work out how to blog from Lambeth. On the face of it, it’s simple; but I wonder how, remembering what this thing is and how it works. Large swathes of the conference are open, like fringe and public events. They’re easy, and the press will cover them anyway, as will various bloggers including me. I’ll post a blogging bishops feed column to collect an overview of what’s being said publicly from all sides. Blogs with no detail have no feed — but clicking should take you to them.

But what about the Indaba and Bible Study groups driving the conference?

Call me picky, but given that Gene Robinson isn't on the invite list for the Lambeth Conference, I'm not convinced he counts as a "Lambeth Bishop" (as on your blogroll to the right).

He's not a Lambeth Bishop, he's just a girl who cain't say no.

Praying for you all that the Holy Spirit will lead you.

Bishop Alan - you need one of these t-shirts. Maybe they can be made in purple?

Blogging needn't come with the same duty to impartiality as reporting. The best bloggers have very little distance between themselves and their topic. Yet at the same time they engage critically. I think it would be possible to participate fully and write from a personal POV while respecting other persons and their privacy. It might be a good spiritual practice :-)

Either way - prayers ascending from my corner of the blogosphere.

I have wondered what the heck the 'indaba' process meant and what it could lead to...

But after reading your description - I have some hope for Lambeth this year. To think of folk listenning to each and and for God's guidance - I'll be surprised if I'm not surprised by the end of this.

Excellent Tee shirt — comes in baby doll version, I see. Many thanks for prayers, Peter & Tim. We'll need them. Hope I'm getting the idea of this right — watch this space... I believe God can do great things in us if we let him...

Oh, and Huw, thanks for a fantastically helpful take on this. I knew it really, but it was good to be reminded, and makes the whole thing seem more doable!

The whole indaba process sounds very exciting. Good luck with the sensitive reticence and the radical openness. That in itself will be a really positive lead and outcome.

I have read your understanding of the small group activity planned. I do not see in it much hope as this appears to avoid the coming to conclusions. The Church is in need of the Bishops to put teeth into the traditional values they have heretofore put forward and the Church in Canada and the United States have ignored for the most part.

Events such as GAFCON strongly suggest that no action will mean some type of radical change in the Anglican Communion. It would be my thinking that if application of the indaba process to the present needs of the Church were subject to the indaba process that result might be interesting. Otherwise it hold little likelyhood of doing anything concrete.

I understand that the success of the enterprise is at least as much about the Spirit as us, and process as much as the structure in itself.

I can understand all sorts of perople being frustrated at the low prospect of conclusions, but there is a time for conclusions and a time for faith which may yield conclusions. The way Rowan put it at this evening's opener was to say that a mutual listening to God and each other process won't yield conclusions in itself, but without it we can be absolutely sure we won't come to any worthwhile conclusions. I am really sorry that some have chosen not to be here, but, of course, respect their decision. Partly because of that decision it is hard to see firm conclusions of the sort you may be seeking. There are, indeed, two provinces with no represemtation at all in the conference, and we miss their wisdom.

At a youth even in San Antonio in 1987 or 88, we asked the gathered teens to discuss this question: "If you were Presiding Bishop, what would you do?" In the middle of the discussion - when it was clear that some imagined our PB to have nearly-Papal powers of authority over local churches - we had to step in and enumerate the actual, canonical and constitutional powers of the PB and of the local bishops. The teens were left thinking, "hmm. Not much to do at all..." and we steered them towards ideas of fellowship, mediation, communion.

Lambeth is rather like that, I'm happy to say. It's not empowered to do (or enforce) anything - conservative or liberal. The first conference was specifically avoided by some for fear it would be a "synod" instead of a meeting of bishops of local churches. And, if I understand the recent media on Lambeth, this one has specifically been set up to avoid the image of a decision-making body.

The question - as it was for Peter and Paul - is "Can we eat together?"