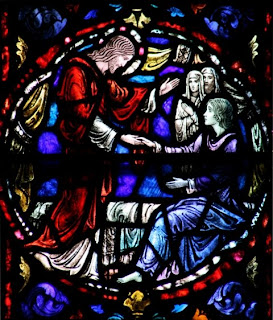 Presiding at the Eucharist this morming for a religious community, the Gospel from St Matthew told of Jesus and the woman with Haemorrhages and Jairus' daughter. These gave some hope of healing and resurrection. The verses just before, I notice with great disquiet, had Jesus laying down the very un-English principle that new wine requires new wineskins — not great politics, but the sober truth. I can say, with some relief, I'm not a part of this afternoon’s discussion. We’ll see how and where the Spirit leads, and try and make it work, whatever.

Driving back, it struck me that the Bible contains all kinds of praxis, including women judges in the OT and a gender balanced leadership in early Churches. The NT tells women to wear hats and ask their husbands when they get home, as it tells slaves to obey their masters cheerfully. 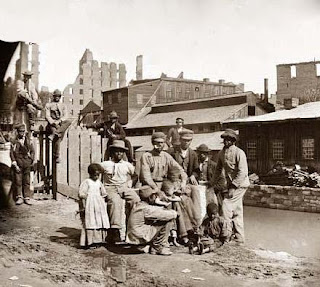 It's a command to live incarnationally within the real world. Following that command today would take you to a missional place where female subordination wins no respect, and slavery is gone in spite, you may feel, of the clear teaching of the Scriptures, if you take their advice to slaves as absolute rather than circumstantial.

From a Catholic viewpoint whom you ordain is a matter of canon not dogma. I respect and very much like the tiny number of petitioning clergy we have. I hate the idea of the church causing them distress. I wish they had been able to come up with some way of locating their convctions aganst female bishops in some bigger moral framework, in which there was some positive candle, apart from inertia, reactionary fear and hurt feelings. I would love to have this explained to me, but nobody has so far come out with anything remotely convincing on this level to any except their own. 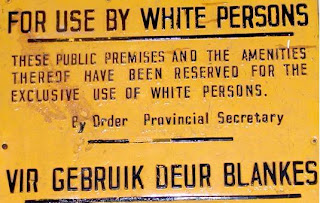 Talking to non-ecclesastical-anoraks, Discriminatory is as discriminatory does. For them, rejecting gender inequalty isn’t a fashion statement. They believe, deeply, that discriminatory attitudes and behaviour are disgusting and immoral. The Church preaches hope and new life, but seemingly behaves less ethically within itself, as they see it, than Woolworths. To reply that ’tis all, in truth, some kind of Father Ted voodoo mystery thing means nothing at all to anyone who thinks this way. This is as big a missional no-brainer as disobedient wives and truculent slaves 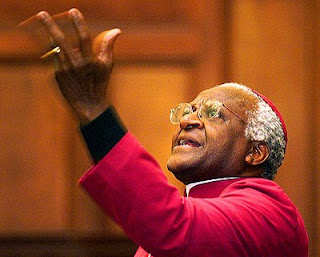 would have been in the early church. No system of pockets within which gender based discrimination is OK can cut any ice missionally. Pragmatically, perhaps you can abolish racial discrimination in Alabama whilst keeping a few all white buses, or all-white drivers’ rotas. On every other level, it just don’t make sense.

That’s the mountain our so-called traditionalist friends have to climb, and sincerely I wish them good luck with it. I can’t join them on the climb, because I believe passionately in the Church’s mission, and at the heart of that is the building of a kingdom in which there is neither male nor female, slave nor free, but all are called to be one in Christ Jesus. Period.
Posted by Bishop Alan Wilson

Amen to all that!

Thank you for that very inspired read. As a woman who is desperately saddened that such a debate even has to take place with the CofE, what you write is a breath of fresh air!

mmm just wish the whole issue was as simple as you suggest - but actually you illustrate precisely what is not understood about the traditinalist Anglo Catholic position. Jesus seems to have broken all sorts of boundaries with women in his incarnational cultural context - but despite their presence at the heart of his ministry he did not make them apostles. (so goes the Catholic argument) As regards the analogy with Alabama we actually committed ourselves to "a partly white drivers rota" back in 1994 and by- and-large few women priests have been discriminated as a result and indeed the compromise has worked far better then I ever dreamed. Had that commitment not been made then women might continue to this day to be discriminated against and barred from ordination to the priesthood. So any mountain climbing is actually now with those of us who want Bishops who are women - how can we with any integrity go back on that commitment made 14 years with the altogether more difficult issue of Bishops who are women. A compromise with generous provision will enable us to move forward - and I doubt there will many more parishes seeking alternative episcopacy than at present - unless some very PC and inappropriate appointments are forced on reluctant Diocese.Just to be clear I am all in favour of Bishops who are women - but risk losing Anglican friends and family if the provision for those who in conscience (which is not actually dependent on your or my understanding or approval) do not share my view is not honoured - and it is rarely held out of inertia, reactionary fear or hurts feelings as you suggest. Many know that it is discriminatory and illogical - but cannot adapt their faith to suit others criteria - guess that in the end is what conscience is all about - it is deeply subjective.

Thanks bishop for so inspired post.
In my blog I'm adding a one more voice to overcome traditionalism that is the perverted version of truly tradition!

I know that some will find my response a bit too up front, but to be frank Ive yet to hear a sermon from a female priest that inspired me. Not all men insire either, but the practical institution of running a church requires that it has some attraction and uninspiring sermons (or whatever you might call the delivery of the teaching - be it a sermon or a musical performance) are essential.

Discrimination has many facets. The growth of technoloigy has enabled us to reach a point where a choice can be made at time of arificial fertilisation as to the future of an embryo based on gender. In New Zealand the recomendation to government is that such a practice should be made legal for human embryo implantation. This sort of goes against the otherwise acceptance of gender equity (- which is a falsehood anyway - only a fool would consider all genders to be equal in all respects)

The fact remains that me - as a regular church attendee - isnt interested in a female vicar. And its from the likes of me - an almost 60 years old who is the group who keeps mthe instituion finacial - that will keep it going .

Thanks for all posts. Thanks anonymous (2) for a really helpful picture of the how things look from other perspectives. I hate the idea that conscience is entirely subjective, but admit you may have a good point. Having met, many years ago, a lady who wouldn't eat with blacks as a matter of conscience, we need moral priniples to tune our consciences, or religion easily turns into licensed insanity. I'd love to hear some account of the anti-women-bishops position in moral terms. As a matter of good order and charity, I will of course operate any new code of practice as consistently and fairly as I have respected and operated the present one, however much I may disagree with its ecclesiological incoherence, giving any benefit of the doubt to the weaker conscience. There's also, and this is another dimension of the problem, a major geographical distribution factor about present arrangements, that may impact weirdly on where we end up.

I find at times that the 'church' has such a wonderful way to confuse itself and tie itself up in knots. All this requires energy to do and while that is taking place the energy is diverted away from the current of the river, the river that flows to reach out to everyone with the love of God. I know the subject of female Bishops and yesterday's decision goes to show the love of God by their inclusion into the authority of the Anglican Communion and that is the right thing. I just have to chuckle to myself at times though as we get so inward looking as we 'think' we are doing God's will. It will never be perfect but once you have a large organization, be it a church or secular, you have created an animal that needs feeding for itself! My prayer os for wisdom upon all in the synod to exercise their duties with truth and dignity and for the love of others.

Interesting refection, Steve. I hold out absolutely no brief for the Daily Mail, but a piece in there this morning by Stephen Glover ( http://www.dailymail.co.uk/news/columnist-244/Stephen-Glover.html ) pretty much expresses exactly the state of feeling as I find it among Conservative tradtionally minded members of the Church of England (as distinct from radical reactionaries and neo-Puritans). I commend it for study...

"I respect and very much like the tiny number of petitioning clergy we have. I hate the idea of the church causing them distress. I wish they had been able to come up with some way of locating their convictions against female bishops in some bigger moral framework, in which there was some positive candle, apart from inertia, reactionary fear and hurt feelings."

Might I suggest you talk to some of them about it then? Read "Consecrating Women?" or talk to someone who can explain it well. My concern is that the attempt by traditionalists to find a way to have both Women Bishops and Traditional Catholics has been ignored and, instead, replaced by a suggestion (i.e. the C of Prac) which is both theologically unsound to those of us who are opposed and discriminatory toward those women who will be working under it.

A separate structure would mean theological coherence and space to talk. A Code of Practice is inadequate for traditionalists and will be unpleasant for women clergy and their supporters.

As someone opposed, I would vote against a Code of Practice as it encourage bigotry and that is not what we're talking about.

I'm afraid I don't quite follow why these various thngs are the case. That is the essence of my problem, along with the failure of people who feel as you do to relate their convictions to some bigger purpose. I also have to say that I was simply not persuaded by "Consecrated Women." I am not on the synod, but would have gone with a separate dioceses option had that been the mind of the synod — Lord knows I've lived quite happily with what we've got, and it's been a happy experience in Oxford, mainly due to the qualities of bishop and clergy involved, and the fact we are all friends. Whatever is arrived at in the end I will work with; and acknowledge that the whole thing might prove impossible in this synod, after the meeting in February. What I don't see as theologically coherent is more functional donatism/ novatianism and other theologies of taint which horrify every RC I meet, for reasons of fundamental ecclesiology. I would value a more positive and coherent sense of what traditionalism is about, not only for its own sake, but also because the various con tradictory constituencies within it (e.g. Western Use as against Prayer Book) are getting harder to recruit to as, e.g. Prayer Book Catholic clergy retire. I am also unconvinced this can be made a matter of dogma rather than canon, and have seen no rationale for this.