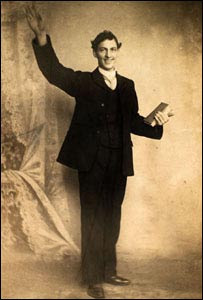 Basil Hall, my Director of Studies when I was an undergraduate, taught in a Presbyterian seminary in Wales, I believe, just after the Second World War. There, in a mental hospital garden, he encountered a quiet elderly man, rather broken in manner, whom they said was in fact Evan Roberts, leader of the great Welsh Revival of 1904-6. He suffered a massive breakdown in 1906 and withdrew from public ministry. The Western Mail said of him, on his death in 1951,

He was a man who had experienced strange things. In his youth, he had seemed to hold the nation in the palms of his hands. He endured strains and underwent great changes of opinion and outlook, but his religious convictions remained firm to the end 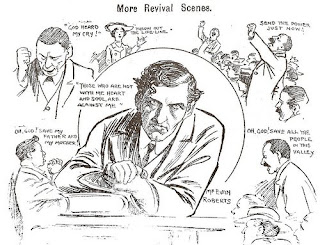 As a young man in his twenties, Roberts, a former miner, ignited a chain of dramatic Evangelical conversions that swept 100,000 people into the chapels of the Principality. Before that time Wales wasn’t known for male voice choirs and teetotalism — it was the Welsh revival, they say, moved the goalposts. 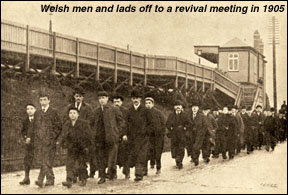 Real life is strangely mixed — Swift satirised fair tulips sprung from dung. Among my favourite movies is Steve Martin’s Leap of Faith, which affectionately parodies an Elmer Gantry shyster revivalist. Jonas Nightingale pulls all the tricks in the book but finally a little girl is genuinely healed, rain really does come to the dustbowl, and the joke’s on us all, as well as him. 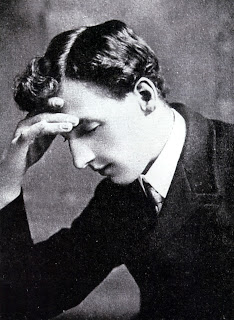 Cue a couple of posts from Maggi Dawn, here and here, about the breakdown of Todd Bentley’s marriage (details from Brother Maynard here). Earlier this summer a friend who’s a nearby Baptist minister was kindly critiquing the Lakeland revival on the basis of some UK follow-on stuff he’d attended. Amidst much extreme stuff (people being knocked over in a supercharged atmosphere some outsiders would associate with stage hypnotism rather than religion), I would lay serious money some people have actually been helped to genuinely good places they otherwise wouldn’t have reached. 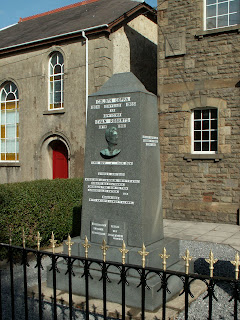 If it’s a spiritual virtue to value the person more than the sins they commit, perhaps it’s also prioritising mercy before sacrifice to look to the human being amidst religious hype, to remember them personally and charitably in our prayers, and to recall that in the end we’re all in the same boat.
Posted by Bishop Alan Wilson

I was, and am, incredibly sceptical of Mr Bentley. I thought his methods verged on the dangerous, his actions showmanlike rather than workmanlike, and his theology frankly dangerous.

We should remember, the next time this all rolls around, that questioning is not about being judgemental, but about reasoning our way. It Is. Not. Right. To simply say "oh, it's God, it's God, just carry on and it'll be fine." That way madness lies.

I feel for Bentley. His marriage was put under immense pressure and the signs are not good.

If anyone knew, if he had known, if he had seen the problems, would that have helped? Could he have cut back? 1 Timothy has an injunction that elders should be well thought of, 'the husband of but one wife', upstanding and of good character. This is as much if not more for THEIR protection as for the church's public image. Public ministry is a big strain to put on something that is shaky to begin with, and imploding church members help nobody.

I pray for a good end. God knows Her business, after all, and She's pretty good with miracles.

It is an important reminder and one that I take to heart today, as I am often among those who criticize or mock.

I so dislike having to admit that, but how can I not?

Not only have I seen such outpourings of the spirit but I have also found myself in such a situation where God has worked wonders and many have come to faith. That was over ten years ago now and it was a wonderful time to see God move in such a wonderful, loving way. It was in a small group from our Church and nothing on the scale as Florida. But many things happened. So I do not judge such events as Florida except for the real fruit that comes out of such meetings and it is really sad to read of Todd's marriage ending. I may not agree with his ministry but anyone who's marriage is going through difficult times has my prayers. May the Church know to love first and hold back any criticism. Thank you Alan for your well written post here.

"I would lay serious money some people have actually been helped to genuinely good places they otherwise wouldn’t have reached".

That's probably true. However I wonder if the converse might also be true; that is, some people have been left in a bad place that they might not have reached.

Perhaps there's sometimes a very thin line between life-changing (in a good way) and abusive (also life-changing). I feel this is a very dodgy opinion to hold, because it could be misconstrued as meaning abusive doesn't matter, when it plainly does, very much. Strengthening weakness is a healing thing; but picking on other people's weaknesses and making big promises around them is not. And what about the "Leap of Faith" scenario, when a total Steve Martin shyster is actually unwitting part of a real healing?!

For those of us trying to discern the spirits, I'm sure the "by their fruits ye shall know them" test is the only one we can go on; and the toruble is we don't know the fruits sometimes till way after the event. maybe that is just saying we need to go on faith; but not entirely blind faith.

I once had a good friend who went on a Christian healing weekend to be healed of her sense of rejection. they put them in pairs, and her pair was very talkative, so that she never got a word in edgeways until the nday afternoon, resulting in the experience of going on a weekend to heal rejection and getting rejected — kind of "I phoned the Damaritans and they were out"! I went to see her MOnday to find out how she'd got on; we ended up ROTFL. A few weeks later a friend got her involved in Christian listening — a rather different way forward; but she made incredible strides forward.

Funny old world... ! May thanks for stimulating comment; tme for a bit more reflection, I wot!