Pigs in lipstick — time for Chivalry 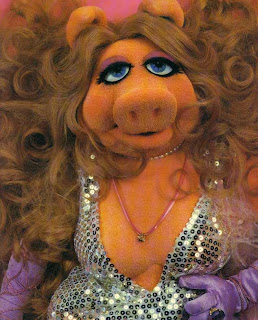 I’m having a slightly surreal time over here, trying to work out this pigs and lipstick thing. Apparently Barack Obama said:

You can put lipstick on a pig; it’s still a pig. You can wrap an old fish in a piece of paper called change; it’s still going to stink after eight years.

[Hillary Clinton’s plan for healthcare is] vaguely — not vaguely but eerily — reminiscent of what they tried back in 1993. I think they put some lipstick on the pig but it's still a pig.

Is this a cheap shot at Hillary’s femininity? And, Mr So-Called Obama, what about fish? Also, try and deny it, your comments are totally piggist.

For the past 600 years Brits have had their own Norman French slogan for these occasions — Honi soit qui mal y pense (“Evil be to any that think evil of it.”). Nice that it’s so relevant. It speaks truth into this situation, and takes us all back to the dear ol’ days before everything went to hell in handcart. Vote for Edward III! Up with the Treaty of Crétigny! Bicameral parliaments Now! Down with the Black Death! Free public bow and arrow shooting on the village green for the French wars! It’s time for a bit of true chivalry in politics...
PS: Anyone seen discarded lipsticks near any pigs they know?
Posted by Bishop Alan Wilson

Our guinea pigs have nibbled on a lipstick my daughter dropped in the garden. Does that count?

Boy, you can see why so many nations look on and decide that Western democracy is decadent and immoral.

This post brings forth something that in my American-ennui-to-despair-mode that this election has pushed me into has kept me from thinking...

WWMPD?
what would miss piggy do?

Hmm. Remember what Kermit the Frog used to say: "It ain't easy, being Green."

This whole thing reminds me that we should stop animal testing of cosmetics. Yes indeed.

Thanks for bringing Miss Piggy into it: I see she's not wearing any lipstick in the picture!

Do we all look as silly as we sound?