Keeping the Faith in High Wycombe 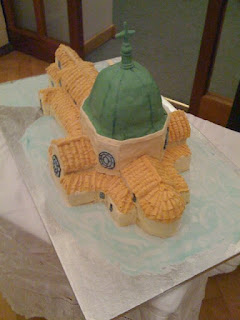 70th anniversary mass last night for one of our (comparatively few) Anglo-Catholic churches in Buckinghamshire. Set in a tough urban landscape, St Mary & St George Sands has been a real landmark since 1938. This is a simply lovely place to sing Mass; it has a simple resonant interior. Its real glory, however, is a wonderfuly mixed and close congregation — which has grown a recent ordinand, with another on the go. There’s a warmth and spirit here, exemplified by the celebration cake (The roof was fudge flavoured icing).

I was struck by three quite particular indications of spiritual strength in depth here:
Mother Susie Simpson is leaving soon, to follow a calling to serve as a priest among young offenders at the (original) Borstal in Kent. There’s a fabulous job here, wating for the right person...
Posted by Bishop Alan Wilson

Nice cake, and I love the inflatable Earth.

Well you know, a green dome must be a mosque (the cross was obviously just protective camouflage...)