A League of Gentlemen vision from hell: 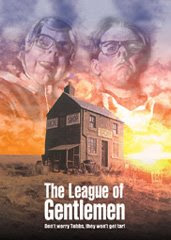 Tubbs and Edward run the local shop, despite the fact it is far away from the actual centre of the town. However, they believe themselves to be local and will protect their localness by any means...

Have you ever experienced churches like that? Self-obsessed, paranoid, sourly political, dwindling disgracefully. There’s a lot of it about. Here’s to us, who’s like us? And the enemy is Them; everyone else; diocese, deanery, whatever. Visitors sometimes encounter weird attitudes and assumptions in Entirely Local shops — and churches: 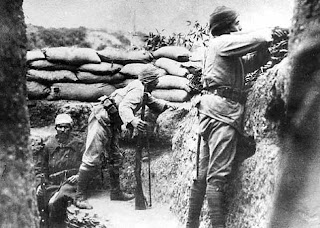 Of course the particular local people, congregation, parish, whatever, with whom you do your Christianity is a key part of the delvery system. But it isn’t everything. The National Deaneries Consultation at Swanwick is a biennial opportunity for area deans and lay chairs to raise their sights a bit. I’ve been working there this weekend with Janice Price, missiologist. Area deans and lay chairs from over 20 dioceses have been looking beyond their particular trenches, aided and abetted by resource people and ideas from all over the country. 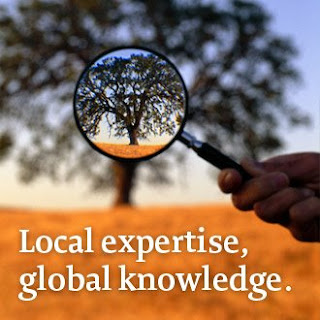 Ecclesiologically, Christianity is a Universal reality, a new humanity, a global (= “Catholic”) reality, locally delivered. Jesus said his Kngdom was yeast inside, not top down or bottom up. NT Christians necessarily did Church bottom up not top down, mainly because there wasn’t a top, and the whole thing wasn’t institutionalised yet in that way. The Reformation was about recovering this authentic perspectve out of the institutionalism and powergaming of Western Christendom, which Eastern Orthodox Christians had never surrendered to as a total vision anyway. You can see the diocese, not just the congregation, as the local church. Doing so can free up relatonships and attitudes for mission, if only we let it. 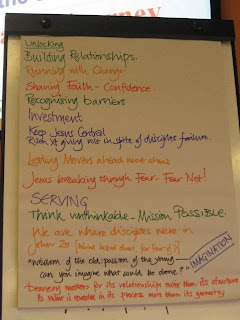 So the value of the Deanery is not about structures but relationships; its strength is not geometry, but mission process. We have to work missionally and relationally, refusing to surrender to the boring old Tubbs ’n Edward Blockhouse mentality. Response points from the floor at the final Bible study and reflection Janice and I led together were encouraging:
Unlocking — Building relationships — Running with Change — Sharing faith with confidence — recognising barriers — Investment — keeping Jesus central, who valued his disciples in spite of their failure — Serving — Thinking the unthinkable (Mission Possible) — We are where diksciples were in John 20 (behind locked doors for fear of...?) — Imagination.

They reminded me of Greg Ferguson’s powerful, inspiring summary of Church history, Fast Forward, and his passionate comment on parochialism and narrow denominationalism:

Don’t be foooled by the joyful sound,
Don’t step over the dividing line;
You stick to your kind: I stick to mine.
Tribes of the global population,
races and denominations,
worshipping separately;
Bowing before the same God,
but would rather die than gather under the same roof.

I want to ask you, my Church,
how have you survived?
What mighty engine keeps your cells alive?
What great heartbeat has sustained you,
When pain contorts you and sin stains you?
Through the trough of human sorrow,
Who has lifted you to tomorrow?

There are and always have been
The invisible ones,
who never made a name,
rejected fame,
the brick and pillars, the crossbeams of the Church, 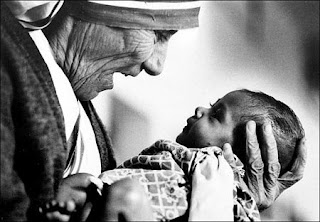 The wisdom of the old; the passion of the young. Can you imagine what could be done?
Posted by Bishop Alan Wilson

Churches that teach and celebrate with the whole congregation the life of faith are usually alive and growing. Those that preach guilt, i.e. we need to do more or we should be doing this or that to live out our christian faith are usually stagnant or shrinking.

We need a mix of teaching but after many years in the c of e and after hearing hundreds of sermons on the subject that we are guilty and next time need to do better, I am bored with being made to feel guilty every Sunday, I want to hear a sermon that says, "hey your doing good and keep it up, show others how you live it and enjoy your faith!".

I feel that the quality of sermons is vital but the church lacks to reach this with certain individual churches.

I know we are all only human but this is how we can grow the body to help give it strength to go out and share the good news.

I am so tempted to take scare cards each Sunday and lift them up at the end of the sermon to show my opinion of that sermon. Sure others may love it and I may not but it is so tempting...!

The c of e should hold its own 'X factor' for preaching sermons!!!!! Imagine the fun that would generate!

It's funny how strong the (Pelagian?) streak is in (English) Church life — the “pull your socks up” message that ministers less grace than it could.

Score cards on sermons would be fun — I can only imagine scare cards!

Thanks for telling us a bit about the conference. I really enjoyed and benefited from it two years ago and would have loved to have gone again. Unfortunately, cost and a family event intervened this year. Maybe next time...

It was a ball, Tim. I hope it is next time, and we both make it along. We could, perhaps, put together a funding package for Bucks people to go. I think we said area deans could claim on expenses if lay chairs were deanery funded...

The Reformation was about recovering this authentic perspectve out of the institutionalism and powergaming of Western Christendom, which Eastern Orthodox Christians had never surrendered to as a total vision anyway.

I find it difficult to find any historical basis for that claim in anything Luther, Calvin, Zwingli, Henry VIII, or Cramner actually wrote.

Dear Bishop Alan,
thanks for this too - you interviewed me once and I didn't get the job but no hard feelings! I'm an area dean now, but in North Wales, so I didn't get a chance to go to this particular event - is there any form of summary of main discussions or the such-like that might be available to brothers or sisters in our little province?
Adrian Copping

Adrian, very glad you made it into the Area Dean role! As to the conference, there is a reporter there who writes up the sessions for a booklet, which will be issued free to subscribers to CHDG's deanery exchange mailings — only a tenner a year and available on the CHDG website. It may be a while before it's all written up and out. I used to find the joy of the consultation was the trip with my lay chair, where we could put the world to rights and talk about all the things you never get round to in a regular working relationship.

anon, I wouldn't say the redefinition of institutionalism in the Church was driven by the writings of Henry VIII (Quite the reverse — he was trying to put the conservative brakes on) or the other people you mention. But it's what happened, driven by popular sentiment which by 1517 had been growing throughout Western Europe for a long time. If any writers were driving it, Erasmus and his circle? but the contribution of any particular writer to driving the reformation process is inherently chicken-and-egg.

What is incontestable, I would have thought, is that the Sixteenth century in the West did see NT models used directly to redefine institutional Church in both reformation and counter-reformation Europe, especially the former. Even Conservatives like Henry VIII weren't, pace later RC propaganda, trying to start a new Church, but to recover the authentic one, as they saw it.

Bishop Alan,
many thanks for that info about the booklet - I will follow it up - my Deanery Lay Chair is a recently retired Diocesan Secretary (Chester) who is a great partner and who will no doubt find useful things to discuss if we both read the material - thanks again.