After the dark psychotic loonery of No Country for Old Men, the Coen Bros Get Smart in Burn after Reading: 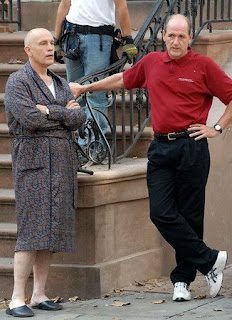 OK, here’s the skinny. The Busted Baldy is John Malkovich. The Blithering Bastard is George Clooney. The Bewildered Bimbo is Frances McDormand. The Bitch is Tilda Swinton, alongside Brad Pitt, the Butch. Playing at the top of their games, in this movie everyone plays the complete bloody fool. The dense fog of secret war surrounds the lot, and all you can make out through the Coen brothers’ stylish and spicy farrago of idiocy are ignorant armies clashing by night, but in broad daylight, like drunken fairground bumper car drivers who wouldn’t stop just because the sun had come up. 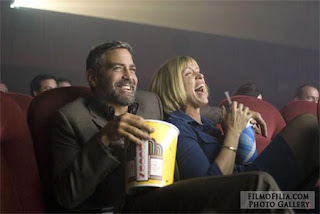 This is both a terrrible and a brilliant film. It's a complete and total mess, but somehow the Bros pull it off, and Catherine, Tim and I were vastly entertained. I think we learnt something, too. Although there are laughs aplenty to be had, the most powerful well-equipped outfit in the world is as incapable of working out what the hell’s going on as the rest of us. This is the stuff whereof crises are made, friends. Sleep tight tonight.
Posted by Bishop Alan Wilson

I suspect it's a movie people love or hate, but few will be neutral about. We loved it; its anarchistic twist on the CIA lifted it to a new dimension compared to, say, Get Smart type gags about dumb secret agent goings on...

We saw it last night and rather enjoyed it.