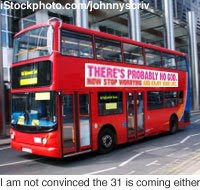 To those without a huge vested interest in promoting or dissing religion, this probably looks a slightly odd initiative. Frankly, the slogan is a bit anodyne. It's the non-believing equivalent of "God may very well exist. Now have a nice day". But it will probably still be enough to upset counter-evangelists of the kind who like to tell everybody they are going to hell for not subscribing to their particular doctrine, and who think atheism is very, very naughty.

I wonder what impact this kind of campaign has, though? It will appeal to those who like that kind of thing, no doubt. And in part it seems to have been born out of resentment towards comparatively prodigious (and extremely well-funded) religious advertising. But apart from raising brand awareness, I suspect that the vast majority of people will be as sceptical about being sold unbelief as they are about being sold belief. Well, unless someone is thinking of throwing in a free set of wine glasses or something.

Perhaps this particular ad is more agnostic than atheist, and we still have to await a genuinely atheist poster ad. The wording puts me in mind of a brilliantly funny song by the world’s first Atheist Gospel Singer, Susan Werner, which I sometimes play in the car for a chuckle. 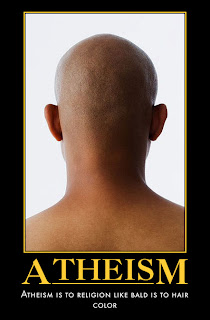 Actually I suppose, like the ads, the song’s more agnostic than atheist, really. The humerous twist at the end is a refreshing break from the characteristic grinding pig ignorance associated with Dawkins and chums over here. Nothing in the ad isn’t in the Bible anyway — its line is characteristic of some strands in the Wisdom Tradition. And because God is implicit in everything, anything that raises the question actually helps people on their own journey towards him — as the sermon on the mount says, those who seek, find. It happens every day, and whilst these ads may well annoy people of a fundamentalist persuasion, they will raise a big question creatively for some people who might not have prayed Psalm 49 at a Cathedral evensong or read the book of Job recently...
Posted by Bishop Alan Wilson

Forget the bus ads - Susan Werner?! Wow, that was great!!

Great video, Alan. For those who want to read my article on "atheist evangelising", it's here: http://tinyurl.com/5axuy7 I will also be discussing the "happy bus to nowhere" with its instigator, on BBC Radio Northern Ireland's 'Sunday Sequence', at 9am on 25th October. Beyond the amusing and entertaining aspects of the whole thing, there are interesting and serious issues about how we commend our beliefs, the extent to which the philosophy reflected on the bus slogan is widely shared (much more than many church leaders seem aware) and so on. Grace and peace, S.

Quite a lady, I agree, and an excellent musician. She obviously had a conventional working class Catholic upbringing, and has managed to capture the good of it nicely, whilst being very sceptical (skeptical?) about dogma in a playful way. Whilst obviously on the rebound from her parents' religion, she is finely nuanced and thoughtful about it.

Thanks, Simon. I'm beginning to think that atheism is a marvellous, and probably necessary, “absolute zero” datum point for working theologians (as baldness is to hairdressers), but a lousy religion, particularly when people start being fundamentalist about it...

ew Living Translation (©2007)
For ever since the world was created, people have seen the earth and sky. Through everything God made, they can clearly see his invisible qualities--his eternal power and divine nature. So they have no excuse for not knowing God.
http://savagespirit.wordpress.com/

To quote Karl Barth: "no"

thanks for this link to Susan Werner which I have blogged and been linked by a visitor to another gem by Susan Werner http://www.youtube.com/watch?v=yKJXyMoLOWU the alternative Our Father