...as a direct result of your journalism, within hours of arriving back from France, where, among other excitements, the Boulogne harbour authorities arrested the cheapo ferry on which we were booked for allegedly not paying port dues, I feel I have to get straight back out to the pas de Calais to see the Anthony Caro Chapel of Light in Bourbourg. 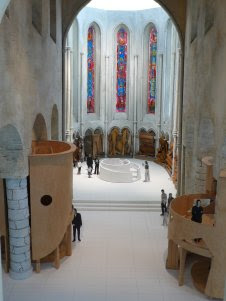 ... when you see what the 84-year-old former pupil of Henry Moore has done with light, water, steel and wood you appreciate the logic of the commission, for this is not so much a repair job as a work of art. The church was a victim of friendly fire: according to local legend, during the Second World War, a British pilot on his way home suddenly came to the awful realisation that his plane was going to crash. Rather than land on the houses, he steered his aircraft at the church, crashing into the choir end of the nave. The main body of the church was restored but the choir was left in ruins. 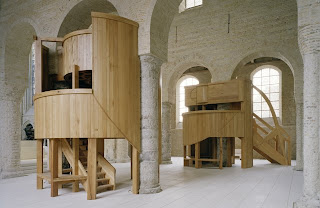 Ruth’s blog & video, references a fabulous Times article, interviewing Caro about the piece, his life and work. Rolls Royce journalists ask the questions you would want to, and open things out in a way which leaves you longing to know more.

I first encountered Anthony Caro’s work when preaching at Christ’s College Cambridge, where he studied engineering. I stumbled on a piece of his in a corridor; at the same time Tate Britain were running his Last Judgment, and I got hooked. 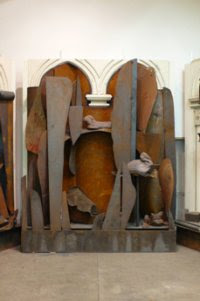 “We are living in an extremely materialistic world,” says Caro. “I think it is very important to help the spiritual side of our lives. So for this reason it is good to have a place where one can go and allow that side of one’s life to flourish. I hope people of all religions will use it to allow themselves to think and be tranquil and find that side of themselves.”

This wonderful commission was initiated (according to the French law of laicité) by Françoise Dubois of the Ministry of Culture. France has long had a very much more secular society than England, and, considered as a congregational entity, the Church there has terrible struggles and challenges compared to the C of E in the South of England. 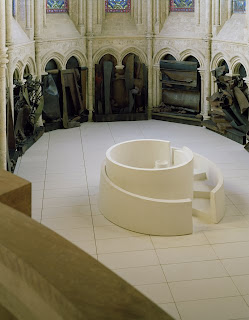 There are some very courageous and resilient Christians keeping faith alive in a secular cold climate. One local lay person described the comparative postion with England where she was as “half the numbers, and no fringe; most see the Church as little more than a eucharistic sect.” There is also a crisis about ordination numbers. It’s great to see some really creative work going on in this hard context; another green shoot from which God can renew his people.

Nothing for it, but a trip back to France on a day off sometime soon...

Bishop Alan, thanks for this generous post. The article you link to was The Times not Sunday Times however. Just one thing... your headline.... lots of blogs link to you and so now and I guess for a few weeks as a result, a google blog search of my name brings up dozens of blogs beginning with the words 'Curse you, Ruth Gledhill...' It was a bit scary getting in today after a funeral and finding that, it took me a while to track it down to you! But am v grateful for the mention and am taking it in good heart as a reminder to say my prayers before I go to bed tonight!
Ruth Gledhill (commenting under anon because of the difficulty of logging into blogger that I always encounter).

Ruth — Many thanks. I've corrected the Times/ Sunday Times thing. I see what you mean about the title (oops — learning point...) I suspect I can't put the toothpaste back in the tube, though, and with any luck those who want to curse you will get a nasty surprise when they click on the link. I've added punctuation to try and make it look ironic... ! And thanks for a brilliant article and blog piece (PS I actually liked the music on the video, too!)