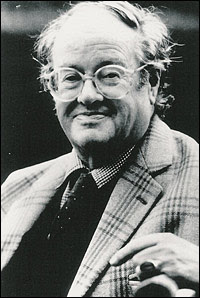 I was delighted to read the Times account of Sir John Mortimer’s funeral at Turville Church, Buckinghamshire. Among great tributes from his massed friends and admirers, the tip of a huge iceberg, I am glad to know the Vicar did a good job holding things together in Church, and capturing the spirit:

“Sir John called himself an atheist for Christ. He always came to midnight Mass on Christmas Eve. But he emphatically did not believe in life after death.
My hope,” she added, “is that he has had a wonderful surprise.” 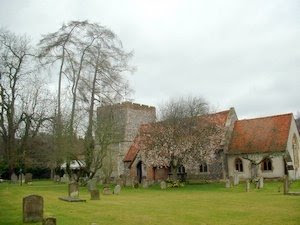 The C of E at its best, I thought. And the Atheism? It sounds as though God views atheism as a harmless eccentricity, which probably doesn’t really exist as much as people think, infinitely better than pretending to believe, which is a ruddy menace...

Of course, atheism was the charge leveled against the earliest Christians. So, being an atheist in a sense is returning to the roots of the faith.

A great creative mind lost, and a splendid job by the vicar!

May God bless him. But when I read of a woman vicar at that church I can't help thinking of Dawn French, Vicar of Dibley, which was filmed in the beautiful village of Turville.

I remembered the name of another drama filmed in Turville, the film Goodnight Mister Tom. I suppose that this would have been more to John Mortimer's liking than The Vicar of Dibley, for the story prefigures his "campaign to turn the school into a centre for underprivileged children from inner cities, who began to arrive in Turville to get a taste of country life", as mentioned in The Times report of the funeral.

Thanks for the reminder about GMT, Peter. A rather more mellow John Thaw than Inspector Mor(o)se. Another wonderful man.