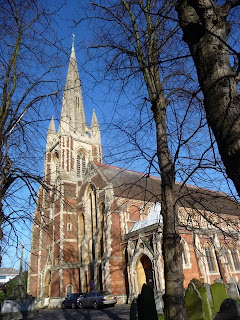 Great to be part of the Festival of Dialogue at St Mary’s Slough on Saturday afternoon, organised by Art Beyond Belief, and funded by the Equality and Human Rights Commission. Representatives of all faith traditions in Slough gathered for an afternmoon of structured dialogue and panel discussion, ending with a meal together.

David Sparrow is a photographer by background, who uses computers and art to unlock understanding, not only between faith groups, but as self awareness for autistic young people and victims of domestic violence. People who don’t know Slough are sometimes snooty about it, (and The Office didn’t help) but it is fantastically inclusive, with its long tradition of hospitality, energy and rich diversity.

Among other events during the preceding months has been a joint project with Slough Libraries, “Borrow a Person.”

If you have ever wondered what someone of another faith thinks about something that’s important to you, or why anyone would want to be part of a religion at all, come along to Slough Library and, instead of borrowing a book, borrow a person instead! The idea of ‘Living Libraries’ was introduced in 2000 by the Danish Youth organisation ‘Stop the Violence’. It has been developed in a number of countries and has been gaining popularity in English libraries. 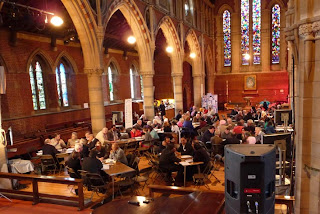 This is the first time that sessions have been offered in Slough. The ‘living books’ to be borrowed will be ordinary members of local faith communities, who will be happy to discuss their religion and traditions, faith and spirituality, beliefs and experiences and any other subject besides.

This was an occasion for hard mutual questioning as well as good intentions. From my own table, I was struck by two hard truths: 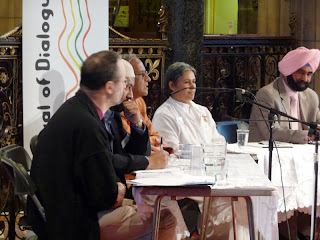 ‘Why dialogue, apart from as a tool for government social control?’ I was asked. The Christian answer is simple. God teaches that our highest duty is to love him, and to love our neighbours as ourselves. Love grows from respect, justice and active goodwill to understand. Without intentionally giving other people your attention and your respect, you cannot do this.
Posted by Bishop Alan Wilson

This sounds like a wonderful event and I wholeheartedly agree with your comments about government intervention.

The challenge, of course, is to keep the dialogue going once it has started. That takes commitment, but is surely essential if we are to nurture genuine (as opposed to tick-box) community cohesion.

This looks like a great event. I particularly liked the pictures of the event taking place at St Mary's - a church I knew well! I also remember David Sparrow with great affection - it's good to know that he's still doing great things!

It's not just The Office. A certain poem about Slough doesn't help it's reputation much either...

Sounds like a very good event at a time when Islamophobia is on the rise.

very good event, I missed it and I was nearby

I'm sorry I forgot Betjeman (on whom I'm usually very keen). Among other calumnies he says there isn't room to graze a cow. During the recent foot and mouth alert, Linda our work and economic life missioner in Slough, networked with and supported no fewer than 12 cow farmers in her area. So there!

It's impossible for me to have anything but good thoughts about a place where you get Urdu rock and a community/family meal for 300 with confirmations.

Barney, you're right of course; but I suspect that like your bit of North London, there's a good and well established process of community mutual engagement in the town. The problem is elsewhere...

I have been very impressed by the Art Beyond Belief programmes - great creativity. We need to maximise every means of bringing the broadest spectrum of people from each faith community into meaningful engagement with one another, to make dialogue three dimensional, and they have some exciting options.
By the way, thanks for your comments a month ago on our process in Luton. Peter

I guess atheism is not based on faith.

If you were left wanting more inter-religious dialogue after the conference, check out http://www.irdialogue.org, the new website of The Journal of Inter-Religious Dialogue™. The Journal is a forum for academic, social, and timely issues affecting religious communities around the world. It is designed to increase the quality and frequency of interchanges between religious groups and their leaders through its free peer reviewed Journal and online forums. Ultimately, the Journal seeks to build an inter-religious community of scholars, in which people of different traditions learn from one another and work together for the common good.

With the understanding that members of the clergy and lay leadership substantially impact the dynamics within their congregations and religious movements, the Journal of Inter-Religious Dialogue™ offers a novel way to establish long-term dialogue and collaboration between religious communities. Its content will include articles on the theological underpinnings of inter-religious work, best practices of organizations on college campuses and in the non-profit sector, and direct engagement of the difficult issues that religious leaders face in their interactions with one another.

The Journal of Inter-Religious Dialogue™ will be stewarded and peer reviewed by a multigenerational Staff of seminarians and religious scholars, and an illustrious Board of Scholars and Practitioners. This Board contains broad representation of academic disciplines, non-profit work, and activism, including Swami Tyaganada, Hindu Chaplain at Harvard University, Edward Kessler, Director, Woolf Institute of Abrahamic Faiths at Cambridge University, Burton Visotzky, Appleman Professor of Midrash and Interreligious Studies at the Jewish Theological Seminary of America, Eboo Patel, Executive Director of the Interfaith Youth Core, and Sheryl Kujawa-Holbrook, Academic Dean of the Episcopal Divinity School.

This sounds like a great event. i agree with Tim that interfaith dialog requires commitment. Currently, interfaith dialog is not a hooby that we indulge once in awhile, rather it plays a pivoltal role in threading different segments of the society. It has personal benefits as well. It does not only improve my understanding on other faiths, but also enriches my relationship with God. I'm impressed with views of an Islamic Scholar (Fethullah Gulen; http://fgulen.org/) on God and interfaith dialog.

Thanks — it was a great do. I'm off to Lambeth today (in the snow!) with Art Beyond Belief, as part of our project to develop a new kind of interfaith dialogue course, and make it available to varioius groups, including bishops of the Church of England. This will help participants raise their capacity for dialogue and understanding... watch this space!

Dialog efforts are the only hope for a peaceful world for our children. We need more scholars and volunteers working on building peaceful islands.

A voice from Turkey for interfaith dialog: