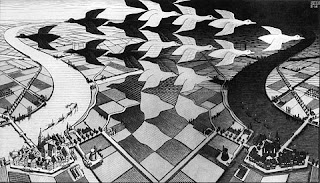 5. Church as Pilgrimage
A lot of eclesiology is based on how the ship is running, but the real question is where the ship is going! Christians do not see history as a giant circular recycling exercise, but a journey which begins in a garden and ends in a city. Between those points the community travels together, but with ragged edges. Certainly all pat attempts to specify who’s in and who’s out of the community don’t quite work. In the NT the Church is a community is one of hope, awaiting transformation and fulfilment on the basis of what it has corporately received, tying the two together under cover of bread and wine. It’s impossible to define exactly what its future goal will be like, though you can dream and paint and produce poems about it. It’s an experimental enterprise, throwing up new ideas and inspirations, some of which are better than others. Nobody knows the day or the hour; but everything short of this goal is provisional — an important safeguard against taking ourselves too seriously. Different elements in the whole may fall out, but in the end the Kingdom emerges from the Church which is less than the kingdom, and all will be revealed. Reformation, renewal from within, is written into its DNA.
Where do we think it is all going, and what longing gives rise to the community’s passion? What kind of hope inspires Christians, and how do they incorporate this dimension in their art, beliefs and song?
‘Christendom is dead. The Church as Jeremiah and Paul knew it is resuming its character as a movement, a pilgrimage.’ (James A Sanders)

Right Wing danger:
becoming mired in existing structures to the point of paralysis. Taking them too seriously; turning them into weapons to butress confidence or exclude others, producing a Church process driven by fear and compulsion, rather than inspired by passion and hope. Taking the past too serously, and the future not seriously enough.
Left Wing danger:
turning hope into a political programme and absolutizing it, whilst losing a grip on the historical roots of faith — an under realistic sense of the deposit of faith, and over realistic sense of ideals. Taking the future too serously, and the past not seriously enough.
Perpetual Issue:
Misunderstanding the provisionality of the whole exercise. With everything dissolving around us, we travel on the cusp of the world to come with no enduring city. Our actions require anchoring, or, to change the metaphor, our static elements are springboards for action not absolutes.

One side effect of the interaction between Intense Debate and Blogger seems to be that the Comment Counter shows 0, when in fact there are some! Please click comments, and it is possible to leave them. They just don't show up on the Blogger counter... Will investigate.