Rocking all over the world? 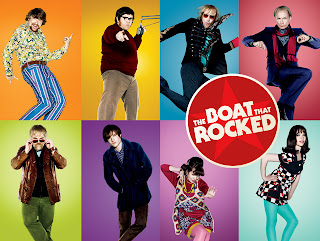 The Boat the Rocked is garish, jolly rumbustuous and profoundly nostalgic for anyone who ever tuned their tranny radio under the bedclothes, or owned a Dansette. Its cast of misfits and Barons of Beat is as superb a gang of British character actors as you will ever find bobbing around in the North Sea twenty miles off Lowestoft. Bill Nighy is a true diamond geezer. You even get Ken and Em chucked in for good measure, ranged appropriately on opposing sides. The plot is simple, perhaps a tad too simple, but whaddaya experct? King Lear? The film also has an authentic sixties coming of age subtext. The music is the Right Stuff, served up immaculately, although one may wonder why the needle never skipped, even as das boot crashdived. 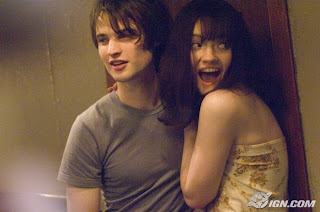 I should also lay cards on the table and say I am, at heart, a Richard Curtis fan. Why shouldn't people make films about sweetness and light? However, sadly, something was missing, and I can’t quite put my finger on what. Did everyone enjoy themselves just a bit too much making it? Is the plot just too twiggy? Are the waters too shallow? Is there, in fact, a natural limit to the fun that can be had out of a bunch of bachelor boys bobbing around on the ocean in NHS specs with rubber johnnies but no girls? 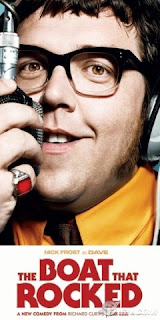 Back in the 60’s popstars made uniquely British teenage “keep your hair on, daddy-o” middle class romps. The concept took a bunch of average grammar school kids — bubbly, rebellious in small ways, and slightly misunderstood. Their dim restrictive parents always turned out OK in the end. For a few years this was a surprisingly popular and compelling formula, for it reflected real feelings. “Come on kids! We’re all going on a summer holiday, in spite of our parents. There’s plenty of pop, we’ve got a real guitar, and we know some girls who may want to join us.” These movies were painfully, authentically, 1960’s. It irks me to admit it, but Cliff Richard was probably the master of the genre. 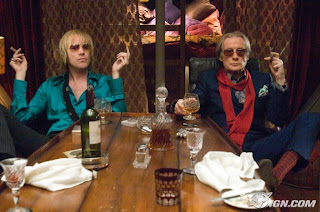 Nobody has been bold enough to make such a movie for at least thirty years, so I applaud the effort, and enjoyed the show. For all its may excellencies, TBTR is probably something of a niche product. It ain’t no Four Weddings, nor is it quite Mama Mia for Males, but if you like the basic pitch and don’t mind the clichéd script and plot, it yield an enjoyable evening out. Another three and a half out of five...

No need to post as this is FYI - "tranny" is currently the word used for a transgender person (at least in the US) -- took me awhile to think what you might mean by having a tranny under the covers.

Glorious, Ann! I think I did have this info stocked somewhere round the back of my brain, but not in the UK sixties English section! And to think that the Radio Oxford kids evening show in the late seventies, presented by Timmy Mallett, was called ‘Timmy on the Tranny!’ No wonder everything's gone to the dogs.

As someone who spent his teenage years (yes, with a 'tranny ..etc'!), campaigned against the Marine Broadcasting Offences Act, visited Caroline's ship and acted out my pirate DJ fantasies on various Restricted Service Licence projects, I am looking forward to seeing TBTR.

I've read quite a bit on the 'it's a bit of fun but unsatisfactory' theme. Perhaps they missed the point that the real sense of 'doing things on the edge' which so attracted many people only really came fully on AFTER 1967. Offshore radion did not 'die in 1967' but carried on, and it's worth listening to the thoughtful Johnnie Walker (the first dj to actually flout the MBA act) whose doing a series of rounds of telly and radio interviews at present.

At the risk of being totally trivial - but in case it raises a smile - the wonderful tranny blog incident reminds me of a visiting US speaker to our clergy three day residential conference a couple of years. Speaking about the need for clergy (and others) to have plans to deal with the stresses which result from the day to day 'toxicity' which can surround us, and drawing on chemical process cleansing imagery, he delightfully told us that 'when the going gets tough you need access to readily available scrubbers'.

The five second silence which preceeded the hysteria was priceless.

Woe is me, for I have fallen for Bill Nighy. There is absolutely no sensible reason I can give for this, and now it looks as though I'm going to have to watch a Boy Movie with (shudder!) 1970's clothing and rubber jokes.

I feel the same way about Mr. Seymour Hoffman! And feel no need to be delivered from madness!

I fear however, that we have wandered from the topic...