Knowing me, Knowing you... 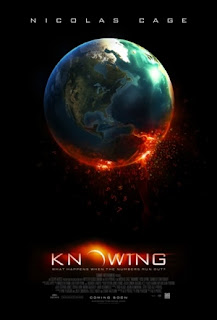 ...there is nothing we can do. Aw hell! I’ve given the plot away in the first line. Rewind. Nicolas Cage used to be a family guy struggling to make sense of life in the ’burbs. In Knowing he’s a single parent trying to bring up young Caleb in a creeepy old house big as the Bates motel, with peeling wallpaper and inadequate lighting. As if that wasn’t work enough for one lifetime, Lara Robinson also lives in Creepsville, one of those dreamy creepy kids who stand around the periphery staring motionless at nothing in particular out of hollow sunken eyes. 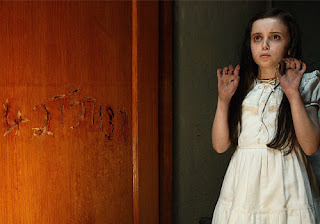 Mum and Grandma both have hollow sunken eyes, too. Back in 1959 Grandma was the village creepy kid. Her elementary school hid a time capsule full of pix of spaceships and things, except for young Lucinda who left posterity a seemingly random jumble of numbers. Fortunately Nico just happens to be Professor of Astrophysics at MIT, actually, and thus eats seemingly random jumbles of numbers for breakfast. How handy. He manages to work out that the numbers are in fact every disaster since 1959, with dates, casualty stats and satnav locations. How silly of Miss Taylor to have buried them in the school yard, when they could have been worth serious money down the bookies. 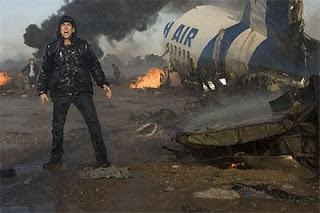 But I digress. There are basically three disasters to go, and they’re biggies, then Boooooom! What? Just Boooooom! Nicolas and Miss Creepykid’s mum take the kids investigating, on their own, of course, at night, naturally, in the abandoned but surprisingly intact trailer where Granny Lucinda overdosed 20 years before. There in the woods, among strange artifacts, yellowing press cuttings, and abandoned washing up, they find the clue that has eluded them. The severed head of M. Night Shyalman? It oughta be. And who are those creepy six footers in the woods? Animé male mannequins? Strayed extras from the Matrix? ET Sock puppets? That would be telling. 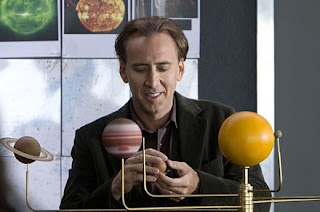 Mr Spock Vulcans may find Knowing illogical; Is Nico losing it? The basic concept is truly great, but it gets a bit silly as it rattles along its deterministic track. One might also wish that everyone except our intrepid hero wasn’t quite as slow to believe of the numbers something so bleeding obvious to the rest of us. Mr Cage is developing a real Nixon drawl. Unfortunately, for UK fans, he is also beginning to look disturbingly like Jonathan Ross. But what’s not to like in this movie? The Creepy kids do creep, the moon is bright tonight, and the disasters are served up right on time and steaming hot.

I’m not proud to say it, but I rather liked this movie. It’s well made and slickly edited, although the end does go on a bit. The climax that I mustn’t give away may disappoint CGI afficionados, and the disasters may wobble a bit. Howbeit, what would be left of most horror films if we got all soapy and puritanical about them. Abraham Lincoln once said “Folks as like this kind of thing are gonna find this is the kind of thing that they like.” I think it was Abe. Should have been anyway. Tread softly, because you tread on our nightmares, and have fun. Three and a half out of five. Or Seven out of ten. Or Cosine Pi over root K times one hundred fifty six.

PS if someone who’s seen it would care to explain the space bunnies I’d love to know. Are they just pets, or symbols of fecundity, or educational objects for a brave new world?

Actually it was Miss Jean Brodie (or, technically, Muriel Spark), explaining why she disapproved of the Girl Guides ("For people who like that sort of thing, it's the sort of thing they like"), but never mind *g*