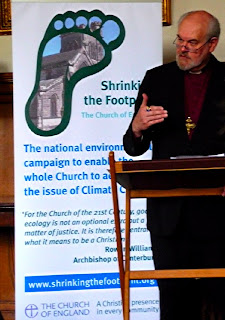 The Church environmental campaign (Website and resources here) held a launch day at Lambeth Palace, led by the Bishop of London and Joan Ruddock, UK Minister for Climate Change and Energy. People were there from every part of the country, with interesting local presentations from Exeter, Newcastle and London dioceses. This took me back to our various awareness raising sessions in the diocese in 2007, and reminded me how far we have to go.

It’s now over 30 years since the Lambeth Conference called for “Urgent and Instant Action” on this one. That call was followed by 20 years of doing almost nothing! These were the days of Mrs Thatcher, with her famous ignorance and antipathy about alternative energy. The outlook now is entirely different, as exactly the events the scientists indicated would happen are unfolding around us. 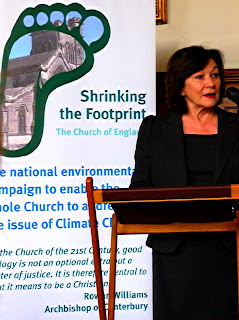 There has been real progress in the past 10 years, and scientific arguments which seemed so notional in 1978 is obvious and almost universally accepted now. This is a whole world issue — the UK only contributes 2% to the whole, but someone's got to give a lead. Copenhagen is absolutely crucial. To get it right world leaders need to pitch something real, but also doable. After years of childish denial and idiocy from US Governments, Obama is on the case, gathering the 16 nations who account for 80% of global emissions. This has to be encouraging. 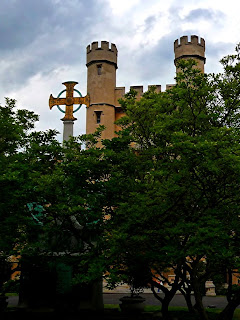 People stick heads in the sand because they fear the consequences of confronting our fantasies about infinite growth and consumption, which has been the only show in town. Theologically, Christians have a rich tradition. It’s not just our measured pattern of feasting and fasting. There are big Scriptural concepts there — Shabat, Noachite Covenant, Shalom, Jubilee, Proportionality in reaping, Usury as a sin, Stewardship, and the vision of a whole earth groaining in futility for redemption. These are core messages of our theology, even if we’ve rather lost sight of some of them in the last century. It’s obviously time to focus on them again. 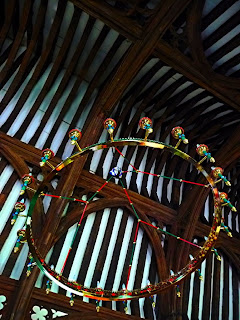 So what do we do? As well as joining anyone willing to come along on a public awareness changing exercise, the Carbon Trust, with whom the Church has been working closely, has developed a 5 Stage response model:
We need to run several cycles of such processes at every level in our operations, building numbers of Eco-congregations, backing change in our schools (which account for a huge proportion of our emissions), managing buildings in new ways, changing our ways of life.. People need a bit of leadership and it’s all hands to the pump. Actually, there’s an immense amount of awareness and common sense in the UK about this, and the Climate Change Act was carried through with careful cross party preparation on the basis of common understanding. 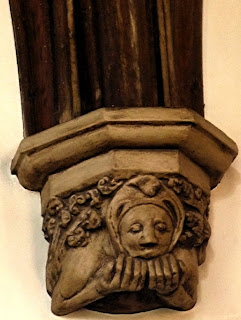 We just have to get our rear ends into gear. The Enemy is Whinging Pom Cynicism, both corporate (“Anything that doesn’t solve the whole problem instantly is only a futile gesture so we’ll all have a good laugh at it”) and personal (“What I do doesn’t make a difference, so I think I’ll just carry on doing nothing”).

Pragmatically, the choices seem to be
The fact is we will have to do some of all three. How much of each is, to a certain extent up to us. Inaction like that which followed the 1978 Lambeth Conference call for urgent action will not get anyone anywhere, and there is time to make up.
Posted by Bishop Alan Wilson

The UKs only not-for-profit gas and electricity company is based in Oxford diocese, in Witney, EBICO. We are the largest of the 'little 8' companies and have the best record of all companies (ie the 'little 8 and the 'big 6') for customer service. We also have the lowest number of customers who move away from us across all companies.

Our remit is to help those in fuel poverty and in particular those on pre-payment meters, often those on the lowest incomes. We are also very concerned about climate change; at Greenbelt 2008 we launched our "Fuel Poverty Challenge' when we challenged people to reduce their fuel consumption by 10%.

We are all committed Christians and it has been exciting to see that it is possible to run a commercially viable company without compromising our Christian faith. We have been in business for slightly over 10 years.

Our Chairman is a well known consultant to the international coal industry as well as being a parish priest.

The third enemy is our own selfishness: "I don't see why I should do it if They don't!"

In fact, that's probably the one I personally battle with most:-(

Music to my ears.

We all have to remember that we are stewards of the environment albeit for a ralatively short time.

Amen. The Church in Wales has just launched 'The Parish Green Guide - Caring for God's Creatino' which includes a very simple and helpful checklist which can be used by any parish. The text is (I think!) downloadable from the Church in Wales website. Locally we've taken material Welsh schools use for the children to conduct a green audit of their schools, and adapted it to the form of a simple audit which Key stages 1/2 can use on a visit to their local church - results can be presented to PCCs!
It's not rocket science! As you suggest it just needs getting on with!
Adrian (member of St Asaph Diocese Eco-Group).