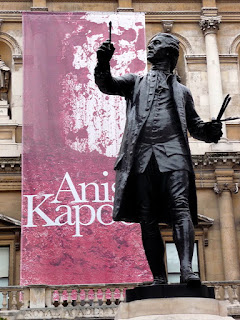 Arty types will recognise from my blog header my respect for the work of Anish Kapoor. It was a great joy to spent a day off yesterday at his latest, largest and most absorbing exhbition at the Royal Academy. He’s still fascinated with space, bigtime, playing with mirrors and reflections. Vistors are greeted by a socking great pile of 76 mirrored bubbles in the courtyard outside which, like Cloud Gate, entertains all day. 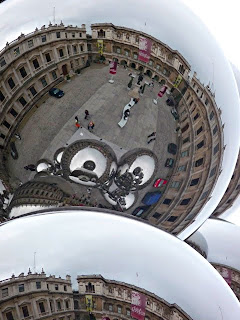 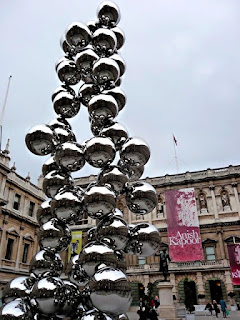 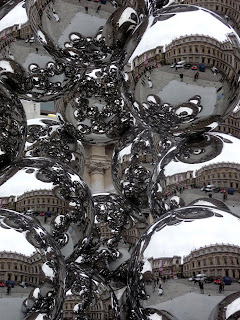 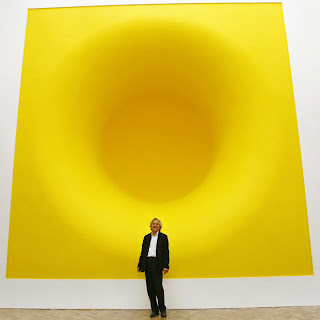 Inside, there’s a good selection of dense colour works — strangely deep and absorbing even in poster paint primary colours. Somehow he manages to make the spindliest and sharpest geometry look as though it was simply powder that could blow away at any moment. As ever, he’s interesed in the plane as well as the shape, with a pregnant wall, hinting at things to come — a wall of pure sunshine orange that turns out to have depth when you get close to it (denser of not quite as monumental as the sun in Olafur Eliasson’s Weather Project at the Tate the other year). 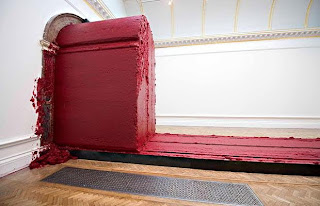 So far, Kapoor been before. The new dimension is goo. There’s dusty scatalogical goo, that being intestinally shaped coils and turns of concrete loaded on pallets like piles of guts or one of those snake scenes in an Indiana Jones movie. “Greyman Cries, Shaman Dies, Billowing Smoke, Beauty Evoked” is the finished resentable title. Many fellow visitors were drawn into the texture of various squigglies loaded on the pallets, longing to touch. 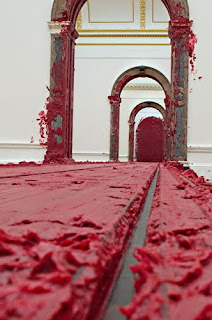 But the most spectacular way Kapoor claims his space, blasting it out or dominating everything, is with shimmering waxy scarlet goo. For those who like their goo monumental, Svayambh (Sanskrit for “self-generated”) is a 40 ton slow train that takes one and a half hours to scour its way through five galleries, splashing blood-red wax and vaseline on the high imperial gilded arches as it goes. Like the original juggernaut it slides noiselessly through the huge space, drawing children of all ages back again and again to check on its progress. 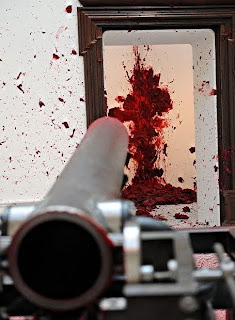 If you prefer indoor fireworks, there’s Shooting into the Corner. Every twenty minutes a ritual is enacted by which a shell shaped red wadge is fired at the wall of the next gallery, filling the smaller room gradually with goo. Even though it’s powered on compressed air, I would guess, and there’s no conventional explosive bang, the whole thing makes a predictably intense indoor game. Various people near me were holding their ears, and somebody near me jumped. The kids loved it. 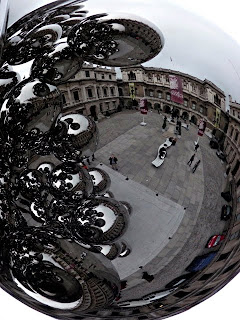 The show manages to be a monumental, dynamic and playful workout for the imagination. I shall certainly be back before December.
Posted by Bishop Alan Wilson

Thoroughly enjoyed your review of the Anish Kappor exhibition Alan. The "Shooting into the Corner" installation has proved to be a huge success and people of all ages have really taken to it. If you are still interested in seeing the outcome of the piece then you can keep checking the live webcam feed that will be streaming up until the last day of the exhibition which is December 11th. http://bit.ly/hMZQ4 Once again great article!