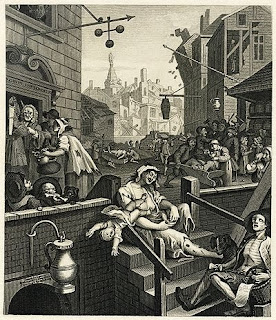 Musical biopics are a funny old genre. Song of Norway is a nice film. People who hate that one, however, may enjoy Mat Whitecross’ Sex and Drugs and Rock and Roll. This chaotic picaresque romp contains lashings of all three — exactly what it says on the tin. It’s a 1980’s Hogarth — like Gin Lane 250 years ago, a riot of grotesque caricatures, much exaggerated swearing and snarling rending the air, sordid and messed up relationships.
Very Punk. If you hate Punk music (and be honest, that’s what you’re meant to do) you will probably think this film is no more than a filthy old mess. The script is a coarse riot. Crude rumbustuous jumble is relieved by curiously clinical flashbacks to a nasty 1950’s Spastics School. This stands for a succession of Establishments against which Dury rebelled in his youth, including Wycombe Royal Grammar School, briefly attended in the fifties. Various iconic moments, such as Dury’s punchup with Omar Sharif, are alluded to but not portrayed. 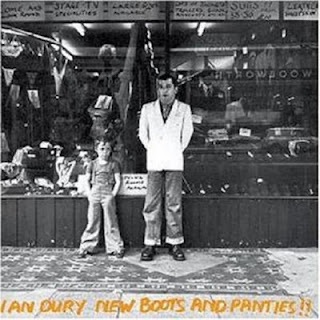 So what of Ian Dury? He caught polio at age seven, he believed from a swimming pool. His schooldays were nasty, brutish and degrading, kindling lifelong rage and a rejection of all adult authority. His grown days were one perpetual run-in with the bottle. Especially after he’d had a few, he saw himself as a kind of Spartacus figure for disabled people. He pioneered wearing of razor blades as ear rings. While his band was based in Aylesbury he drove a maroon van bearing the words “Danger — Inflammable.” Bus full of nutters. 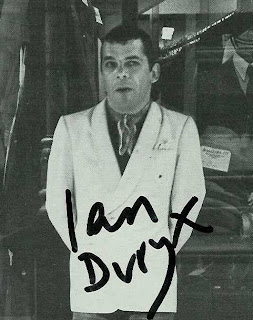 Dury was capable of moments of great affection, but fundamentally incapable of sustaining a grown-up relationship. He was an atrocious husband and father, but one who raised atrociousness to an art form. One sub-theme of this film parallells his parenting performance with that of his own old dad. Dury was very clever with words, and his furiously alienated stance made him a kind of mirror for the rest of us from somewhere way beyond decent society. 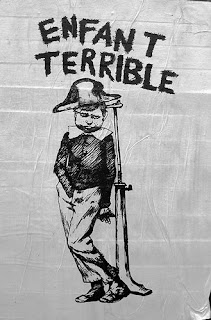 The film’s highlights are its occasional set piece numbers, includng such unexpected surrealistic pleasures as Hit Me with your Rhythm Stick performed underwater in a swimming pool, delivered with blazing energy and freewheeling anarchy. The film’s climax, though, is a riproaring Cover of Ian Dury’s contribution to the International Year of Disabled people (1981, you remember) — tastefully entitled Spasticus Autisticus:

I'm spasticus, I'm spasticus
I'm spasticus autisticus
I wibble when I piddle
Cos my middle is a riddle...
Hello to you out there in Normal Land
You may not comprehend my tale or understand
As I crawl past your window give me lucky looks
You can be my body but you'll never read my books...
I'm knobbled on the cobbles
Cos I hobble when I wobble
Swim!
So place your hard-earned peanuts in my tin
And thank the Creator you're not in the state I'm in
So long have I been languished on the shelf
I must give all proceedings to myself...
54 appliances in leather and elastic
100 000 thank yous from 27 spastics...

Ian Dury himself would have loved the look and feel of this film, probably as much as, if not more than, Grieg would have enjoyed Song of Norway. Andy Serkis does an energetic, more than capable job of impersonating the Diamond Geezer, assisted by authentic Blockheads. This is quality casting and acting, ladies and gentlemen. If you’ve given up reading this in disgust, Mr Dury would be tickled pink. If you haven’t, you probably should try and catch this film while it’s going by. I suspect, however, that its blend of blazing anger, pungent irony, verbal tiddlywinks, and angry toilet humour will not easily travel far beyond these shores. 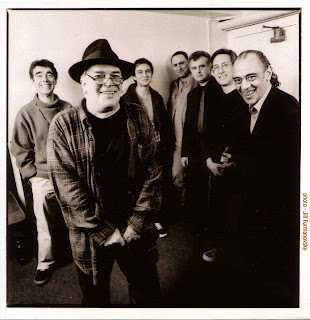 Dury’s basic questions about how exceptional people are seen in society, their room for freedom not to be helped by well-meaning people, a notional right for anyone to define themselves however they damn well want, disability and autonomy, could still do with answering, thirty years on. And punk? Like most fashions it probably wasn’t all it was cracked up to be. It seems little more than a rabid “Mr Angry” protest against the stifling conventionality of Britain in the fifties and sixties. Its incoherence makes it more like a burp in the face of the Establishment than an alternative way of life. Take away the object of its loathing, and all that is left is sound and fury, signifying, er, not a lot. But Dury’s fury was profoundly authentic, and this film is worth a look, especially if you are intrigued by the raw energy of Punk. I wouldn’t, however, take my mother in law. Seven out of Ten stars.

Price of a movie ticket - $15
A bishop who likes a movie about a punk legend? - Priceless!

We need you in Australia Bishop Alan

Thanks for the review. There's always been a bit of Ian Dury which repels me and I suspect he'd be pleased with that. At the same time his music and words were part of the soundtrack to my wife and my early relationship. We met in Essex so that helped and much of his imagery is indeed rooted in Essex laddish culture. What always strikes me is that amidst that often very crude imagery there often lurks a voice of truth - Drury seemed to tell it like it is for so many people and, if you didn't change the track in disgust you often actually learnt something. If I read the lyrics today to 'Sex and drugs and rock and roll' I don't like them but, hey, it's a track I still play, and it some strange way it makes me smile - which is what Ian D often did.
Somehow he always reminded me of character I knew vaguely around Colchester, Essex in the 1970s. Self-named as 'Flid' (a kind of word-play on an Essex pronounciation of Thalidomide - 'flidmide') Flid had two stumps for arms but chose to make his main purpose in life that of being a rock drummer - and a good one too.
Character that stand against rather than for things can seem difficult to deal with but they tell us something indeed as you suggest - and when their own personal story seems to mirror the spirit of the times (it's surely the beige, middle-brow,blandness that punk followed that provided so much of its energy)as it seemed to do in Ian Dury's case it is a powerful thing.
I'm looking forward to seeing the film now!

Often we forget the little guy, the SMB, in our discussions of the comings and goings of the Internet marketing industry. Sure there are times like this when a report surfaces talking about their issues and concerns but, for the most part, we like to talk about big brands and how they do the Internet marketing thing well or not so well.

Read more about Ian in 'Ian Dury: The Definitive Biography' by Will Birch
http://www.amazon.co.uk/Ian-Dury-Definitive-Will-Birch/dp/0283071036/