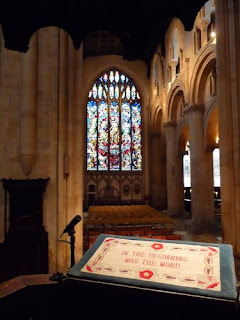 Oxford Cathedral this morning, to celebrate Lady Day with trustees, office holders and members of the Mothers Union from around the diocese. MU works in 78 countries around the world, has 3·6 million members, and a representative to the United Nations Commission on the status of women. People seemed refreshingly focused on others and open to accepting them as they are, strengthening marriages by networking women all over the world, and a few men. The emphasis is on bringing about a world where God’s love is shown in loving, stable, respectful relationships. 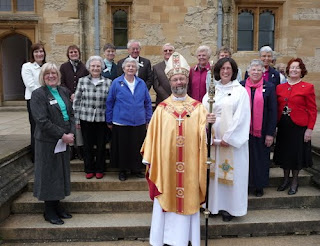 The view from the pulpit in Christ Church is interesting (above). I took as our text for the annunciation a notion first planted in my mind at a Berkshire nativity play a few years ago by the seven year old who had landed the part of Mary — “everybody knows it’s much easier to be an angel than a virgin.” 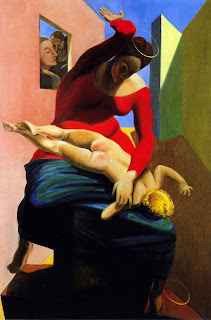 And, as daffodils begin to bloom in these parts, a slightly off the wall but powerful poem by Carol Ann Duffy, based on Max Ernst’s painting of 1926, The Blessed Virgin Chastises the Infant Jesus before Three Witnesses:

The Virgin Punishing the Infant

He spoke early. Not the goo goo goo of infancy,
but I am God. Joseph kept away, carving himself
a silent Pinocchio out in the workshed. He said
he was a simple man and hadn't dreamed of this.

She grew anxious in that second year, would stare
at stars saying Gabriel, Gabriel. Your guess.
The village gossiped in the sun. The child was solitary,
his wide and solemn eyes could fill your head.

After he walked, our normal children crawled. Our wives
were first resentful, then superior. Mary's child
would bring her sorrow ... better far to have a son
who gurgled nonsense at your breast. Googoo. Googoo.

But I am God. We heard him through the window,
heard the smacks which made us peep. What we saw
was commonplace enough. But afterwards, we wondered
why the infant did not cry, why the Mother did.

I find this painting horrifying - especially in light of the current child abuse revelations. I am opposed to spanking as it only teaches children that big people can abuse little ones.

I love that poem. Very powerful indeed!
I have never really thought about what Jesus might have been like as a child ...

Have you read Anne Rice’s series Christ the Lord? Duffy’s poem resonates powerfully with some of the themes Rice explores.
The first book Out of Egypt (http://bit.ly/axdaaV) covers Jesus as a boy and the second The Road to Cana (http://bit.ly/alETLl) as a young man. What I found intriguing is that the books are written in the first person and set the mind racing with all sorts of questions about the implications of the incarnation for Jesus, his family and the wider community.

Ann, do you think Mary may have smacked Jesus?