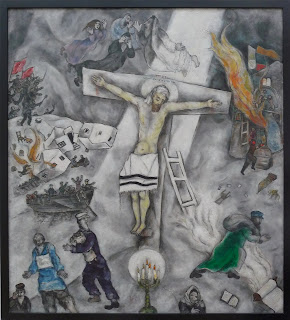 Good Friday — Here is a poem by Les Murray, which explores why Jesus died and how all his persecutors, friend and foe, could actually be redeemed:

We moved in on him slowly
Under the incalculable gravity

of old freedom, of our old freedom
under atmospheres of consequence, of justice

under which no one needs to thank anyone
If this was God, we would get even.

And in the end we nailed him,
lashed, spittled, stretched him limb from limb.

We would settle with dignity
for the anguish it had caused us,

we’d send it to be abstract again,
we would set it free.

*
But we had raised up evolution
It would not stop being human.

Ever afterwards, the accumulation
of freedom would end in this man

whipped, bloodied, getting the treatment.
It would look like man himself was getting it.

He was freeing us, painfully, from freedom,
justice, dignity — he was discharging them

of their deadly ambiguous deposit,
remaking out of them the primal day

Good Friday is a day to address St Paul’s teasing question to the Galatians, “who has bewitched you, before whose eyes Christ was publicly portrayed as cricified?” to ourselves, and dedicated followers of some contemporary fashions: