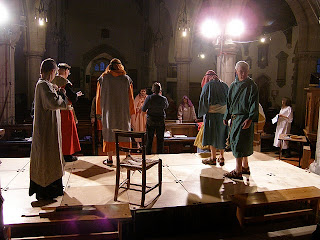 Since the publication in 1986 of Lent Holy Week and Easter, churches have increasingly enriched their observances. Real ashes on Ash Wednesday, Palm processions, and the washing of feet on Maundy Thursday are now found all over the place where once they were rather top shelf activities. 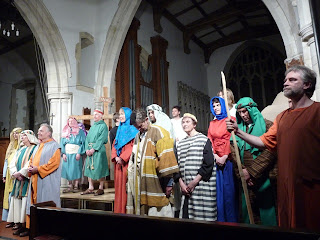 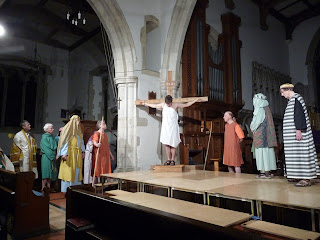 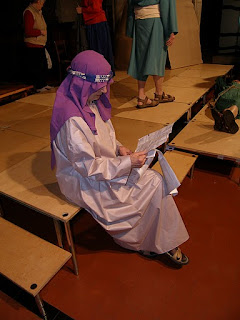 This week Great Missenden Parish Church is putting on a simple Passion Play, locally produced, developed and resourced from scratch by a group of friends led by Brenda Harris. It’s certanly a fresh way of being drawn into the story. Being in the cast also draws people together, strengthens community, and enables everyone to experience the story from the inside out. What is lost in Broadway slickery is regained, and more, in impact when you know all the people on stage, and off. The short play comes with a simple meal in Church for those who want it, and 7·30 tonight is the last performance, for this year. 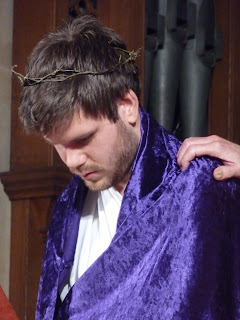 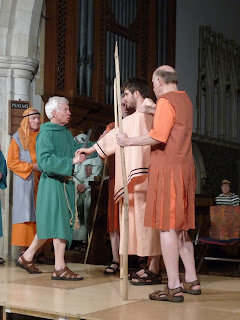 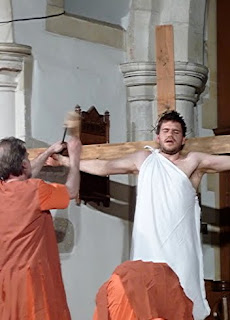 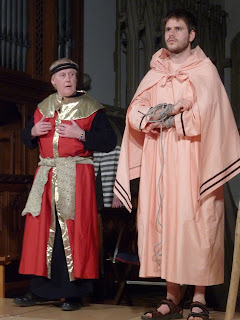 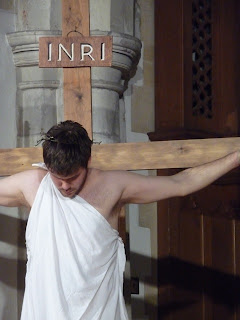 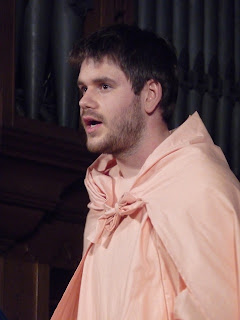 This is a brave and moving endeavour for a local Church. Holy Week is a time to explore the story personally, and this production certainly brought it to life.

The use of drama in Church grew through the middle ages, aided by Franciscan spirituality with its cribs and other visual aids. Plays became suspect, though, for their embellishments and, perhaps, their inherently hazardous blend of doctrinal creativity on the hoof and local colouring, seasoned by all the precariousness of a live show. 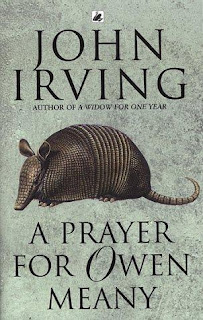 Afficionados of full-on Anglican Life and Literature cannot forget Reverend Wiggin’s Christmas Pageant at Christ Church Gravesend New Hampshire. This is one of the finest pieces of comic writing there is, in the Quintessential Anglican novel, John Irving’s A Prayer for Owen Meany. The Christmas Pageant, recounted with undersattement and comic tension worthy of Joyce Grenfell, is an irrestible imbroglio from which Owen rises heroically

‘What’s wrong with the Christ-Child?’ Barb Wiggin asked.
‘ALL THOSE BABIES,’ Owen said. ‘JUST TO GET ONE TO LIE IN THE MANGER WITHOUT CRYING. DO WE HAVE TO HAVE ALL THOSE BABIES?’
‘But it’s like the song says, Owen,’ the Rector told him. “Little Lord Jesus no crying he makes.” 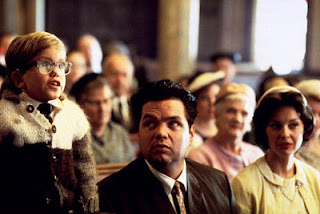 ‘OKAY, OKAY,’ Owen said. ‘BUT ALL THOSE BABIES - YOU CAN HEAR THEM CRYING. EVEN OFFSTAGE YOU CAN HEAR THEM. AND ALL THOSE GROWN-UPS!’ he said. ‘ALL THOSE BIG MEN PASSING THE BABIES IN AND OUT. THEY’RE SO BIG - THEY LOOK RIDICULOUS. THEY MAKE US LOOK RIDICULOUS.’
‘You know a baby who won’t cry, Owen?’ Barb Wiggin asked him — and, of course, she knew as soon as she spoke... how he had trapped her.
‘I KNOW SOMEONE WHO CAN FIT IN THE CRIB,’ Owen said. ‘SOMEONE SMALL ENOUGH TO LOOK LIKE A BABY,’ he said. ‘SOMEONE OLD ENOUGH NOT TO CRY.’
Mary Beth Baird could not contain herself. ‘Owen can be the Baby Jesus!’ she yelled. Owen Meany smiled and shrugged.
‘I CAN FIT IN THE CRIB,’ he said modestly.
Harold Crosby could no longer contain himself, either; he vomited. He vomited often enough for it to pass almost unnoticed, especially now that Owen had our undivided attention... 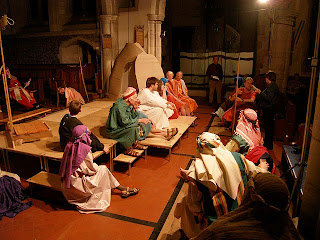 I’m not sure people this side of the pond are yet ready for such glorious experiences, but, this worked better than that. Seeing neighbours and friends in the story helps us locate ourselves within the plot. The play was well-supported, and may well develop further in future years...
Posted by Bishop Alan Wilson

As an 18 year old I took part in the York Mystery Plays, also entirely locally acted (although Victor Bannerjee was, an excellent, Jesus) - it was an incredible experience and education.