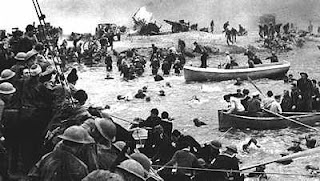 Something of the scale of Dunkirk becomes apprent from the fact no fewer than four friends turn out to have parents who were evacuated or otherwise involved at the sharp end. The Wilsons being avid scribblers, who threw nothing out, we have boxes of World War II at home. In May 1940 my Father was in Kent, not France. His mother, however, an invalid with Parkinson’s Disease, supplies an interesting old lady’s eye view of the unfolding history:

I’ve got in such a muddle over this war you’ll really need leave soon to tell me whether we’re going or coming, who we’re protecting next? when Hitler’s going to heaven & if statesmen shouldn’t be abolished! I feel I shall never wake up without “Dunkirk” being the first thought. What a ghastly history! Which all the heroic adjectives of the language can never disguise for the relatives of those for whom there is no return. Are they lucky or we I wonder? 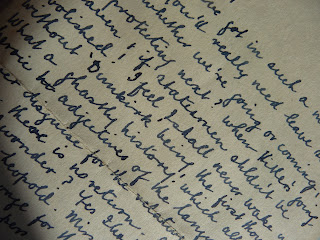 Her letters record interesting incidents — the crash of a German Bomber in the Bishop of Chelmsford’s garden in June with four airmen burned to death — amidst more reflective thoughts. This, for example, from Chelmsford (where her cousin lived) on the day before Paris fell:

I came here by car and we were stopped about Margrettng for identity cards & with all place names removed we felt quite foreign. Expect you will be glad it's cooler especially if there’s more digging to do. What ghastly news again — nearly another Dunkirk — what blue pencil luck we have had everywhere — surely it must be our turn soon. I have to ration myself to news but there seems always some horror to listen to and for the men you have met and passed on [my Father was serving in a training unit in Kent] just to be wiped out in thousands — such a tragedy of useless waste. What a life! so much beyond our control. It’s no use trying to write about it & yet one cannot keep from thinking about it. Just our destiny to go one road or the other so it’s only courage is any good. I hope you are beginning to feel as tough as a gangster. Meanwhile I still dream of a real miracle & Hitler into little pieces...