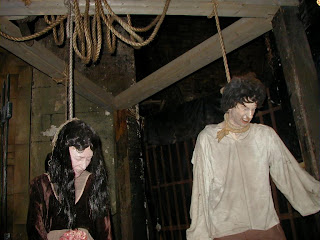 My children are amazed as I tell them I worked in a prison long enough ago to have met a clergyman who had officiated at a hanging in England 30 years before I knew him. I remember there being an execution suite in HMP Wandsworth in the 1980’s, just in case.

“Suspended sentences,” as one POA wag used to call them, struck my children as an extraordinary survival from an age of barbarism, like witch trials or the Iron Maiden. I promise my children, to stares of disbelief, that this grotesque carry-on, happened (but only just) in my lifetime, and was only finally abolished in 1998. 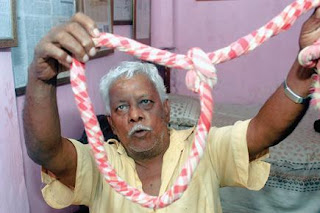 But there seem to be two distinct ways to abolish the death penalty. You can pass laws, as in the UK, or just leave it to the moral instincts of potential hangmen. In India no-one is willing to do it any more, according to this week’s Delhi Open magazine:

In Pune’s Yerwada prison, there are 11 convicts who have been condemned to death by hanging. Kept in solitary confinement in the barracks close to the gallows, some of them have languished there for nearly a decade. Their mercy petitions have been rejected by the President. But it is unlikely that they will be hanged anytime soon. Maharashtra does not have a hangman. The two prisons in the state where hangings are carried out—Yerwada and Nagpur Central—have sought executioners from other states but no one has responded. It seems there are no hangmen in the country. They are all retired or dead.

To kill a man, the Indian Government pays Rs 150. The job of a hangman is not a full-time government post. He is a sanctioned volunteer, his pay a special allowance. Hanging involves techniques and procedures very simple to learn, simpler than probably learning how to drive a car. Senior police officials are willing to teach them to anyone who comes forward, but no one does.

Officials at various central prisons across India confirm that they are unable to find hangmen even though the candidate need not have any previous experience, nor does he have to be literate. It is a strange situation in one of the few countries in the world that still have capital punishment. India has about 300 prisoners on death row. 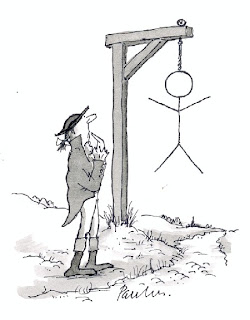 For the princely sum of £2 a go, you’d think someone would be interested, but apparently people are afraid of stoking up bad karma. In a sudden rush of public disgust at terrorist attacks in Madhya Pradesh one man actually came forward and offered to hang Afzal Guru. Unfortunately he was 82 years old, and died before the job could be done. So, with a whimper rather than a legal bang, hanging seems to be finally on the way out in India.

Thank you so much for posting this. It really made my day (on a difficult day) to learn that there is a nation that has the death penalty on the books but can't find anybody motivated to carry it out. I mean, really, in that whole huge country with over a billion people, many of whom could use some quick cash, they can't fill this temp job? Granted that Hindus and Jains would have religious issues around killing, there are still great numbers of Muslims, Christians, Parsis, Sikhs and so forth, and none of them is stepping forward either. Looking on from the USA, where many states continue to practice this type of legally sanctioned murder, I find this report inspiring, and would not file it under 'silly'. (Though it is pretty funny that the one old guy who volunteered for the job didn't live long enough to carry it out.)