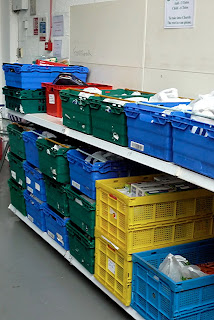 A busy, foodie week, in the worlds of media, local charity, and academia. A lot of time has gone into work with my friend and colleague Carole Peters, devising and preparing the BBC Radio 4 Sunday morning service next week on Lammas — the original havest festival. Our theme has been Bread of heaven, with music, readings and a meditation — all UK insomniacs not in Church at 8·00 next Sunday welcome! 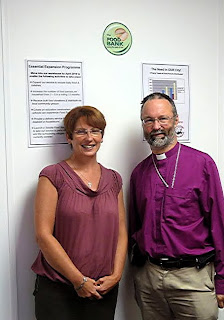 Meanwhile, yesterday, I spent a morning with Sue Wall, who runs Milton Keynes Food Bank. I’ve often noticed the food pantry ministryies of US Churches and wondered why they didn't happen more in the UK. Perhaps, I thought, it’s because the welfare state means the need is less. That’s a nice thought, but way off base with reality. 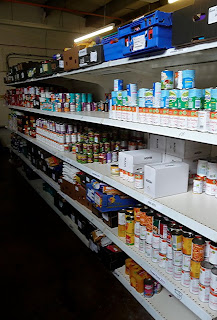 It’s a disturbng fact, but even in an outwardly prosperous city like MK, many ordinary people, especially at times of crisis, struggle to feed themselves and their families. We live in a welfare state, but the largest single cause of temporary need is delay in benefit payment; for example if someone on benefit gets a part time job, it can take two weeks and more whilst benefit is adjusted, whilst they have no money coming in at all. 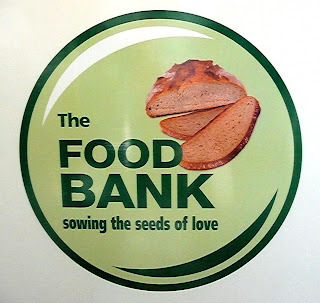 MK Food Bank provides a limited number (up to 6) short term (3 day) packs of simple but high quality food, made up to a standard nutritional specification. It began as a ministry of MK Christian centre, a thriving non-denominational Church in the city, and now engages all sorts of volunteers, mainly but not exclusively from the whole range of churches. 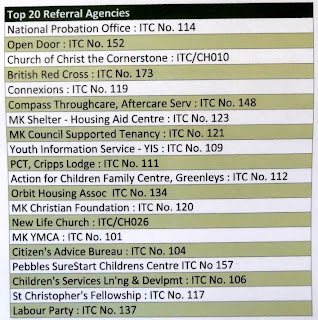 People are referred through a variety of agencies, and parcels can be collected from various local collection points. The work began in a Church cupboard, moved into a sea container, and now has its own warehouse unit in Stacey Bushes. Food comes from donations, including some from leading supermarkets. Local businesses, especialy Mercedes Benz, whose HQ is in the city, have also backed the project with sponsorship and services. So far this year over 4,400 packs have gone out. MKFB began as part of, and still operates in close collaboration with the Trussell Trust, an Evangelical Christian chatity that fights Poverty, deprivation and despair in the UK and abroad. It was an immensely moving privilage to spend a morning with Sue and some members of her team, to see how many parallel lines our passion run along, and to pray together. 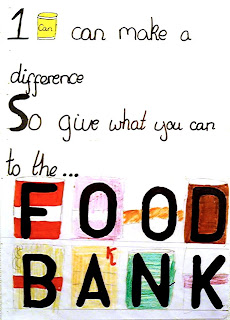 Finally, yesterday, an afternoon teaching in the Business School of the University of Buckingham, where a wonderful colleague, Andrew Lightbown, is conducting fascinating doctoral research with which I’ve been helping into the meaning and dynamic of Agape (Love). After my lecture we reviewed his work together, including an emerging working definition of Charity which struck me as relevant to MKFB, as to all expressions of Christian love in action:

To exercise Charity is to act intentionally to promote wellbeing in solidarity with, and reverential response to the other.

Thanks for this post, and for the fascinating links, especially to the Trussell Trust. My Canadian duaghter-in-law works for a Food Bankover there and I have been wondering why such things aren't on our radar over here. I think we DO often assume that the welfare state handles it, but we also know there are cracks in the system that need to be filled. It is good to know that rhere are churches and Christian groups leading the way in this. Very thought-provoking. Thanks again.

Sounds like a fascinating week. And I particularly like the definition of charity -- thank you for it!

Thanks for the post. Many parishes here in the US do have food bins for food collection. Our parish dontates about 300lbs of canned goods per month to the local food bank and we also volunteer at the soup kitchen once per month. Even though our local gov't does care for the poor there is so much more to do. I love the quote from St. Francis, "Always preach the gospel, use words if you have to."

Thanks for this post.
Will be really interesting to read more about agape in systems - I had been thinking about exactly that phrase in recent days too so it was great to see that I'm not the only one

Really interesting post. I'll be moving to MK soon - I may well go see if they can use a little extra help.

My own (thankfully now over!) experience of the benefits system is a total lack of transparancy which leaves one feeling powerless. I'm not surprised people end up without food money, and chasing up where money has gone is a nightmare.

Great post. Thanks for sharing powerful words to everyone.

May God Bless all of us!