Benefits off the Back of the Envelope 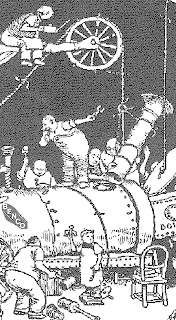 Governments come, governments go. And when they come, they have to translate ideals that raised a cheer among the party conference faithful into practical policy. It’s not easy, and the new coalition deserve credit for trying. So, this week, comes the first draft of a radical shake-up of benefits. This can’t be a sacred Cow, because it’s the Biggie. Any reform that doesn’t affect the largest elements is just tinkering. However, benefits is where rubber hits road for the poorest and most vulnerable members of society, and it is a test of character, a window into the soul, how the system (= the rest of us) chooses to treat them. 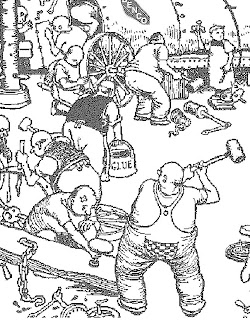 So this week the PM has announced:

Both these notions sound promising, perhaps, until you try to enact them. The scheme for doing the first, assuming it is OK to depart from the principle of Universality, will be wildly inequitable because of the Income Tax system. Household A have one earner of £44K a year. Household B have two partners each earning £42K = £84K. The £84K couple keep their benefit, and the £42K one loses it. Duh? this also puts a hefty premium for the middle classes on not staying home to look after their children, something else people thought this government didn’t want to penalise

Meanwhile in £500 a week Benefit land, presuming people aren’t on the fiddle, if you really do have 13 kids, you really do need £500 a week. Penalising the poor little rats because there are so many of them is positively Dickensian. They can’t help being born.

On the back of an old envelope from years ago is even more radical thinking, associated by some with Sir Brandon Rhys-Williams. He was Tory MP for Kensington (and an MEP) back in the eighties. On the back of his envelope, if I remember it right, he calculated a radical shake up that really was radical.

I don't remember every detail but I think the essence was that everybody, universally, got paid their tax allowance (in those days about £1500) in cash. You abolished all benefits, except child benefit (because children don't have tax codes) and a few given through the NHS for specific care purposes. You then radically simplified the tax system along Isle of Man / Jersey lines so that everybody paid income tax with no allowances, but at a lower rate. On eighties figures, once you abolished all loopholes but reduced the rate so it wasn’t worth cheating, things panned out such that to get the same tax take you would need a marginal rate of taxation around 18%.

This would suit everybody except those who make their livings by playing the system, or helping other people play the system. But transitioning to it would not be easy, and along the way, any government that tried it would pretty much annoy everybody. wonder how an approach like this would model, thirty years on?
Posted by Bishop Alan Wilson

The coalition mantra is to make complex welfare matters simpler to understand. That is laudable, but it seems that we are now so accustomed to a welfare state, that we kick up a fuss at any attempt to change things.

It seems a little simplistic to just cut without means testing and targeting, but they want to avoid means testing.

I feel strongly for the poor and deprived who are going to be effected by these changes to benefits. You cannot drive people back to work, if jobs do not exist for them. And many single parents have little choice but to survive on benefits due to the very high costs of child care.

I am unsure of whether the coalition is radical enough to try the solution you suggest, which is also I believe in other places where it has proven its worth. If we could reduce tax avoidance to zero, it would be a huge boost to taxable revenue to the government.

The iniquity (and inequity) ascribed to this change for Child Benefit belies the reality. In a household where both parents work and earn income outside the home, they have made the decision to bear considerable costs in employing others to assist with care of children and household work. So, the 2x£42K suggestion is relatively hollow.
Certainly, for us, most of one of our two incomes is passed along to employ others to get done all the household jobs which need to be done.
Your analysis makes the age-old error of treating the stay-at-home-mom as a non-earner, when in fact she is a vital contributor.

The simpler income tax system could help but it only solves a small part of the problem because it only deals with people on (sustaining)incomes.

I agree that the idea of paying child benefit to rich people is outrageous, but I don't understand the system enough to have a qualified opinion on means testing. In an interview some economic researcher said a while ago that it was cheaper to administer a universal benefit than a means tested one. It also means that it won't go unclaimed by people who need it.
If that's genuinely the case, we ought not to opt for the outwardly more just and supposedly cheaper solution.

@Paul, the parent who stays at home "just taking care of the children" is always devalued by society, but it's more true of women than of men because anything women do is de facto second-best anyway.

But more importantly, there's a myth that women's wages go to pay people who do "her" domestic job. Maybe you haven't heard of the female double-shift?

We do full-time jobs *and* do most of the domestic work: we do more grocery shoppong, more child care, more housecleaning, and more cooking than our male partners.

The proposed benefit change effectively takes money away from women, who remain the dominant claimants, and coupled with MTA, transfers that benefit to men-who-have-a-woman.

It's not only biased against children but it's sexist as well. But why would anyone be surprised by this?