Another Year: Crack in teacup opens... 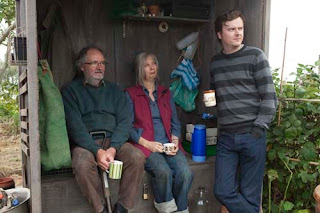 The British kitchen sink which first hit our screens in a Taste of Honey (1961) and the L-Shaped Room (1962) has come of age. All the angry young things have grown up and got their bus passes. Mike Leigh’s Another Year is a beautiful film, rich and compasionate. It has a sometimes painfully sharp eye for detail (with the texture of German films like Heimat), brought to liffe by extraordinary acting captured from a richly compassionate, ultimately life-affirming point of view. The plotline would go on a postage stamp, but I was so drawn into the poinant and sometimes funny characters lives that it didn’t matter. There's as much richness wondring what might happen next with these people as a normal film wold give from reflecting on what did.

So it has no Robocop Godzilla plot, and is woefully bereft, some will find, of cheeky rib-ticklers, but it’s a real connoisseur’s treat if you appreciate British arthouse characterisation and are willing to reflect on the meaning of love, kindness, friendship and happiness as it may be found in ordinary things. 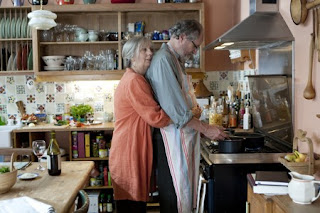 Tom and Gerri (“it’s taken us years to get over that one”) are a warm and wise couple of the Philemon ’n Baucis tendency, he an engineer, she a counsellor, both of them sharing an allotment. They are not experts on life, and their son‘s eventual landing of an ideal mate surprises them as much as anyone. They are, basically honest and compassionate people, and their home is a magnet for needy people especially Mary, whose life has stacked up and continues to stack up as a massive disappointment with only Chardonnay to grease the wheels. Gerri cares for Mary, but only, as Mary discovers near the end, in a professinally bounded way. Family is different. There is no preachy message or overarching consoling philosophy, but in the background lurks a hunch that life, largely what people make of it, can and should be good in the end. The crack in the tea-cup opens, if you remember Auden, a lane to the land of the dead. All the loose ends are by no means tied up, though. 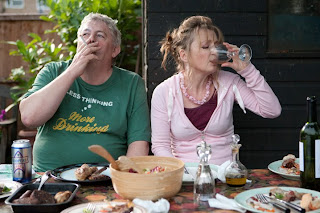 This is not one to watch on a flight, because of its lack of Robocop Godzilla plot, and because the beautiful cinematography and lighting, the sure eye for the right shot, and amazing acting which often feels improvised in the best sense, all call for a proper viewing on a big screen, if not HD and Blu-Ray. 5 out of 5 stars.
Posted by Bishop Alan Wilson