Incarnation: Keep the beginning up front 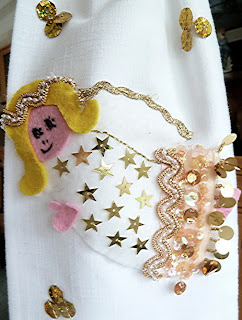 A new decade begins on 1.1.11, with a wondrous gift made by Kim Walter and given me at Bierton primary School, where I went to lead a Christingle service and dedicate a hall extension before Christmas.

The stole simply tells the story that really matters, of God come among us as a child, accepting us the way we are but loving us far to much to leave us that way.This is the foundation of historic Christianity. 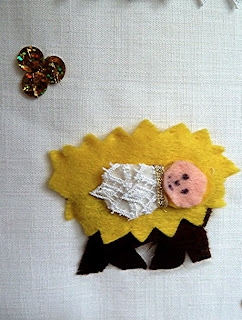 In the manger Jesus becomes entirely part of our world. Everything in the world that God loves is touched in some way. Therefore simple hardball divinity, defined over against humanity, is wrong. Jesus demonstrates the ultimate fatuity of a dualistic notion of what it means to be God. This is ultimately incomprehensible to people who can only believe there is a God who loves them on the basis of serious evidence that their God hates someone else, preferably someone they don’t like. Religion that takes itself more seriously than true humanity easily becomes self-referential and life-denying. The old supremacist religious narrative that sets God over against human nature as a kind of gnostic superman turns out to be a silly bit of idolatry. 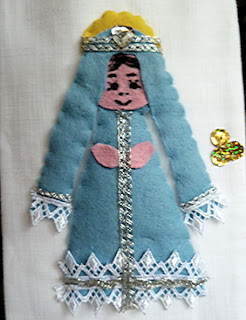 Jesus honoured the Pharisees for their high ideals, but drew attention of a bad Pharisaic habit — straining at gnats and swallowing camels — letting the details of a sub-narrative obscure the glory of the big narrative. Christianity has always been about Jesus and the resurrection — and this biggest narrative of all begins with the Christmas story. The only true absolutes are the baby in the manger, the blood on the cross, the empty tomb on the third day. The glory of the Big Narrative shows up the inadequacy of three popular sub-narratives often mistaken for Christianity:

I keep thinking I want to say something wise about this post, but I just keep coming back to "Right on!"

So, Right on! Thank you. It makes me glad to see someone in a leadership position to say this so clearly.

Love the stole, too.

(WV: tickey. What the clock did last night.)

A new decade... yes, the 21st century is 10% gone, the 3rd millennium 1%. It's like watching one of those disk defragmenter progress thingies. Only in real life, I can only hope the 2nd decade is less fragmented than the first.

I love this post but I keep worrying about this bit:

The whole terminology is inadequate and puerile. Only a fool with a weak grasp of the Incarnation would think such language appropriate to describe anything more than a feeble projection of human anxiety, cheap Pharisaism, left or right wing, masquerading as faith. Best stay out of the whole silly argument, because it is a greedy row, and those who make a life of indulging in it never seem to grow up to anything like their own potential.

What is the row, and who is having it, and does the row need to happen, and am I part of it..? These are the questions in my mind. I suppose the biggest row I see at the moment is about homosexuality.. (or is it).. or is it a post-modern/modern divide. My concern is that some of the most persecuted peoples are also those who the church persecutes :(

A very happy new year ad thanks for comment.

lesley, I'm sorry to be slapdash in explaining myself. The Row is the notion that the whole story of Christianity this century is of a battle between, how can I put it in a non-vaue-laden way, progressives and defenders of the Truth. I'm glad to say very few ornery Christians are, in fact, having it. There's quite enough work cut out loving our neighbours as ourselves to get side-tracked onto sterile culture wars about... well, there are various bones of contentnion, aren't there.

I find it very helpful, if acutely uncomfortable, when you remind me that the Church does not itself have a brilliant track record at being good news. Indeed we have persecuted people and/or made it worse for those who were persecuted by validating the structures within which they are de-personalised and their humanity seen as alien to God — a denial of the Incarnation.

The clever bit is to find a way of subverting the desttructive way the question is framed, whilst not colluding with abuse — not an easy calling, and thanks for the reminder about it.

Hope I haven't made things even more obscure!

Just as I was struggling ith having expressed myself in a rather mangy sounding way about this, to the rescue comes Richard Rohr, making a similar point much more kindly and eloquently in his daily email! he says...

”I founded the Center for Action and Contemplation in 1987 because so many peace and justice people, frankly, disappointed me. They were angry, pushy, and often dualistic thinkers on the Left. They too often perpetuated the problem in new form instead of healing it at any deep level.

As adult Christians, we need to do things from the heart space, not from the ego’s need to assert itself or win any argument. We do not need to be better than or holier than anybody else. There’s no long term moral advance if we merely please our own ego or if the energy is oppositional.

To purify our own motivation, and to be honest about our intentions, is the big hump between the first and second halves of life. In the second half of our spiritual journey, we might continue to do the same things but now from a very different place: We don’t need to win or need to be right. We just do what we are called to do, but then let go of the results, and leave that to God. This is what some call “pure action,” where I act without demanding any particular response or results. One can only do that when they are doing God’s work and not just their own.”

:) I too received the email from Richard Rohr.... I can see what you are saying, and I agree it is the way of Christ- the Narrow Way. And I regularly fail in this respect. I think the trick is perhaps to manage one's anger and despair, and not act out of those feelings.

This may be a disservice to some, but I recognise that groups that have been abused for extended periods of time seem to be easily angered, and I think it is utterly understandable, although ultimately not helpful.

Also, I received this comment on my blog today (which is fairly typical): "If somebody can tell people who are trying to kill the likes of me that it might be worth doing so just to ensure that they don't end up with the sort of tolerant society we now live in, I can't see how there CAN be any conversation between me and him. Sorry. There are people with homophobic views who I will talk to. However, perhaps I should be a better Christian, but I simply can't imagine sharing a pint with somebody who won't unconditionally condemn arguments that I should be killed. And who thinks that the law that decriminalised homosexuality in this country was a mistake."

It takes my breath away.. how would I feel if people thought I was so abhorrent that I should be killed?

Also, (sorry this is such a long comment) I feel like those who stay out of the row sometimes do so, not because it is a bad row, but because they don't care, or because they are concerned only about themselves.. this doesn't seem like a good thing... a bit like the Gandhi quote about non-violence covering impotence..

Thanks for clarifying the bit I was worried about. It is much clearer now :)